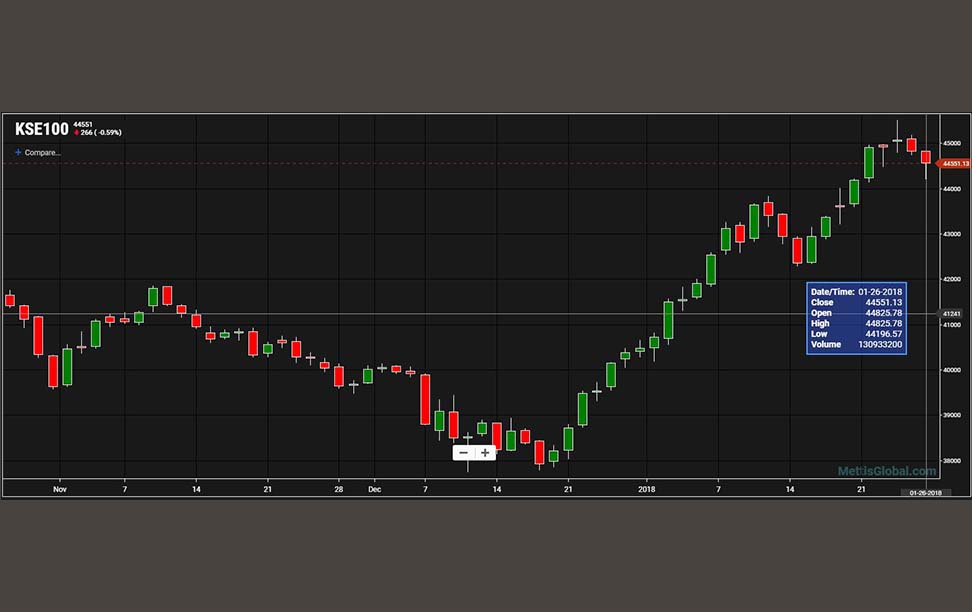 The Karachi Stock Exchange – 100 Index closed in red yet again after trading in red throughout the entire day. Market opened to the negative news of Fitch Ratings revising outlook on Pakistan’s Long Term Foreign and Local Currency Issuer Default Ratings (IDRs) from stable to negative. Bad news after bad news from the market damped the overall investor sentiment for the day.

The index movement was limited within the 629.21 points range.

32 companies closed up, whereas 50 were down at the day end.

FBR’s priority is to cut costs for businesses in...

January 15, 2021: Member Inland Revenue – Operations, Federal Board of Revenue (FBR) Dr. Muhammad Ashfaq Ahmad has said that for the next budget, FBR’s priority is to cut the cost of doing business, get rid of excessive taxation, reduce compliance cost and set businesses free so that they could have minimum interaction with tax authorities and could focus on expanding their business and industrial activities.

Speaking at a meeting during his visit to the Karachi Chamber of Commerce & Industry (KCCI) on Friday, Member IR said that FBR was a stakeholder of 30 to 35 percent in whatever was being earned which was being collected in shape of Sales Tax, Income Tax or Withholding Tax etc. hence, it was in FBR’s interest to make businesses successful and cut the cost.
Chairman Businessmen Group & Former President KCCI Zubair Motiwala, Vice Chairman BMG Anjum Nisar, President KCCI M. Shariq Vohra, Senior Vice President M. Saqib Goodluck, Vice President Shamsul Islam Khan and KCCI Managing Committee Members along with Chief Commissioners of FBR were also present on the occasion.

Member IR stated that FBR receives thousands of budgetary proposals every year but they hardly get time to read them because of limited time available hence, the Karachi Chamber and all other Chambers should immediately take their budget proposals to the Technical Committee formed by Finance Minister, get them refined and after due diligence, only doable recommendations should be forwarded to FBR. “I give you my word that we will try to implement maximum number of doable recommendations”, he assured.

He further informed that as per figure issued by the State Bank of Pakistan, the offtake of working capital has come down which was due to improved performance of FASTER in quickly processing the sales tax refund claims. “We are competing with State Bank in a positive contestation. We give you refunds and you don’t have to go to banks for borrowing working capital which jacks up the cost”, he added.

He said that FASTER was running with zero balance at an average speed of 40 to 50 hours for a refund claim to be processed. It was working with 95.5 percent efficiency which indicates that the Sales Tax Refund System was very good. However, the old refund claims remain stuck but instructions have been issued in this regard and the taxpayers should make a request to field formations to get their old claims processed which will be done on priority through FASTER system. Meanwhile, the Refund Grievance Committees in different cities also review and resolve the old refund claims in consultation with the business community at local level which are also released on priority, he added.

Referring to the cases of tax litigations, he said that tons of revenue remain blocked but if the FBR succeeds in recovering 20 percent of amount stuck up in litigation, the revenue targets will be achieved and the country will not have to go to the IMF to request for a cut.

Speaking on the occasion, Chairman BMG Zubair Motiwala pointed out that instead of receiving thick volumes of budget proposals from KCCI and other chambers of the country which were not being taken into consideration, FBR should this year disclose its priorities, what changes it wants and what will be focused in the budget so that KCCI and other trade associations could accordingly forward precise proposals only for inclusion in next year’s budget.

Appreciating the performance of FASTER Sales Tax Refund System, Chairman BMG stressed that it was time to focus on smaller cadre and the SMEs whose income tax refunds remain stuck because these small businesses were facing serious cashflow problems in the post COVID circumstances and they do not have access to banking channels. In this regard, the FBR should start by fixing some amount like Rs50,000 or Rs100,000 for settling income tax refund claims which would bring some relief in the lives of small businessmen.Terming CNIC condition as ‘syndrome’, he said that this issue has been roaming around since quite some time now and it was penalizing the registered persons for the acts done by unregistered persons which happen nowhere around the world.

He further stated that as many industries were closed during the past two to three years, the owners of such industries rented out their premises to make their bread and butter. Such premise was not rented out to a single individual or a corporate entity but to several smaller businessmen who prefer to stay unregistered by paying 25 percent over and above the electricity bill, 17 percent over and above gas bill and 17 percent on their raw materials which they purchase but they don’t want to get registered. “Now, the FBR officials were threatening to raid and seal such premises, which would create problems for the owner of the premises. It was highly unfair to penalize a person who already lost his industry and was surviving on the rental income. This is a very serious issues that needs to be taken care of”, he added.

He also underscored the need to restore the fixed tax regime or zero-rating system as no matter what the FASTER system has been doing, funds of around Rs70 billion for four and five months would remain blocked even in the ideal circumstances hence, the relevant businesses have to be provided support by restoring the zero-rating system.
Criticizing huge number of audit notices being sent by the FBR, he stated that number of audit notices sent during the last three years would exceed the number of audit notices issued during the last 20 years which clearly indicates the atmosphere of harassment. The government has to provide an enabling atmosphere so that the business community could concentrate on its manufacturing and explore new markets.

Vice Chairman BMG Anjum Nisar stated that it was a matter of grave concern that out of a total of 2.5 million taxpayers, only 3,000 taxpayers were paying 70 percent of the country’s overall taxes therefore the tax basket has to be enhanced to minimize the burden on existing taxpayers. “Taxpayers have been receiving dozens of audit notices which was a futile exercise as no major recovery comes out of such audits. FBR should start a profiling system in which profiles of honest taxpayers, who have been sincerely fulfilling the national obligation of paying taxes since many years, should be maintained and these taxpayers should not be harassed by sending notices”, he added.

Earlier, President KCCI Shariq Vohra, while welcoming Member IR, suggested that billions of rupees remain stuck up since last so many years due to litigations and the recovery seems to be unlikely whereas these litigations put the taxpayers in a state of torture and were also a burden on FBR’s resources therefore the tax-collecting authority will have to come up with some kind of incentive scheme in which the taxpayers in litigation should be provided the option to pay around 25 to 30 percent more tax than their usual tax for the year which would settle all their previous tax issues being contested in the litigation since last 5, 10 and even 15 years.

He further recommended that to bring new individuals into the tax net, a permanent desk should be established at the FBR which must have close coordination with KCCI and all other credible Chambers of the country to hunt new taxpayers but this hunting should be based on cordial relations. “We will help the FBR in identifying the hundreds of untaxed sectors where trade of up to billions of rupees was going on but no tax was being paid. FBR has to divert its machinery towards such sectors while the frequent audits have to be minimized as such audits were not resulting in much recovery but were a waste of time not only for the taxpayers but also for the FBR”, he added.

January 15, 2021 (MLN): Cement exports during the month of December 2020 declined by 8.58% YoY to USD 19.253 million from USD 21 million in Dec’19 due to closure of ports and lower trade activity on the Pak-Afghan border as well as lower demand from international buyers given the pandemic situation.

However, on monthly basis, the exports of cement increased by 6.2%MoM from USD 18.129 million recorded in the previous month.

Hong Kong rounds out worst year since 2011 with gains

Exports of Pharma products and Surgical goods surge by 27% and...