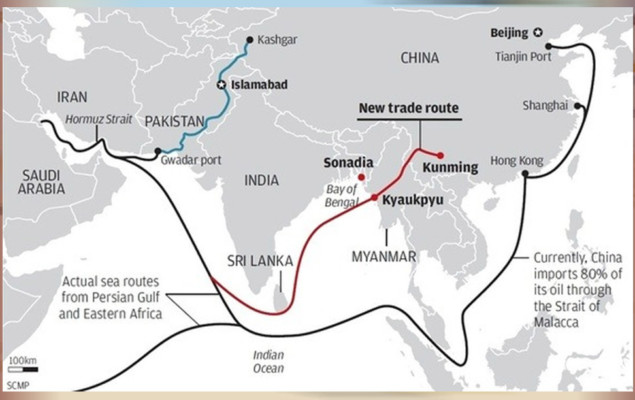 The China-proposed Belt and Road Initiative is vital for the future development of the world, especially for small developing nations, a Fijian expert said on Saturday.

“BRI (Belt and Road Initiative) is not just initiative, it is going to be a future or a way through which countries will find it necessary to engage with each other including the pacific island countries,” Keshmeer Makun, a lecturer at the Fiji National University's School of Economics, said in an interview with Xinhua.

“This initiative is very important for the future development of the world, especially for the small developing nations that are remote and lack in their social and economic development, looking for avenues and support to link themselves to the rest of the world and I think BRI in this regards is timely,” he said.

Proposed by China in 2013, the Belt and Road Initiative refers to the Silk Road Economic Belt and the 21st Century Maritime Silk Road, aiming at building a trade and infrastructure network connecting Asia with Europe and Africa along the ancient trade routes of the Silk Road.

“I think in another five or 10 years' time, BRI will not only be an idea or initiative itself, but also it is going to be a culture or means through which countries ought to engage with each other in a mutually beneficial way,” said the expert.

Makun believes that the Belt and Road Initiative has provided many opportunities for and benefited the world, including South Pacific island small countries like Fiji.

Pacific island countries including Fiji identified as developing economies need investment in infrastructure and new opportunities for international trade, he said, adding that they have tangibly benefited from the Belt and Road Initiative in recent years.

Makun mentioned that some of the recent projects undertaken by China in Fiji includes Suva's Stinson Parade Bridge and Vatuwaqa Bridge, and the Nabouwalu-Dreketi highway in Fiji's northern island of Vanua Levu, among many other projects.

Education and training, particularly in skill developing required for various Belt and Road Initiative projects would also be an opportunity for pacific island universities and institutions, he said.

Likewise locals from the Pacific can go for training and education in China in various areas where there is need, he said, adding that the South Pacific island nations can partner with China through the initiative to help improve ICT systems in the island nations and cope with the climate change issue.

As for some baseless accusations made by some Western countries towards the Belt and Road Initiative, Makun said that such accusation is “unfortunate and useless.”

The accusations are “not going to do any good particularly to the Pacific island nations. I think it will be wise and in the Pacific interest if these countries can work together with China through BRI to develop the region,” said the expert.

“The development projects, opportunities to further pacific trade relations to new markets and other assistants through BRI will further enhance the relationship between China and the Pacific island nations,” Makun said.

July 12, 2020: The Union of Small and Medium Enterprises invited the attention of the Prime Minister (PM) Imran Khan to the delay in the announcement of the SME policy 2020 which is ready but in doldrums for reasons best known to the ministry of industries.

President UNISAME Zulfikar Thaver said as a member of the advisory committee of the SME policy he witnessed the enthusiasm and passion of all stakeholders but now he is witnessing the frustration because of the delay which also means delayed implementation as well. UNISAME has urged the PM to announce the SME policy forthwith and also the board of directors of the Small and Medium Enterprises Development Authority (SMEDA).

Thaver said the idea was to replace the SME policy 2007 with an updated version encompassing all aspects of SME promotion and development. The simplest and not expensive way was to revalidate the old policy with few modifications wherever required.

However, he regretted that the policymakers could not comprehend the simple fact that the parameters of the SME definition needed to be widened rather than narrowed.

The valid argument of UNISAME representing the sector was the depreciation of the rupee and this was well supported by the State Bank of Pakistan (SBP).

The actual factual position is that by narrowing the definition of SMEs, the dynamic upper-medium sector will be excluded and will not fit in the definition.

It is pertinent to note that currently, it is this upper-medium sector which is most vibrant and has the resources to set up new import substitution industries. The small and medium are badly affected by the pandemic and the big sector is shy, it is waiting for the economy to get into gear and recover as against the upper-medium is inclined and ready.

The argument which the government experts are giving is that the upper mediùm sector will enjoy the tax benefits as well which are for the SMEs. This matter can easily be resolved by placing a ceiling of assets, turnover or employment strength for the purpose of tax benefits, and for all other purposes, the upper-medium could be defined as SMEs. One thing is clear that they cannot be labeled as large so obviously they come under SMEs. The last definition of SMEs was those whose employment strength was 250,  turnover was up to 800 million and productive assets up to 100 million. Considering the depreciation of the rupee it calls for broadening of the definition and narrowing it amounts to being irrational.

Leaving the definition what is most harmful is the delay in the announcement and implementation of the SME policy which is expected to make life easy for SMEs in many ways such as cost of doing business, ease of doing business, transfer of technology, marketing, and financial support for the sector and other facilities, support, encouragement and motivation much needed for the sector.

Thaver said in view of the importance of the SME policy the SMEs, SBP, SMEDA and all stakeholders are looking forward to the SME policy.

July 12, 2020 (MLN): The State Bank of Pakistan (SBP) has imposed monetary penalty worth Rs 1.684 billion on fifteen banks that violated SBP’s rules and regulations during March-June 2020.

According to a notice issued by SBP, the penalty was imposed mainly on violations in the area of CDD/KYC/CFT, Asset Quality, FX Operations and Corporate Governance.

Among the banks, the highest penalty of Rs 286.33 million was imposed on Bank of Punjab (BOP). In addition to penal action, the bank has been advised to strengthen its process related to KYC/CDD, Asset Quality, FX Operations and Corporate Governance in order to avoid recurrence of such violations in future.

Another major bank, National Bank of Pakistan (NBP), was fined Rs 269.81 million for the same offense.

Hefty fines of Rs 204.217 million and Rs 158.474 million were imposed on Habib Bank Limited (HBL) and MCB Bank Limited (MCB) for procedural violations in the area of CDD/KYC.

Zarai Taraqiati Bank Limited (ZTBL) was the fifth in terms of penalty with Rs 147.25 million on account of violations in the area of AML/CFT. In addition to penal action, the bank has been advised to conduct an internal inquiry on breaches of regulatory instructions and take disciplinary action against the delinquent officials.

July 12, 2020 (MLN): The highlight of the departed week was the exports number as per which Pakistan left India, Bangladesh behind. Advisor for Commerce, Textile, Industry and Production, and Investment of Pakistan, Abdul Razak Dawood has appreciated exporters for showing good performance during the Fiscal Year 2019-2020 as compared to the regional counterparts.

Apart from this, the other important economic and business events that took place during the last week are in order so as to become acquainted with the recent developments in Pakistan’s economic and public policy.

Taking cognizance of the negative fallout of COVID-19 Pandemic for the economy, SBP curtailed the end-user markup rates on Temporary Economic Refinance Facility (TERF) to 5% from the existing 7% and on Long Term Financing Facility (LTFF) for the non-textile sector to 5% from 6%. In addition to this, SBP also extended the availability of Deferment of Principal Amount of Loans facility till September 2020.

On equity front, The Organic Meat Company Limited (TOMC) closed its Book Building successfully. The company received total participation of Rs. 1,371,162,584 against an issue size of Rs. 720,000,000 at the floor price of Rs. 18 per share. The issue has been oversubscribed by 1.9x.

On the upside, German Fashion House Hugo Boss placed its first order of sportswear to a Pakistani company.

On energy front, Pakistan and China signed an agreement for the construction of the Azad Pattan Hydel Power Project. With an investment of 1.5 billion dollars and 700.7 megawatts of electricity, Azad Pattan will involve no fuel import, enabling the country to move towards cheaper and greener power while generating local job opportunities.

Moreover, US IDFC will provide financial support to Pakistan in PPP mode, as per statement issued from CEO of U.S. International Development Finance Corporation (IDFC), Mr. Adam Boehler, “the funds are available through both debt & equity to finance projects in Pakistan and for infrastructure projects in PPP mode.”

On the downside, the U.S. Department of Transportation said it has revoked permission for Pakistan International Airlines (PIA) to conduct charter flights to the United States, citing Federal Aviation Administration (FAA) concerns over Pakistani pilot certifications.

Lastly, the International Monetary Fund (IMF) in its recent report under the head of policy tracker which summarizes the key economic responses governments are taking to limit the human and economic impact of the COVID-19 pandemic, said that a gradual recovery in Pakistan is expected in FY 2021 as the economy reopens.

According to Arif Habib Limited, the market commenced on a positive note due to the flattening of the COVID-19 curve along with the higher recovery rate of patients. Moreover, an increase in SBP’s foreign exchange reserves, reduction in mark-up on Long Term Financing Facility and Temporary Economic Refinance Facility helped in boosting market sentiments.

Commercial Banks emerged as the best performing sector during the week, as it contributed about 494 points to the benchmark index, followed by sectors such as Cement, E&P, and Automobile, which combinedly contributed 427 points to the index.

Figures released by NCCPL showed that foreign investors dumped USD 9.45 million worth of stocks during the week with foreign corporates doing the bulk of the selling.

PKR, which had ended its 7-week run of depreciation against the dollar last week, resumed losing in value as the inflows received by the SBP failed to provide any reprieve to the struggling currency.

While the Rupee closed just 14 paisa or 0.09 percent lower it had depreciated by 75 pasia or 0.45% in the first two days of trading before recovering some of the losses in the remaining sessions of the week.

However, some solace can be taken from the fact that PKR has appreciated by Rs.1.70 or 1 percent since the start of FY21.

In the absence of any auctions, the yields in the secondary market displayed a mixed trend with 6-month yields decreasing by 6 basis points while 3 and 12-month yields came down by 17 bps.

There is an MTB and PIB (Floating Rate) auction scheduled for Wednesday, July 15, 2020.