HomeForexUpdate 2: PKR slides by over 1 rupee in intraday
Forex

July 05, 2022 (MLN): The Pakistani Rupee (PKR) has further depreciated by 1.19 rupees in intraday trade against the US dollar on Tuesday in an interbank when compared to the previous closing of 204.56.

In the last trading session, the domestic unit had appreciated by 28 paisa against the greenback.

Today in early trade, the rupee depreciated by 44 paisa [10:07 PST] due to news reports circulating on social media that the IMF program was being postponed or delayed due to some anti-corruption laws.

On such rumors and news reports, Federal Minister for Finance and Revenue, Miftah Ismail took to his Twitter handle and clarified that Extended Fund Facility (EFF) program with the International Monetary Fund (IMF) is on track. 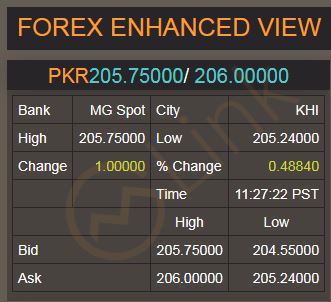