PKR snaps gaining streak, down by 44 paisa in early trade

July 05, 2022 (MLN): The Pakistani Rupee (PKR) snapped its winning streak, depreciating by 44 paisa in early trade against the US dollar on Tuesday in an interbank, due to news reports circulating on social media that the IMF program being postponed or delayed due to some anti-corruption laws.

On such rumors and news reports, Federal Minister for Finance and Revenue, Miftah Ismail took to his Twitter handle and clarified that Extended Fund Facility (EFF) program with the International Monetary Fund (IMF) is on track.

The minister said that there had been some tweets and stories about the IMF program being postponed or delayed due to some anti-corruption laws.

He said, there was no truth in this and the program was on track, he added.

To note, after the announcement of the Memorandum of Economic and Financial Policies (MEFP) received from IMF for the combined 7th and 8th reviews, the rupee started gains against the greenback in the interbank market. 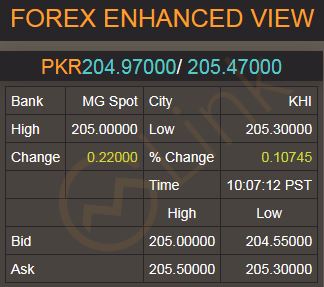