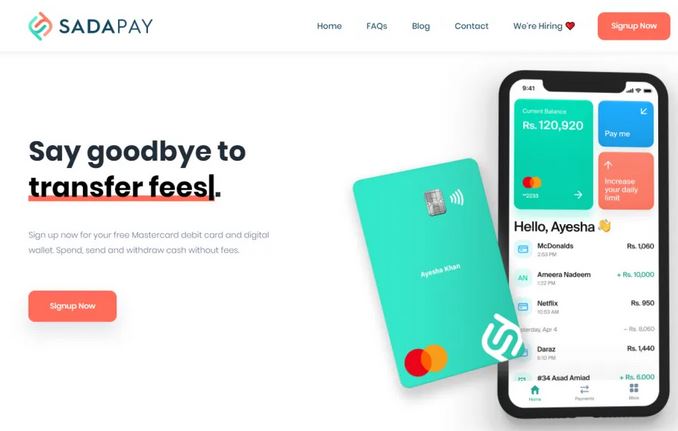 March 31, 2021: Fintech SadaPay has raised seed funding to digitize the banking industry in Pakistan. The new funding comes on the heels of accelerating consumer demand for SadaPay, whose waitlist is now crossing 200,000 registrations.

In January, the company launched its digital wallet and numberless debit card in its pilot phase under the supervision of the regulator. The fintech employs a “neobank” business model using the Electronic Money Institution license framework recently released by the State Bank of Pakistan. Since its inception in 2019, SadaPay has raised $9.3 million in funding.

Recharge Capital led the round with participation from existing investor Kingsway Capital, Jim Pallotta’s Raptor Group, and a roster of notable fintech angels, including Pierpaolo Barbieri (founder of Ualá), Brian McGrath (General Partner at Ribbit Capital), and Andrew Wang (founder of Valon Technologies). The company has also bolstered its management team with high-powered executives such as Jon Sheppard, a former CTO at Gojek (the Indonesian unicorn), and Tayseer Ali, former CFO of the bank behind Jazzcash (the largest mobile wallet in Pakistan).

Pakistan is the 5th most populous country in the world with over 220 million people, but it has the 3rd largest unbanked population after China and India. SadaPay’s CEO and founder, Brandon Timinsky, strongly believes the country is at an inflection point for digitization: “Pakistan has a refreshingly progressive regulator, a burgeoning unbanked middle class, widespread smartphone adoption, and over 70% of the population is under the age of 35. We believe that a combination of factors makes Pakistan one of the best places for emerging fintech in the world and we are excited to be a leader in that ecosystem.”

SadaPay plans to take advantage of the nearly one million smartphones coming online in Pakistan every month through its mobile app that allows users to sign up for a wallet account in under two minutes and immediately start using a SadaPay Virtual Mastercard. Because SadaPay is directly connected to Pakistan’s National Database & Registration Authority (NADRA), it can instantly verify any Pakistani’s identity from anywhere in the world – including the 15 million Pakistani expatriates living abroad.

Users are offered a free physical debit card that is shipped anywhere across the country in 2 business days and allows three free cash withdrawals per month at any ATM across Pakistan. SadaPay was the first to launch a numberless card in the Middle East & Africa region. This means the card numbers are only accessible securely in the app, instead of being printed on the card itself for anyone to copy.

SadaPay has also integrated with the local banking switch to facilitate free bank transfers. “Imagine the ease of use of Venmo or Cash App, but connected to the traditional banking system so you can seamlessly send bank transfers to anyone; even if they don’t have a SadaPay account”, explains Brandon. Account-holders also get their own IBAN numbers to facilitate international remittances from top providers such as Transferwise, Remitly, and Worldremit.

Since SadaPay does not bear the high costs of managing the physical infrastructure of traditional banks, it passes those savings to its customers in the form of free financial services. The company will generate revenues from premium product offerings such as merchant services and remittances.

Pakistan’s Central Bank is formalizing its own framework for a digital bank license, which SadaPay hopes to adopt in the near future. “Working with such forward-thinking regulators at the State Bank of Pakistan and collaborating with the Payment Systems Department has been a phenomenal experience,” Brandon remarked.

Proceeds from the round will enable SadaPay to scale its product offering and attract global talent to double its headcount to over 100 over the next 12 months. The company has offices in Islamabad, Karachi, and Lahore, with a growing number of remote hires in Europe and Asia.

FBR urges traders, taxpayers to use of electronic payment facility

Remittances increase by 5.21 Percent in First 4 Months of FY16