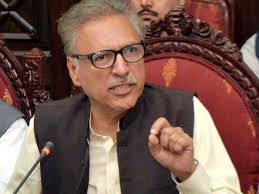 Dec 27, 2019: President Dr. Arif Alvi on Friday said Pakistan was endeavouring to further strengthen its existing bilateral engagements with the United Arab Emirates (UAE) at all levels and fields including trade, investment, energy, culture and tourism.

He was talking to UAE Minister of Tolerance Sheikh Nahyan Bin Mubarak Al Nahyan, who called on him here at the Aiwan-e-Sadr.

The President said that Pakistan and the UAE enjoyed close and cordial fraternal relations, based on solid foundations of a shared faith, culture and heritage.

He appreciated the efforts of the UAE for promoting regional peace and stability.

The President highlighted that 1.6 million Pakistani community formed a strong bridge between the two countries.

He said the nation took pride of what Pakistani Diaspora had contributed in the development of the UAE and stressed for more employment opportunities for Pakistani workers in the UAE.