Home Forex PKR sees massive fall, down by 6.4 rupees in a week

June 17, 2022 (MLN): Dismal macros along with no respite from the IMF side have further pushed the Pakistani rupee toward a colossal loss of 6.4 rupees in five consecutive sessions to settle the week at PKR 208.75, compared to the previous week’s was concluded at PKR 202.35 per USD.

Market experts are of the view that the situation needs the government’s immediate attention with respect to curtailing import bill through cutting unnecessary expenditures. Otherwise, in the absence of IMF tranche, Pakistan’s foreign exchange reserves will keep on depleting.

Speaking to Mettis Global, Malik Bostan, President of Forex Association of Pakistan said that only the green signal from the IMF will be able to stop the freefall of PKR. He also emphasized banning the imports of unnecessary/luxury items to prevent foreign exchange reserves to touch the deadliest level.

On the other hand, Zafar Paracha, President of Exchange Companies Association of Pakistan (ECAP) told Mettis, “No significant measure by the government to halt the continues drop in PKR indicates that currency depreciation may be a part of IMF agreement.”

He said that under the given circumstances, PKR should not be more than 190-192 per USD.

During the week, importers had to face difficulty opening LCs as foreign banks are demanding a 100 percent cash margin due to melting reserves.

“This is the reason behind intraday volatility as the demand for dollar during the intraday trade heightened up as importers have to deposit full amount within a day. Resultantly, the spread margin on US dollar across banks have increased to 2-3 rupees from 20-30 paisa,” Malik Bostan said.

Meanwhile, the trade deficit increased by 58% to $43.4bn during 11MFY22 mainly on the back of a historic surge in oil import bill. 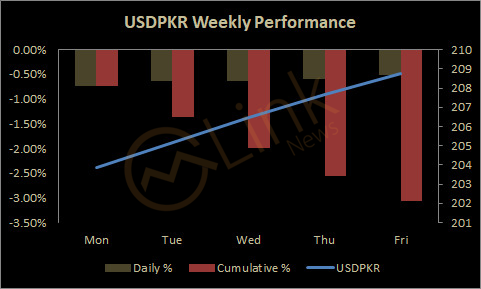 The currency lost 5.2 rupees to the Pound Sterling as the day's closing quote stood at PKR 256.76 per GBP, while the previous session closed at PKR 251.52 per GBP.

Similarly, PKR's value weakened by 3.6 rupees against EUR which closed at PKR 219.58 at the interbank today.

On another note, within the money market, the State Bank of Pakistan (SBP) on Friday injected Rs868.9 billion through reverse repo purchase and Shariah-compliant mudarabah-based Open Market Operation (OMO).

PKR appreciates by around one rupee in early trade on Chinese $2.3bn inflow

PKR registers modest gains, up by 1.3 rupees in a week

PKR joins downward trail, drops by over one rupee in intraday

June 27, 2022 (MLN): In order to facilitate taxpayers in payment of duty and taxes, the State Bank of Pakistan (SBP) has decided that the field offices of SBP Banking Services Corporation (SBP-BSC) and authorized branches of the National Bank of Pakistan will observe extended banking hours till 08:00 PM and 12:00 AM on 29th and 30th June, 2022 respectively.

The central bank in a statement issued on Monday said, “In order to facilitate the collection of Government receipts/duties/taxes, it has been decided that the field offices of SBP Banking Services Corporation and authorized branches of National Bank of Pakistan will observe extended banking hours till 08:00 PM and 12:00 AM on 29th and 30th June, 2022 respectively.”

Accordingly, NIFT has been advised to arrange a special clearing at 12:00 AM on 30th June, 2022 for same-day clearing of payment instruments.

June 27, 2022 (MLN): Pakistan has signed an agreement with France to get a suspension of loans worth $107 million under the G-20 Debt Service Suspension Initiative (DSSI) framework, a press release said today.