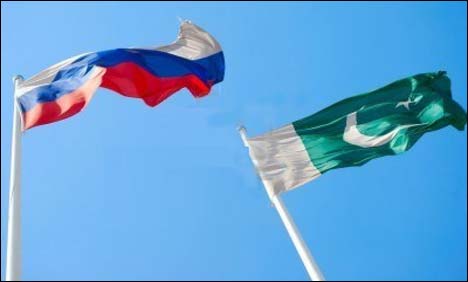 Minister for Commerce and Textile, Pervaiz Malik, has expressed interest in further strengthening cooperation in all fields of mutual interest including trade, energy, defense, and culture.

The Minister is currently on a visit to Moscow held a meeting with Russian Minister for Industry and Trade, Denis Manturov on the sidelines of the Ministerial Meeting under Shanghai Coordination Organization (SCO).

The two Ministers expressed satisfaction at the upward trajectory of bilateral relations and expressed interest in further strengthening cooperation in all fields of mutual interest including trade, energy, defense and culture, says a statement received here from Moscow on Thursday.

They also agreed on making joint efforts to enhance trade and economic cooperation between the two countries.

On the occasion Pervaiz Malik extended invitation to Denis Manturov for a visit to Pakistan at his earliest convenience to which Mr. Denis responded positively and accepted the invitation.

Earlier, the Commerce Minister attend the 16th Meeting of Ministers of SCO member states responsible for foreign economic and foreign trade activity in Moscow from November 13 to 16.

He was accompanied by MNA Shaista Malik and two officials of the Ministry of Commerce.

The meeting was attended by Ministers of Commerce and Trade of the eight members of the SCO as well as Observers.

The Ministers deliberated on the topic of “Current situation and prospects for further development of multilateral trade, economic and investment cooperation in the region of SCO”.

In his Statement made at the meeting, the Minister highlighted that Pakistan will work proactively with fellow SCO-member states to realize the goals and objectives of this forum in keeping with the SCO Charter and the ‘Shanghai Spirit’ of mutual trust, and shared development.

He said his country looked forward to advancing the overarching goals of SCO to strengthen political, economic and trade relations between the member states and promoting regional peace, security and stability.

Pakistan is partnering in a number of key regional energy and infrastructure initiatives including Turkmenistan-Afghanistan-Pakistan-India (TAPI) and CASA-1000.

He said Pakistan, China, Kazakhstan and Kyrgyzstan have agreed to initiate a bus service that would not only enhance trade but also be an important tool to promote people-to-people contacts among the four countries.

Pervaiz Malik said in line with the government’s vision of shared prosperity through connectivity, Pakistan has undertaken several initiatives which include rebooting of Quadrilateral Traffic in Transit Agreement (QTTA ) among China, Kyrgyz Republic, Kazakhstan and Pakistan, which is also being joined by Tajikistan.

He said the QTTA serves as a channel to regional connectivity and would become even more effective with Pakistan’s membership of SCO.

The Government of Pakistan, he said is working on domestic reforms that would help in promoting regional trade and connectivity.

The initiatives include establishment of the National Single Window to expedite trade clearance, aggressive implementation of Trade Facilitation Agreement and tariff rationalization to improve further our competitiveness and reduce the cost of doing business, he added.

The Minister expressed support for a regional Free Trade Agreement under SCO with a view to opening up partnership opportunities for the whole region.

He underscored that a trade led growth in the region would play a key role in bringing economic prosperity, employment and sustainable development.