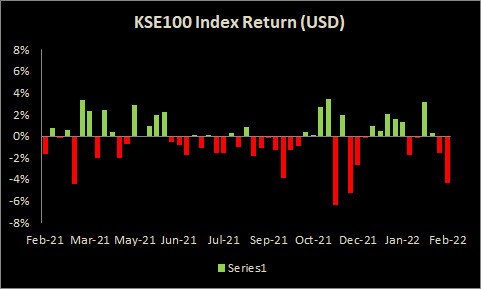 February 27, 2022 (MLN): A turbulent week at PSX ended with a loss of 1,692 points or 3.7%, WoW to settle at 43,984 level as tensions between Russia and Ukraine weighed heavily on investors’ sentiment with oil prices continuing their rally to surge above $100/bbl.

Other concerns such as the FATF’s decision together with a selling spree during the ongoing roll-over week, also kept the index under pressure. Moreover, the announcement of incentives worth PKR 1bn for the IT sector triggered buying mid-week, albeit, the positive momentum could not sustain for long as the market plummeted over the noise of Russia’s military attack on Ukraine, a report by Arif Habib Securities said.

In terms of USD, the index declined by a notable 4.38% from last week.

From the sector-specific lens, technology, commercial banks, cement, oil & gas exploration, and fertilizer kept the index in red territory as they snatched 342, 242, 222, 146, and 112 points from the index respectively.

Contrary to that, automobile, real estate investment, tobacco, and closed-end mutual fund during the week collectively added 38 points to the bourse

Scrip-wise, TRG, LUCK, SYS, HBL, and PPL were the worst-performing stocks during the week as they eroded 618 points from the index, whereas UBL, MTL, HMB, DCR, and PAKT added 103 points to the index.

Meanwhile, the KSE All Share market cap decreased by Rs259.3 billion or 3.3% over the week, being recorded at Rs7.5 trillion as compared to a market cap of Rs7.79tr recorded last week.

Flow-wise, foreigners were the net sellers during the week, offloading stocks worth $3.2mn compared to a net sale of $1.97mn last week, largely backed by foreign corporations amounting to $4mn. Major selling was witnessed in cement ($2.1mn) and technology ($1.7mn).

On the local side, the majority of the buying was reported by companies, individuals, banks, and insurance companies amounting to $9.5mn, $4.3mn, $4mn, and $1.9smn respectively. However, mutual funds and organizations stood on the other side with net selling of $15.2mn and $1.2mn respectively.