June 29, 2022 (MLN): From a fluffy cloud on the horizon to dark clouds hovering above our heads, inflation has turned into a perfect storm, exacerbated by the removal of energy subsidies amid soaring oil prices. While, in this inflationary environment, rising prices have inexorably been shrinking the real purchasing power of Pakistanis, hitting the poorer the hardest.

Steve H. Hanke, Economist and professor at Johns Hopkins University said on Twitter that Pakistan’s inflation is standing at a stunning 43% per year. 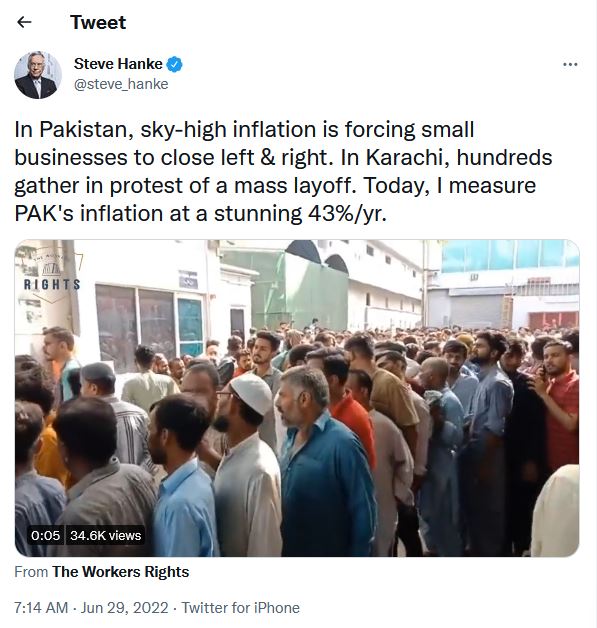 While the monthly outlook of June 2022 by the Finance Ministry estimated that annual inflation is expected to accelerate in June and may hover around 14.5-15.5%. Withdrawal of subsidies to control the mounting twin deficit will be the main reason for this acceleration.

Further, the recent rise in international commodity prices especially energy and food will also be translated into domestic prices, the ministry noted.

Going by the projections put forth by various brokerage houses, the CPI, on a sequential basis, is expected to escalate with an average estimate of 4.19% MoM compared to the increase of 0.4% MoM in May 2022. This is due to fuel inflation and its impact on the food index which has been making headlines since the removal of energy subsidies in subservience to the IMF in resuming the stalled programme.

The massive rise in fuel prices due to higher international oil prices and the end of subsidies by the government would drive the CPI during the month, reflecting in the transportation index as the average petrol and diesel prices increased by 39% MoM and 48% MoM respectively.

Other than the energy inflation, which is likely to rise by 23% MoM, the food inflation would be the biggest driver of headline inflation as prices of both perishable and non-perishable food items show a major increase. The biggest jump would be seen in prices of potatoes, eggs, pulses, ghee, cooking and oil amid higher palm oil prices and the currency depreciation, up by 15%-35%.

With the risk tilted to the upside on the back of currency depreciation and rising fuel prices from levies and taxes as the government brings budgetary changes, the fiscal year 2022-23 is expected to be a difficult year as headline inflation may settle in between 15-20%, the market expects.

In FY22, the central bank increased the policy rate by 675 basis points but the real interest rate is still hovering in the negative territory at 5.1%.

In the latest Bloomberg report, the country would probably have to increase fuel prices along with the policy rate by 50 bps in the next quarter before it receives IMF cash.