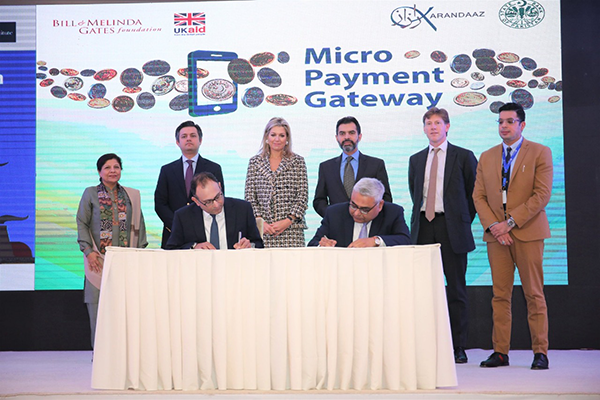 It takes not more than one glance at a few headline numbers to know the state of financial inclusion in Pakistan. Even the official estimates put the percentage of financially excluded population at 53%, meaning well over 100 million citizens who are on the margins of even the most basic services.

A number of remedies have been proposed to correct this course, of which leveraging technology has largely come up as the frontrunner. Be it the SBP, the Securities and Exchange Commission of Pakistan or the federal government, all are betting on tech to finally bring the country’s masses into the net of formality.

To this end, the central bank’s much touted Raast payment gateway was unveiled a few days back in partnership with Karandaaz and financial support from Bill and Melinda Gates Foundation. It’s being likened to India’s United Payments Interface, a sort of rails for the financial system on which existing and new solutions can integrate with and provide their services.

Powering this brand new gateway is Karandaaz Pakistan, a non-profit organisation founded in 2014 with the objective to boost financial inclusion by promoting access to finance for micro, small and medium enterprises through its investment platform. It is also making efforts to bring more individuals into the formal sector through use of digital channels.

MG recently interviewed the CEO of Karandaaz, Ali Sarfraz Hussain – a civil servant-turned financial inclusion evangelist – to discuss the Raast gateway, SME financing and women empowerment among other things. Below are the edited excerpts.

How would you explain Raast to a layman?

ASH: It’s a payment system which connects all the banks, non-banks, billers etc and enables them to make transactions from one account to another. In layman terms, say you have a mobile phone with Jazz’s connection while I own a Ufone SIM card, so if we need to call each other, there needs to be a centralised system which should connect us.

Similarly, in the financial services, you need a centralised system that allows one account the capability to talk with another, that’s the first one function. Secondly, the world over, it allows for real-time settlements instead of day-end which lets banks manage their cash much better. Third, international payments systems usually connect with an existing centralised system and then provide account services. Since Raast is an API-based system, it easily allows them to integrate, eliminating hardware or infrastructural expenses and while we were building it, there was interest on their part to enter the Pakistani market.

We are also integrating non-bank entities such as the Central Depository Company, with the Accountant General of Pakistan being the next in line, which is responsible for salary and pension disbursements of government employees. Instead of first dispatching them to the National Bank then to the respective banks before finally reaching the customers’ accounts. Through this system, AGP would be able to directly transfer money into the accounts of the government employees and the pension holders.

In Pakistan you can currently transfer money from one account to another what’s called IBFT, which is operated by 1LINK. In order to perform that, one needs the bank, account number etc in the exact order of the sendee. Raast instead will have a directory function, directly linked with, say, your phone number and you can send money just by entering those details. That will allow lots of people to make digital payments, which presently are held back because the existing process is very cumbersome. Finally, it’d be a low-cost system with a very high capacity of processing volumes.

What’s the primary difference with the existing RTGS i.e. PRISM?

ASH: PRISM is meant for large value and low volume transactions with only the banks and few very big corporates on board and its focus is on maintaining the stability of the financial system. Meanwhile, Raast is meant for financial inclusion – which would be low values and large volumes.

How many institutions are currently integrated with Raast and what’s the timeline you are looking at?

ASH: 12 banks are already connected with our system and hoping to get more than 20 by June.

You mentioned that it’s a switch system, so how would it differentiate from the existing option, 1LINK?

ASH: First of all, it’s an API-based system then there is a directory function as well. Most importantly, Raast also has the ability to connect with switches in other countries/regions. Just imagine the possibility of integrating with a recently launched GCC-wide switch and how that’d allow Pakistanis in Saudi Arabia to send their families back home money online. Obviously there are lots of regulatory matters that need to be resolved and it depends if the SBP wants to take that route but what I am saying is this system provides that technical functionality.

What is your organization currently doing to promote financial inclusion for women?

ASH: We have a program by the name of Women Ventures which funds female majority-owned businesses and invests up to Rs35 million. There are already 18 companies in our portfolio that’s worth Rs350m and we plan to bring to Rs500m by June.

While microfinance banks have grown over the years, the interest rates are still exorbitant. What is Karandaaz doing to bring them down?

ASH: Let’s first understand the breakdown of that interest; to begin with, there is the cost of capital MFBs incur which is roughly KIBOR plus 2pps; then are the operational overheads, which are quite a lot given the high volumes and low value; and finally, this is a high-risk segment so the rate has to priced for risk as well.

Now to help solve the first problem, we have our entity Pakistan Microfinance Investment Company. As far as reducing the operational costs is concerned, it can be done through digitisation and we are encouraging partnerships with existing or up and coming solutions. Lastly, the risk element is being overcome through guarantees. All these three combined should bring down the interest rates.

Most of the SME financing goes towards working capital needs, do you think a shift towards fixed investments is in order?

ASH: Currently there is an asset-liability mismatch, which means SMEs borrow for short term but use that for capital investments. As a result, they get payments before the asset is able to give cash flows. So while the numbers show that the demand is for working capital, the usage of funds is of an entirely different structure. Sometimes, even banks push working capital loans when the requirement is of a longer maturity.

The SMEs should get longer-term loans for asset formation; they would still need working capital but its percentage needs to decrease while the tenor has to increase.

There is another aspect to it, SMEs themselves often go shorter-tenor working capital financing for longer-term projects because it’s priced lower. Unfortunately they don’t take into account the time value of money and this is an area we need to educate them on.

Offering EVs and hybrids the same incentives would be detrimental: Master Motors CEO

Learnings from Covid-19 will help speed up initiatives: NCCPL CEO

Fertilizer offtake increases by nearly 145% YoY in January owing to...

ARY Network gets 90 days extension for making PAO to acquire...