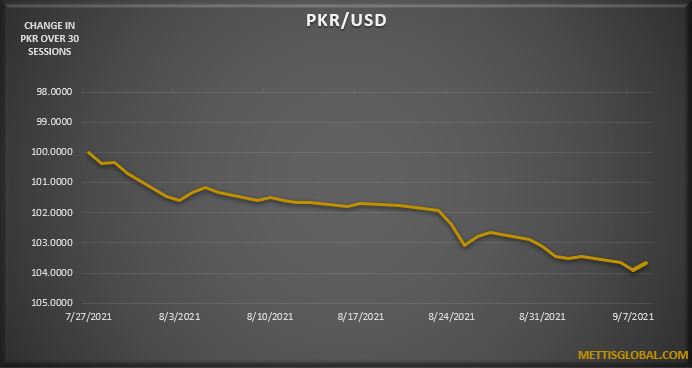 September 8, 2021 (MLN): Continuing the seesaw pattern, the Pakistani rupee (PKR) managed to gain 38 paisa against the greenback in today's interbank session as the currency closed the day's trade at PKR 167.25.

Though the rupee held some ground today in the open market, it is still under the mounting pressure of unfavorable macros and Afghanistan's situation.

Asad Rizvi, the Former Treasury Head at Chase Manhattan said, US Dollar is gradually inching up. The question is that what can stop the ongoing one-sided rally to arrest the rupee fall.

“Financial market in Afghanistan is still BRITTLE,” he added.

In a series of Tweets, he said that they need to look for over two years since PKR is market-based. Its volatility is much less.

People/investors need to mature as moving from fixed to the flexible (market-based) exchange rate. In the 1990s, the PKR movement was in chunks; in the 2000s, it was sticky with sudden significant adjustments.

“Now it is moving daily. Fundamentals and sentiments both play a role. Sentiments need maturity. That comes with time—no need to panic. As PKR from its value on Jul 19 is down by mere 3 percent today,” he added.

Highlighting the reasons behind PKR depreciation, he noted, “Import growth is beating forecast – no economic overheating – primarily due to rising commodity prices- these are mean-reverting, and so would PKR.”

In addition, uncertainty on the economic/political front is also accumulating pressure on PKR.

With regards to IMF, “wait till October- need to take actions on energy pricing. Energy pricing revision -gas and petroleum will curtail demand and would lower CD and fiscal deficit,” he noted.

Over FATF, “politics is swinging slowly in favor of Pakistan,” he anticipated.

He also underlined that the spillover effect of Afghanistan's ongoing situation and disturbing dollar demand could change with unfreezing Afghan's reserves, which depends on stability in Afghanistan.

While discussing the outlook of the local unit, he said that any change pertaining to Afghanistan and IMF would affect the sentiments. Exports will start looking forward, and importers will get slow – PKR is likely to appreciate by 2-3 percent in the short term.

While for the medium term, he noted, “work on building avenues for sustainable FE flows -exports, import-substitution, and FDI – for these, flexible exchange rate and independent monetary policy are imperative.”

Meanwhile, the currency gained 1.5 rupees against the Pound Sterling as the day's closing quote stood at PKR 230.1 per GBP, while the previous session closed at PKR 231.57 per GBP.

Similarly, PKR's value strengthened by 1.1 rupees against EUR which closed at PKR 197.81 at the interbank today.

On another note, within the money market, the overnight repo rate towards the close of the session was 7.10/7.20 percent, whereas the 1-week rate was 7.08/7.15 percent.

AGP Limited: On the up and up