Home Forex PKR depreciates by 1 rupee over the week 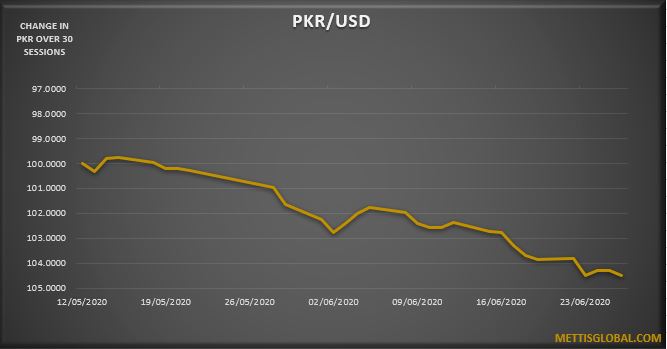 The rupee traded within a very narrow range of 55 paisa per USD showing an intraday high bid of 167.90 and an intraday Low offer of 167.50.

During the week, the currency has lost 1 rupee against the greenback, as the previous week was concluded at PKR 166.64 per USD.

Alternatively, the currency gained 20 paisa against the Pound Sterling as the day's closing quote stood at PKR 208.04 per GBP, while the previous session closed at PKR 208.24 per GBP.

Similarly, PKR's value strengthened by 6 paisa against EUR which closed at PKR 188.04 at the interbank today.

On another note, within the money market, the State Bank of Pakistan (SBP) conducted an Open Market Operation in which it injected Rs.925 billion for 7 days at 7.03 percent.

PKR weakens by 28 paisa against greenback

July 14, 2020 (MLN): As the Covid-19 pandemic created mayhem which has suffered all asset class and the equities have not been spared. However, on domestic front, a consistent reduction in the daily incremental cases of COVID-19 as well as its infection rate have helped to fuel sentiments at the local bourse.

This, in addition to several other key triggers have now made equities as a preferred asset class, a report by Arif Habib Limited highlighted.

According to the report, the government’s incentives package for the construction industry is likely to bode well for cyclical sectors such as cement and steel.

Moreover, economic recovery from incentives will revive the manufacturing sector through vast reduction in import duties as government is eyeing GDP growth at 2.1% for FY21 as compared to -0.4% in FY20. Besides, continuation of the IMF Extended Funding Facility (EFF) alongside several incentives announced in the FY21 budget to support local production should help market sentiment, the report added.

Furthermore, lower inflationary outlook for FY21 at 7.5% as compared to FY20 inflation of 10.8% will support consumer spending and economic activity.

The report further declared that significant gap between equity earnings yield and yields on the 10-year PIB could soon trigger market sentiment and help towards a re-rating as the average difference between the two has historically been approximately 1% as compared to 6% currently.

Additionally, with the cumulative 625 bps interest rate cut since Mar’20, equities are once again in the spotlight as a preferred asset class among investors, the report highlighted.

Likewise, the restriction imposed by the government on institutional investors to participate in National Savings Scheme after July 1, 2020 to redirect them to other parts of the financial sector should also bode well. Expected flow of funds from fixed income to equities should help trigger market performance, the report said.

This indicates that asset Management Companies and Insurance companies will likely mobilize funds from Fixed Income to Equities to generate healthy returns for their investors.

Thus, the inflows from all these domestic institutions and HNWIs will likely drive the market going forward with equities becoming highly attractive as an asset class, the report concluded.

July 14, 2020: The Turkish Airline has assured for reduction in freight charges & provision of excellent facilities to promote export of fruits & vegetables to Frankfurt, London and other Western International markets.

After a ban of six months on the national flag carrier for its flight operation to Europe, the export of fruits & vegetables faces a big problem. Keeping this problem in view, the commercial counselor of Pakistani Embassy in Istanbul, Bilal Khan Pasha had a meeting with the Chairman of Turkish Airline, ILKER AYCI and spoke about commencement of commercial flights of the Turkish Airline from Pakistan, particularly export of fruits & vegetables to the European Union.

During the meeting the Chairman of Turkish Airline extended assurance for commencement of flight operation from Pakistan and export of fruits & vegetables through the Airline to the European Union. In backdrop of this meeting, a delegation of exporters led by Waheed Ahmed the Patron-in-Chief of All Pakistan Fruit & Vegetable Exporters, Importers & Merchants Association (PFVA) had a meeting with the General Manager of Turkish Airline, Gurhan Sozen in Karachi. The delegation of PFVA consisted of Shehzad Warriach, Saeed Khan, Muhammad Zulifqar & Shaia Mateen.

Waheed stated that due to six months’ ban imposed on the national carrier by the European Union for its flight operation, Pakistani exporters have been deprived of privilege, the national carrier recently extended by reducing freight charges assisting the exporters in bringing down the cost of export shipments particularly mangoes & other fruits & vegetables and thus Pakistani exporters are now likely to be victimized by the foreign carriers due to their high freight charges! Comprehending problems of Pakistan exporters of fruits & vegetables due to the ban on the national carrier, Pakistani commercial counselor Bilal Khan Pasha had a meeting with the chairman of the Turkish Airline stressing the need for closer cooperation during this specific situation. Pakistan is a brother Islamic country of Turkey and the Turkish Airline has assured to extend full cooperation and support at the time when the national flag carrier is currently confronted with the challenging issue of acute shortage of manpower – Waheed , making it very difficult to export mangoes and other fruits & vegetables by Air to Europe, the sincere offer of cooperation & support by the Turkish Airline to facilitate export of this sector is commendable.

Meeting of the PFVA delegation with the General Manager of Turkish Airline in Pakistan, Gurhan Sozen to promote co-operation has been very fruitful. Pakistani exporters stressed the need for reduction in freight charges & provision of special handling facilities for perishable cargo i.e, export consignments of fruits & vegetables by the Turkish Airline so as to facilitate export of fruits & vegetables to Europe, UK & Canada. Pakistan & Turkey are tied up in a deep & strong relationship of Islamic culture & brotherhood and both the courtiers stood united during the difficult times by assisting and cooperating.

Economy of Pakistan is under immense pressure due to the global pandemic of coronavirus and this pressure can only be released by enhancing exports of the country. Cooperation from the Turkish Airline in this context to maintain exports and to attain the export target would be of great help. Pakistan strongly desires and is keen to export fruits & vegetables through the Turkish Airline on a long-term basis.

Taking advantage of this wonderful occasion, the General Manager Turkish Airline Gurhan Sozen assured for reduction in freight charges and provision of excellent ground handling facilities for the export shipment of fruits & vegetables. The GM requested that the PFVA shall provide him details of export volume so that space required for each export shipment can be well estimated and planned accordingly. The PFVA , at the earliest, would furnish details about export volume of mangoes & other fruits & vegetables shipments & space requirements to the Turkish Airline for Europe , UK , Canada & other countries so that with the support of the Turkish Airline , export of Pakistani fruits & vegetables to these export destinations can be maintained .

The delegation of PFVA also presented a gift of delicious Pakistani mangoes to the GM, Gurhan Sozen . According to Waheed Ahmed, the regional cargo head - South Asia of the Turkish Airline, Halit Tuncer has also assured cooperation & support for export of fruits & vegetables from Pakistan. The Director South Asia also shared that the Turkish Airline has already prepared a schedule of flights for Karachi, Lahore & Islamabad and it would be a pleasure to facilitate export of fruits & vegetables from Pakistan.

Waheed Ahmed appreciated extensive efforts of Pakistani commercial counselor Bilal Khan Pasha based in Istanbul for making grounds for cooperation by the Turkish Airline and initiation of a meeting with the high officials of the Airline in Pakistan with the delegation of PFVA. Bilal Khan is a glorying example of tireless efforts who is striving hard in provision of facilities to the Pakistani exporters besides further cementing economic ties between Turkey & Pakistan.

In the early hours, the market observed short spell of bull run, however, in later hours profit-taking witnessed as the corporate season is about to begin.

In the oil and gas sector, Pakistan Oilfields Limited (POL) saw an upward trend following an announcement of MOL regarding a gas and condensate discovery in Tal Block, Pakistan.

Of the 97 traded companies in the KSE100 Index, 52 closed up 40 closed down, while 5 remained unchanged. The total volume traded for the index was 323.24 million shares.

Sectors propping up the index were Oil & Gas Exploration Companies with 66 points, Inv. Banks / Inv. Cos. / Securities Cos. with 36 points, Fertilizer with 24 points, Miscellaneous with 11 points and Pharmaceuticals with 10 points.

The most points added to the index were by POL which contributed 44 points followed by DAWH with 31 points, PPL with 16 points, KEL with 15 points and SHFA with 11 points.

Sector-wise, the index was let down by Cement with 23 points, Oil & Gas Marketing Companies with 16 points, Technology & Communication with 10 points, Automobile Parts & Accessories with 6 points and Chemical with 3 points.

The most points taken off the index was by PSO which stripped the index of 18 points followed by LUCK with 11 points, HUBC with 10 points, BAFL with 9 points and DGKC with 8 points.

Total companies traded were 393 compared to 403 from the previous session. Of the scrips traded 214 closed up, 158 closed down while 21 remained unchanged.

According to the Karachi Sarafa Association, the price of 10-gram gold also witnessed a decrease of Rs 300 to settle at Rs 93,364 against Rs 93,664 on the last trading day.

July 14, 2020 (MLN): As part of its active engagement in the fight against COVID-19, Archroma, a global leader in color and specialty chemicals towards sustainable solutions, started bulk production of a new range of hand sanitizers at its Landhi site in Pakistan in May 2020.

The new Kieralon HS range was developed by the R&D team at the Archroma Center of Excellence in Karachi, in line with the World Health Organization (WHO) recommendations.

Sanitizers are currently in high demand in Pakistan in hospitals, isolation centers, medical institutes and other health care environments, due to the COVID-19 outbreak. The use of sanitizers has also been made mandatory in all factories, offices and public places, driving the demand even higher.

The Kieralon HS range is being produced in different grades and concentrations to eliminate a broad range of germs, bacteria and viruses, to cater for various healthcare and hygiene requirements. They also include emollients and display non-stick and quick drying effect, for skin comfort.

Archroma is also actively supporting manufacturers in the production of face masks and medical protective equipment. Its antimicrobial and barrier products in particular are in high demand, and Archroma is making every effort to assist existing and new customers entering this sector by providing technical know-how and support.

The company is supporting producers of packaging & paper who are facing high demand for food packaging as many restaurants have switched to delivery or take-away, as well as for parcels and boxes supporting online shopping.

Mujtaba Rahim, CEO of Archroma Pakistan comments, “Within Archroma we are cognizant of the acute community need for high quality hygiene products that are also comfortable for users, as hand sanitizers tend to be harsh on the skin, so we took on the challenge to develop and start production in record time. The Archroma team in Pakistan won’t rest in fighting the COVID-19 pandemic, and hopes this new product will help to stop the spread of the virus and the suffering that it causes.”

Asian stocks sink after losses in US, Europe