In addition, the government also obtained $2.5bn from international capital markets through the issuance of Eurobonds and $1bn from SAFE Authority as a deposit.

Around $4.802bn worth of agreements, which constituted 31% of the total new commitments were commercial borrowing. This financing was arranged to refinance maturing commercial debt.

Meanwhile, the Finance Division issued Eurobonds worth $2.5bn (16% of the total commitments) in the international capital market. An amount of $1bn (7%) has been arranged from China's SAFE authority to repay the deposit to a friendly country. 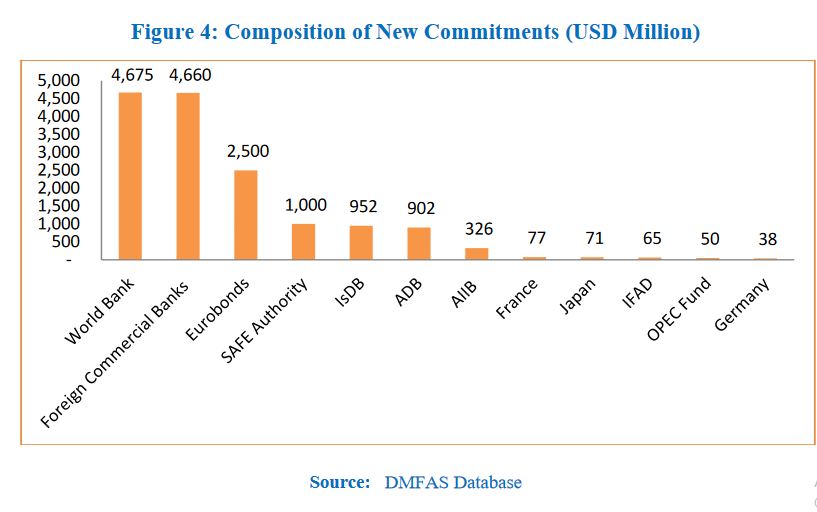 Going by the debt bulletin report, project financing is obtained for funding socio-economic and infrastructure development projects. While program financing is secured to support the wide-ranging economic reforms and balance of payments and is generally obtained from multilateral development partners such as ADB, World Bank, AIIB, etc. (on concessional terms and conditions with longer maturity).

The commodity financing is arranged for the procurement of crude oil mainly from the IDB. In addition, the government also raises funds from international financial institutions and capital markets to meet its immediate fiscal and liquidity requirements.

During the period, out of $15.32bn, an amount of $2.015bn (13% of the total commitments) was earmarked by multilateral development partners as program financing to broaden and deepen the financial system. An amount of $4.19bn (or 27% of the total) was allocated for project financing and $952mn (or 6% of the total) for commodity financing purposes.

With regards to project financing, the government is receiving financing for various sectors of the economy, ranging from energy/power to transport & communication; and from health & education to agriculture & rural development. The sectoral composition of the commitments reflects the priority development objectives of the government.

Energy & Power is the key priority of the government during the fiscal year 2020-21 with a total share of 35% out of total project financing. Rural Development and Social Welfare emerged as a second priority with a share of 23%, followed by Governance (18%).

The inflows from the multilateral and bilateral development partners are indicative of their commitment to support the development priorities of the government. These inflows are long-term and on concessional terms with a lower cost which is a reflection of the healthy composition and quality of external public debt.

As of 30th June 2021, Pakistan’s total external public debt stood at $85.6bn that was derived from three key sources. The major source is multilateral debt (comprising of 49% inclusive of IMF), followed by bilateral 25%, and foreign commercial banks 11% while the remaining 15% of debt consists of SAFE deposit and Eurobonds (inclusive of Sukuk). 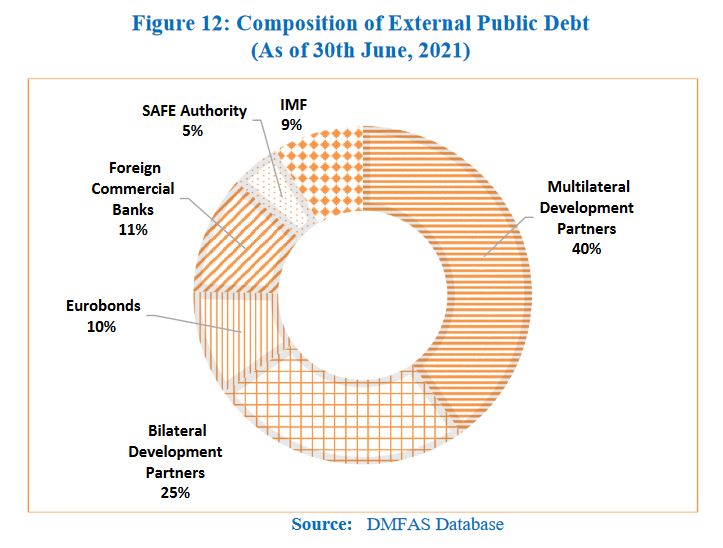 The report highlighted that 70% of total external public debt consisted of loans on fixed interest rates while 30% of loans are obtained on floating interest rates.

During July- June 2021, the debt bulletin disclosed that the government settled $8.39bn on account of debt servicing of external public loans. It consists of a principal payment of $6.94bn and an interest payment of $1.45bn.

For the period under review, net transfers to the government‘s external debt were $6.37bn, including $1bn received from the SAFE authority. The share of concessional external loans with longer maturity increased by $1.59bn (multilateral and bilateral and IMF loans) and the share of foreign commercial borrowing and Eurobonds have increased by $3.78bn. This indicates qualitative improvement in the external public debt stock, it added.

It is pertinent to mention here that due to the outbreak of the COVID-19 pandemic developing countries all over the world are hard-pressed to mobilize resources to meet urgent health and economic needs. The Prime Minister took the lead in pressing Heads of State, governments of developed countries and international financial institutions, to provide debt relief to developing countries during these challenging times, it underlined.

HBL’s half year profits decline by 52%

Cnergyico in final talks to acquire nearly 57% stake in Puma...