Home Economy Pakistan should not be bullied by US President, we as a nation... 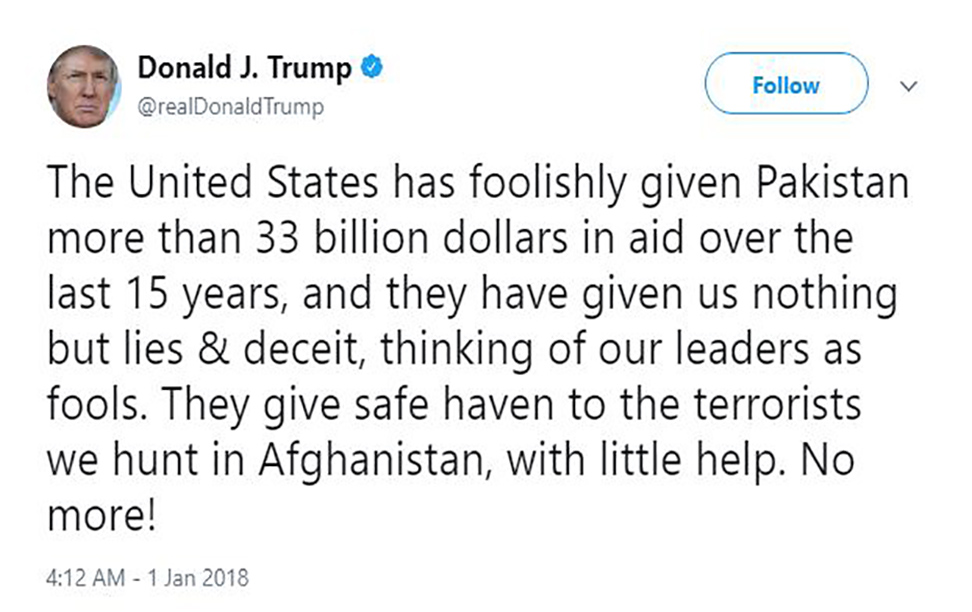 (MLN): Mr. Donald Trump and his tweet on the New Year has had Pakistan Officials and the general populace in a fit of anger. The New Year tweet was made with a sole purpose of humiliating Pakistan by calling out the entire country as lying and deceitful.

The habitually untruthful and bullying new President of the United States has not only broken the customs and conventions of the accepted International Law and Diplomacy practices, he has also berated them and made them inapt. The US President’s lack of grip on even the theoretical basics of International Relations has made him look foolish and stupid in the entire world, coupled by his illiterate mumbo jumbo. His lack of knowledge on matters pertinent to International Security, Diplomacy and Conventions has made the US President a laughing stock for the entire world.

To put the lying of the US President in perspective, recently a Washington Post Analysis wrote that during a 30 – minute interview, Mr. Donald Trump made 24 false and misleading claims all of which the newspaper fact checked. This is how he continues to operate, every day, since his presidency without any apology for his false claims and lies.

This presidency has exposed numerous fault lines in the US Electoral System and the real-politick method of Democracy. The extreme disregard to moral and ideological considerations by the US President will instill a damaging and an eternal damnation on the US and in turn on the entire world.

On January 1st, this megalomaniac President of the United States posted this on his twitter account, “The United States has foolishly given Pakistan more than 33 billion dollars in aid over the last 15 years, and they have given us nothing but lies & deceit, thinking of our leaders as fools. They give safe haven to the terrorists we hunt in Afghanistan, with little help. No more!”

A post-mortem of the tweet would help in understanding the psyche of the incumbent US President. First of all, CSF as defined by the Susan Epstein, Specialist in Foreign Policy goes something like this “Coalition Support Fund is Defense Department funding to reimburse Pakistan for logistical and operational support of U.S-led military operations; it is technically not foreign assistance.”

Secondly, as far as the claim of $33 billion dollars’ worth of aid is concerned which apparently Mr. Donald Trump thinks Pakistan has been given for their “lies and deceit” is actually the grand total of the “Direct Overt U.S. Aid Appropriations for and Military Reimbursements to Pakistan, FY 2002-FY 2018” which includes three main tiers: Security Related Reimbursements, Economic Related Reimbursements and Coalition Support Fund. The President, lest he remains ignorant forever, must be reminded that even the most conservative estimates put the cost of Pakistan’s partnership with the United States in Afghan War to more than $100 billion dollars.

Of the 33 billion dollars claimed by the US president, 14 billion dollars have been the reimbursement of funds has come as a payment against Pakistan’s provided service for US against her using of vehicles, Airports and other Utilities. Moreover, the country during the last 15 years of alliance has suffered colossal losses and economy has suffered jolts of more than 120 billion dollars where thousands of people in the country have laid their lives in order to secure US Interests in the region. No to mention the perception issues that have resulted from the war, which has put tarnished Pakistan’s reputation across the world.

Figures in Million US ($), link to original PDF here

Reimbursement, the word, according to Oxford Dictionary means to pay back. As the official US Document on the funds provided to Pakistan since the start of Afghan War explicitly states that, “CSF is ……. to “reimburse” Pakistan for logistical and operational support for U.S.-led military operations; it Is technically not foreign assistance.” Given his widely renowned Attention deficit hyperactivity disorder, it would be safe to assume that the US President just did not care to read the footnotes to the official documents.

In short, Pakistan should just ignore this clown of a President and pray that the US Election Officers realize their mistake and put in place at least a Grade – V level intelligence tests for any person nominating themselves for the seat of US President.