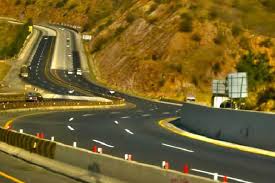 February 26, 2019: Thakot-Havelian Motorway, one of the early harvest projects of China Pakistan Economic Corridor (CPEC), is being built at fast pace and as per schedule, the project would be completed by end of February next year.

An official of National Highway Authority (NHA) on Tuesday said that so far 71 per cent physical progress of the project has been achieved.

The project has been funded by China Exim Bank up to 90 percent, while the remainder 10 percent is being funded by government of Pakistan, he said.

The motorway starts from Havelian passes through Abbottabad, Mansehra and Shinkiari, ending at Thakot. The motorway has five tunnels two at Abbottabad, and one each at Battal, Karmong and Mansehra.

Seven projects worth $1.44bn are under implementation process in Gwadar

All provinces to develop cluster of industries under CPEC: Ahsan Iqbal

APTMA urges govt to review its initiatives pertaining to industry