November 30, 2021 (MLN): It is too soon to incorporate the effects of the new Omicron coronavirus variant into global economic growth forecasts until more is known about its transmissibility and severity, Fitch Ratings said on Monday.

It is believed that another large, synchronized global downturn, such as that seen in 1H20, is highly unlikely but the rise in inflation will complicate macroeconomic responses if the new variant takes hold, the rating agency’s latest report noted.

The World Health Organization (WHO) designated Omicron a variant of concern on 26 November due to the number of mutations that can affect how it spreads and its health effects.

On 28 November, the WHO said it was not yet clear whether Omicron is more transmissible than other variants, including Delta. Although there is ‘currently no information to suggest’ Omicron’s symptoms are worse, understanding its severity ‘will take days to several weeks.

The possibility of a new variant that requires significant non-pharmaceutical interventions (NPIs), such as highly stringent nationwide lockdowns, to contain transmission is a continuing risk to the global economy. But the experience of most large countries suggests each successive wave of coronavirus infections has diminishing growth effects as economies adapt, for example, through changes in working and consumption patterns.

Moreover, vaccination programmes and improved scientific understanding of the virus reduced reliance on NPIs compared with the beginning of the pandemic. Meanwhile, the political bar to reintroducing full lockdowns has risen. These factors make a repeat of 1H20’s unprecedented global GDP contraction unlikely.

Nevertheless, the return to pre-pandemic levels of activity in the most exposed sectors, such as tourism and international travel, will be disrupted, and the shift back to services from goods consumption may also slow. Broader risks to growth have risen where restrictions on economic activity are likely to be more extensive, the report stated.

In this respect, the report highlighted that vaccination rates could be critical as evidence from Europe and the US shows vaccinations weaken the link between coronavirus infection and hospitalization rates. Higher vaccination rates could; therefore, reduce the risk that public health systems are overburdened, which would necessitate harsher NPIs. The WHO said it is ‘working with technical partners to understand the potential impact’ of Omicron on vaccine effectiveness. 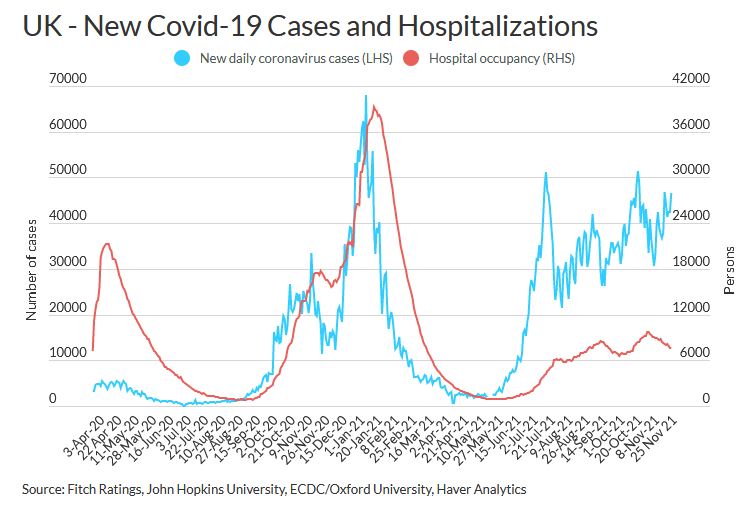 The scale of the policy support provided in response to the pandemic has limited supply-side scarring from the pandemic in developed markets, relative to Fitch’s initial expectations.

However, recent increases in inflation will complicate any policy response to Omicron, which could have an inflationary effect if new lockdowns or voluntary social distancing constrain labour supply recoveries or exacerbate global supply-chain shortages and bottlenecks. Hence, Fitch believes that the central banks could be wary of delaying the normalization of monetary policy settings in response.

January 17, 2022: Oil prices rose on Monday, with Brent crude futures at their highest in more than three years, as investors bet supply will remain tight amid restrained output by major producers with global demand unperturbed by the Omicron coronavirus variant.

The gains followed a rally last week when Brent rose 5.4% and WTI climbed 6.3%.

Frantic oil buying, driven by supply outages and signs the Omicron variant won't be as disruptive as feared for fuel demand, has pushed some crude grades to multi-year highs, suggesting the rally in Brent futures could be sustained a while longer, traders said.

"If (investment) funds increase allocation weight for crude, prices could reach their highs of 2014," he said.

The Organization of the Petroleum Exporting Countries (OPEC) and its allies - OPEC+ - are gradually relaxing output cuts implemented when demand collapsed in 2020.

But many smaller producers can't raise supply and others have been wary of pumping too much oil in case of renewed COVID-19 setbacks.

Worries of a Russian attack on neighbouring Ukraine that could disrupt energy supply also lent support to prices.

U.S. officials voiced fears on Friday that Russia was preparing to attack Ukraine if diplomacy failed. Russia, which has massed 100,000 troops on Ukraine's border, released pictures of its forces on the move.

U.S. crude oil stockpiles, meanwhile, fell more than expected to their lowest levels since October 2018, but gasoline inventories surged due to weak demand, the Energy Information Administration said on Wednesday.

Sources told Reuters China plans to release oil reserves around the Lunar New Year holidays between Jan. 31 and Feb. 6 as part of a plan coordinated by the United States with other major consumers to reduce global prices.

Unilever and GSK did not immediately respond to Reuters' requests for comment.

Unilever could eventually sell some non-core assets from the GSK portfolio to buyers including private equity firms, which could help fund an acquisition, the Bloomberg report added.

The benchmark palm oil contract for April delivery on the Bursa Malaysia Derivatives Exchange slid 35 ringgit, or 0.71%, to 4,921 ringgit ($1,175.87) a tonne during early trade, its lowest since Jan 5.

Bursa Malaysia will be closed on Tuesday for the Thaipusam festival.

* Exports from the world's second-largest palm oil producer during Jan. 1-15 fell between 32% and 45% from the same period in December, cargo surveyors said on Saturday.

* Dalian's most-active soyoil contract rose 0.1%, while its palm oil contract slipped 0.2%. The Chicago Board of Trade were closed for a public holiday.

A holiday in the United States made for thin trading, but that did not stop Treasury futures from sliding further and Brent crude hitting a three-year top of $86.71 a barrel.

Worryingly for the world's second-largest economy, retail sales rose only 1.7% year-on-year in December, missing forecasts for a 3.7% rise.

Industrial output did fare better and the economy as a whole grew little above forecasts at 4.0% in the fourth quarter.

"The cut was larger than expected, suggesting that the authorities have become more preoccupied about weakness in the economy," said Carlos Casanova, senior Asia economist at Union Bancaire Privee in Hong Kong.

"The latter (Omicron risks) will only start to be fully priced in the combined Jan-Feb data, as the most severe lockdowns started in late December."

The easing seemed to help China blue chips, which edged up 0.4% in the wake of the data.

The main feature of the market recently has been a rotation into value stocks and away from growth, particularly technology. The S&P 500 information technology sector, which accounts for nearly 29% of the index, has shed 5.5% this year.

With valuations still high, earnings will have to be strong to stop further losses. Overall S&P 500 earnings are expected to climb 23.1% this season, according to Refinitiv IBES, while the tech sector is seen up by 15.6%.

The market will be spared speeches from U.S. Federal Reserve officials this week ahead of their Jan. 25-26 policy meeting, but there have been more than enough hawkish comments to see the market almost fully price in the first-rate hike for March and rates of 1.0% by year-end.

There was also talk the Fed will start trimming its balance sheet earlier than previously thought, draining some of the excess liquidity from world markets.

Yields on cash 10-year Treasuries climbed to their highest in a year at 1.8% last week, while the implied yield on futures jumped to 1.86% on Monday.

A Bank of Japan (BOJ) policy meeting this week will bear watching the given talk it will revise up its outlook for growth and inflation, while sources told Reuters policy makers were debating how soon they could start telegraphing an eventual interest rate hike.

While a move is unlikely this year, financial markets may be underestimating its readiness to gradually phase out its once-radical stimulus programme.

This was one reason the yen rallied, with the dollar slipping 1.2% last week. On Monday the dollar had regained some ground to 114.45 yen still well above major chart support at 112.52. [FRX/]

"We continue to think that the greenback will strengthen again before long, as we expect strong cyclical price pressures in the U.S. to mean the Fed tightens by more and for longer than investors currently discount," argued Joseph Marlow, an economist at Capital Economics.

The risk of higher rates kept non-yielding gold restrained at $1,816 an ounce, while industrial and energy resources have benefited from resilient demand and limited supplies.

Oil prices have climbed for four weeks straight and such is demand that physical barrels of oil is changing hands at near-record high premiums.

January 17, 2022: China's central bank on Monday unexpectedly cut the borrowing costs of its medium-term loans for the first time since April 2020, while some market analysts expect more policy easing this year to cushion an economic slowdown, Reuters reported today.

The People's Bank of China (PBOC) said it was lowering the interest rate on 700 billion yuan ($110.19 billion) worth of one-year medium-term lending facility (MLF) loans to some financial institutions by 10 basis points to 2.85% from 2.95% in previous operations.

Thirty-four out of the 48 traders and analysts, or 70% of all participants, polled by Reuters last week predicted no change to the MLF rates in January, with the rest betting on a rate cut.

The world's second-largest economy has shown signs of slowing after a rapid rebound from the COVID-19 slump, with concerns about the financial health of property developers and the rapid spread of the Omicron coronavirus variant clouding the outlook.

"The PBOC's decision to ease early in January suggested that economic downward pressure intensified at end-2021 and room for improvements in the first quarter of this year is not huge," said Ken Cheung, chief Asian FX strategist at Mizuho Bank.

Cheung expects that the PBOC could deliver more easing measures this year than previously expected by market analysts.

Such expectations were also reflected in the bond market, with China's 10-year treasury futures rising to their highest level since June 2020 and the yield on China's benchmark 10-year government bonds falling more than 2 basis points in early trade.

Market analysts said the size of the rate cut and the timing were a big surprise, and they believe further monetary stimulus could follow.

"However, the 10-bps cut was larger than expected, suggesting that the authorities have become more preoccupied about weakness in the economy," he said, adding he also expects an additional 100 bps reduction to banks' reserve requirement ratio (RRR) this year.

With a 500-billion-yuan worth of MLF loans maturing on Monday, the operation resulted in a net injection of 200 billion yuans into the banking system.

The central bank also lowered the borrowing costs of seven-day reverse repurchase agreements, or repos, by the same margin to 2.10% from 2.20%, when it offered another 100-billion-yuan worth of reverse repos into the banking system. ($1 = 6.3524 Chinese yuan).

APAC Remittances to decline amid the Coronavirus shock: Fitch

Credit offtake by private sector stands at Rs1,138bn in 2021

Banks: Back in the limelight