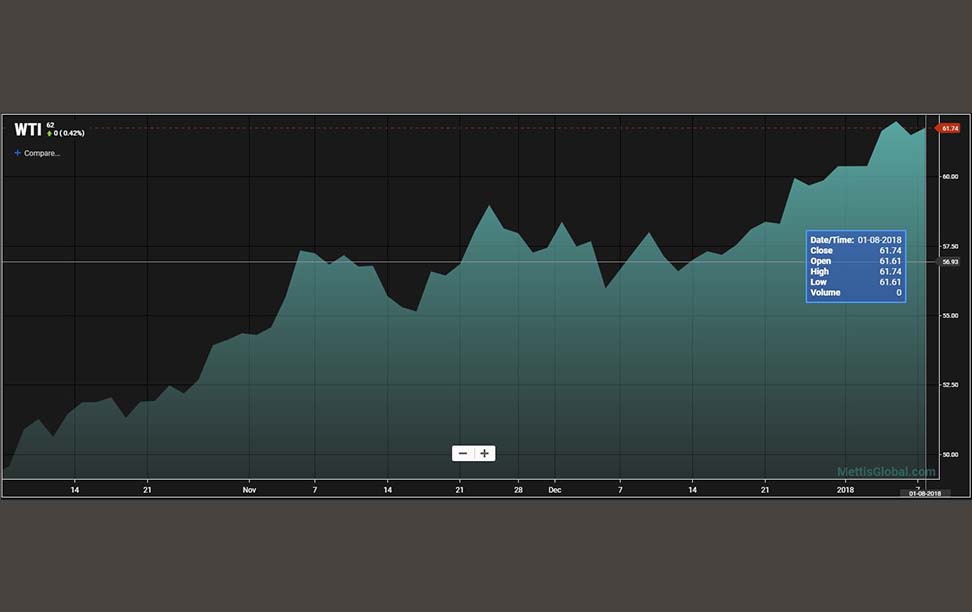 OPEC and Russia led cuts deal that has sent the prices to reach new highs may be in a danger. The deal during the year 2017 has been managed relatively better compared to the previous ones but the cartel and the other participants face many challenges in the year 2018.

The deal was extended during the last meet at the last OPEC meeting in Vienna, to stretch the deal till the end of year 2018.

The rising oil prices coupled with the increasing US production has had some participants eyeing to withdraw from the cuts deal and to take benefit. U.S. West Texas Intermediate (WTI) crude futures were at $62.13 a barrel at 0123 GMT – 40 cents, or 0.65 percent, above their last settlement.

The investors worry about the continuation of OPEC deal for four fronts: 1) Oil Production halting in Venezuela/Iran 2) OPEC Member Cheating 3) Deal serves the purpose and lastly 4) Rise in US Shale Production.

The Venezuelan Government has recently defaulted on its debt payments as the economy was based entirely upon the Oil Production Revenues, after the prices fell during the 2010 – 2014, the South American nation was brought down on its knees. Coupled with that, the Iranian situation which may yet hold the potential to trigger a complete halt in production would shift the dynamics altogether. As other members would eye to fill up the resulting gap from production shutdown in any of the two problem ridden countries.

It then comes down to the compliance from the OPEC nations, the OPEC Deal currently in progress has been a success because of its customization. The deals differ for each country based on her reserves and economic conditions. However, with the rising prices and US Production, these countries may falter and take advantage.

United States is soon to become only of the leading oil producers in the world third only to Russia and Saudi Arabia. The output is expected to cross 10 million bpd, matched only by Russia and Saudi Arabia. Investors are worried that the US production is rising too much and too fast, sparking fears that the US Production will grow. But if it grows too much, the Russia and other OPEC members will ditch the pact and start defending their market share.

Lastly, no one knows what prices OPEC finds suitable for it continue the cuts. And what would happen if prices do reach a given level and OPEC and other abandon the deal? The analysts have been worried that the cuts unless lifted by demand will have no long term impact on prices of Crude.

Ghani Global Glass all set to serve export and...

Aug 6, 2020 (MLN): As a part of the expansion plan, Ghani Global Glass has decided to set up another glass melting furnace for tube in view of growing demand for glass tubing, vials & ampoules and to meet forecasted export and local demands for COVID-19 vaccine.

It is worth highlighting that the production capacity of import substitute products will be 100% increased as a result of this expansion plan.

Yesterday, in the board meeting, the directors announced the approval of expansion plan and to raise certain funds through further issue of share capital.

In addition, the company decided to increase the authorized share capital of the company from Rs. 2 billion to Rs. 3 billion, as part of the investment, which is subject to approval by shareholders of the company.

Ghani Global Glass has successfully entered in export business with Bangladesh, Egypt (MENA), Argentina and Mexico. Despite recent lockdowns, due to worldwide spread of COVID- 19, the company is expecting improvement in export business.

The company is continuously improving its production and supply system through innovations and effective cost containment initiatives in order to respond global and local demand.

August 6, 2020 (MLN): The Sub-Committee of the Board of Dolmen City REIT, after obtaining recommendations from Property Manager and the REIT Management Company, has deliberated on the strategy going forward and has decided to waive:

i) 35% rentals of the tenants having retail outlets in "Dolmen Mall Clifton" for the month of August 2020;

ii) Minimum rent will not be charged to tenants of "Dolmen Mall Clifton" for the month of August 2020 who are closed or have limited operations on government directives such as entertainment, children playing area and food outlets.

According to the notice sent by the company to PSX, the above discount will not apply to operational tenants who are providing essential services such as supermarkets and banks. This measure will provide essential cash flow relief to tenant partners already affected by the closure of the business.

"Dolmen City REIT stands fully committed with its tenants and willing to extend maximum possible support to all of them during the ongoing pandemic. DCR's management makes every effort to work in close collaboration with our business partners and we can understand the economic challenges that are being faced by the organizations due to COVID-19”, the notification said.

The vegetable oil price index posted the highest rise among all the sub-indices with 7.6%, a five-month high.

The FAO Dairy Price Index climbed 3.5% in the month, with all products from butter and cheese to milk powders rising.

The sugar price index went up 1.4% from June, as strong sugar crush numbers from Brazil only partly mitigated the effects of rising energy prices and the prospects of lower sugar production in Thailand due to a severe drought.

In contrast, the meat price index fell 1.8% month-on-month in July, the FAO said.

The rupee saw a volatility free session as very little movement was recorded trading in a range of 69 paisa per USD showing an intraday high bid of 168.60 and an intraday Low offer of 168.00.

Alternatively, the currency lost 1.7 rupees to the Pound Sterling as the day's closing quote stood at PKR 221.55 per GBP, while the previous session closed at PKR 219.85 per GBP.

Similarly, PKR's value weakened by 70 paisa against EUR which closed at PKR 199.36 at the interbank today.

On another note, within the money market, the State Bank of Pakistan (SBP) conducted an Open Market Operation in which it mopped up Rs.20 billion for 1 day at 6.89 percent.

August 06, 2020: On Wednesday at Pakistan Mercantile Exchange Limited, PMEX Commodity Index closed at 4,991. The traded value of Metals, Energy and COTS/FX was recorded at PKR 10.675 billion and the number of lots traded was 16,231.

US investors commit to improve bilateral economic engagement with Pakistan