Home Economy No delay in TAPI gas pipeline, project advancing as per ‘timelines’ 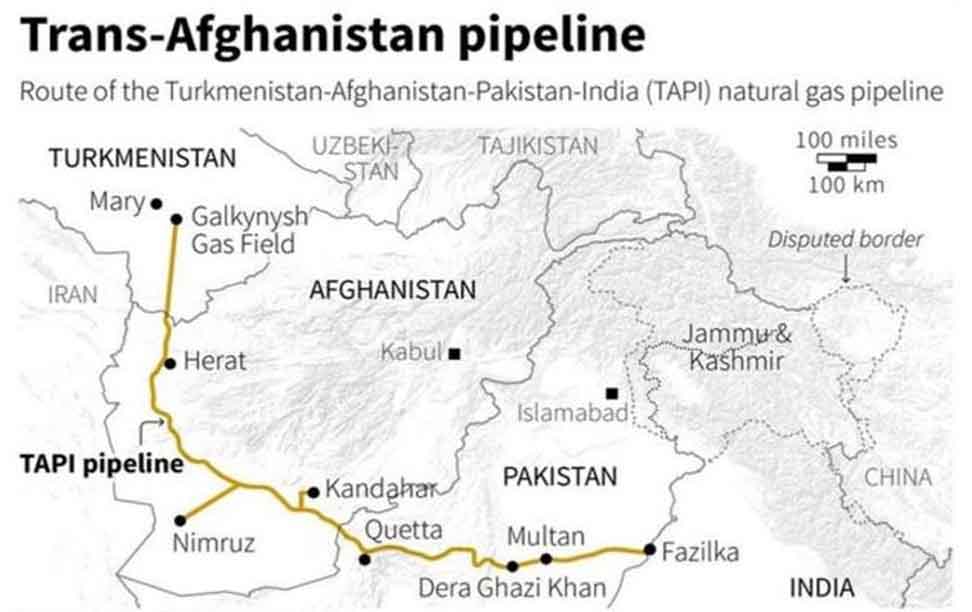 January 16, 2020: The Petroleum Division has said that the Turkmenistan-Afghanistan-Pakistan-India (TAPI) gas pipeline project was progressing as per the “timelines” agreed among the member countries and “there is no delay in the project.”

“The planned flow of non-compressed gas from the TAPI gas pipeline project is December 2023,” according to an official document available with APP.

Earlier, a senior official privy to petroleum sector developments had informed the APP that Pakistan was in process of renegotiating gas price with TAPI Project Company Limited (TPCL), following which a groundbreaking ceremony would be held for ‘Pakistan-Section’ of the multi-billion dollar trans-country gas pipeline in Chaman.

“We are keen to have a new compatible gas price under the Turkmenistan-Afghanistan-Pakistan-India (TAPI) project. Accordingly, renegotiation for the gas price will take place with the TPCL before the groundbreaking of the pipeline in Pakistan.” He was confident that Pakistan would complete Phase-I of the project within a period of 30-month after initiating the groundwork for laying the pipeline from Chaman to Multan via Quetta and Dera Ismail Khan.

The project consists of two phases. In the first phase, there will be a free flow of gas in the pipeline which would be completed at an estimated cost of $ 5 to 6 billion, while in second phase compressor stations to be installed at a cost of $ 1.9 to 2 billion.

Under the project, he said, a 56-inch diameter 1,680 kilometres pipeline, having the capacity to flow 3.2 billion cubic feet per day (bcfd) gas, would be laid from Turkmenistan through Afghanistan and Pakistan up to Pak-India border.

As per the TAPI agreement, Pakistan and India will be provided 1.325 bcfd (billion cubic feet per day) gas each and Afghanistan will be getting the share of 0.5 bcfd gas.

Replying to a question, the official said the member countries had signed an Intergovernmental Agreement (IGA) and Gas Pipeline Framework Agreement (GPFA) on December 11, 2010.

He said Turkmenistan had already completed the construction work on its section, while Afghanistan also performed the groundbreaking of the project in 2018.

He said Pakistan was regularly contributing its committed share to carry out the project activities, which made significant progress during the current year, adding that the technical consultant of the project had been appointed and the Front End Engineering and Design (FEED) completed for Pakistan-section of the project.

World Bank announces $300 mln for Pakistan to build resilience to Natural Disasters and...