HomeEconomyMPS preview: Another aggressive tightening around the corner
Economy

MPS preview: Another aggressive tightening around the corner

December 13, 2021 (MLN): The monetary policy meeting is scheduled for Tuesday, wherein SBP is expected to deliver another aggressive interest rate hike of 100bps or above.

Since the last MPC meeting, SBP has been under pressure to deliver another hike in the light of spiraling inflation, continued external pressure with Rupee depreciation showing no sign of dimming after hitting an all-time low of Rs177.89 interbank market close on December 13, 2021.

The recently released data paint a gloomy picture, suggesting an aggressive tightening stance to follow. First, preliminary merchandise trade data for November showed that imports hit a record high of $8 billion, up by 83% YoY which is a clear sign of potentially strong domestic demand and the resulting external pressure. The mounting import bill elucidates why the US dollar against the Pakistan rupee did not react positively to the 150bps interest rate hike in November, nor did it react positively to the resumption of the IMF plan and the official signing of the Saudi deposits contract.

Second, spiraling inflation is another point of pressure. With each passing month inflation worries echoing more clearly than before. In Nov’21 alone, headline inflation reached 11.53% YoY which was the highest monthly YoY increase since Feb’20 and core inflation accelerated for the second consecutive month. Food and energy-related commodity prices, such as oil, RLNG, and coal, as well as Rupee devaluation, are the main causes of overshooting inflation. The recent rise in inflation points towards higher inflation in FY22, as the growing consumer demand following the end of the epidemic suggests that inflationary pressures will persist for few months.

Finally, secondary market yields which have been directing the movement in the policy rate more or less over the last two MPC meetings, have shot up significantly in the past few days. Since the commencement of the rate hike cycle i.e., from September 20, 2021, the cut-off yield increased by 306bps for 3M T-bills to 10.66% as of December 14, 2021. While cut-off yield for 6-month and 12-month T-bill was recorded at 11.25% and 11.49%, up by 326bps and 276bps respectively, whereas the policy rate has risen 175bps only. The rising gap between the policy rate and yields leaves ample room for another hike of 100bps or above.

This time, again, market participants believe that SBP is likely to increase policy rate at a higher magnitude of 100 bps or above. A survey of financial market participants conducted by Mettis Global Pvt Limited revealed that about 77% of the participants expect an interest rate hike of 100bps or above in the upcoming monetary policy meeting as compared to 56% in the Nov-21 meeting survey. 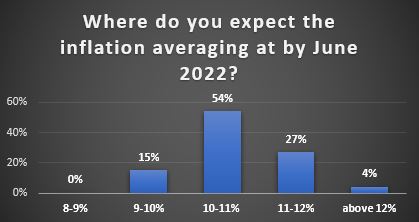 On the exchange rate front, the Rupee is continuously showing a declining trend against the USD. Since last MPS, Pak Rupee has lost Rs2.5 against USD due to deteriorating forex reserves and a massive increase in the current account deficit which reached $5.2 billion in 4MFY22.

However, according to REER, the performance of the Pakistani currency should improve as REER is below 100, the Pak Rupee depreciated by 13% during FY22 to date. The SBP is expected to tackle PKR depreciation through an increase in the policy rate, Abdul Azeem analyst at Spectrum Securities said.