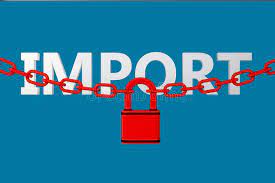 May 20, 2022 (MLN): With $16.16 billion in foreign exchange reserves on hand to cover import bill for 1.5 months, inflation on year on year surged to 13.4% in April 2022 and the upward dollar’s flight against PKR, breaching the 200 mark has triggered an economic emergency.

Yesterday, the incumbent government imposed a ban on the import of non-essential luxury items to redress current economic woes under the 'Comprehensive Economic Plan'.

“A comprehensive economic plan had been formulated under which a fiscal management policy would be introduced to steer the country out of the current economic crisis. The plan would help reduce the country’s reliance on foreign debts,” Minister for Information and Broadcasting Marriyum Aurangzeb said yesterday.

The cash-strapped country has been hit hard by a storm of deepening debt crisis, the out-of-control current account deficit, depleting foreign exchange reserves, and free fall of the domestic currency.

Among a host of imports that are banned include cars, cellular phones, home appliances, and cosmetics.

“My decision to ban the import of luxury items will save the country precious foreign exchange”, Prime Minister Shehbaz Sharif said on Twitter.

“We will practice austerity & financially stronger people must lead in this effort so that the less privileged among us do not have to bear this burden.”

According to several brokerage houses, the government’s move will likely have an estimated saving of $100mn per month.

This development has potential benefits for local auto assemblers where prime beneficiaries would be INDU, PSMC, HCAR and LUCK. The ban on imported cars will likely increase localization and accelerate investments.

While the temporary ban on CBU mobile phones would save $27.5mn in a month which will surely curtail the current account deficit. Market experts believe that Airlink and Luck (Samsung) might gain from this ban.

It is pertinent to note that the import bill on the mobile phones was recorded at $1.8bn during 10MFY22.

Further, the country can save $19.5mn monthly on import ban on dry fruits.

As per the government, these measures would have a positive impact on the balance of payment and help in controlling the slippage of PKR against USD. However, these measures are insufficient and might lead to a further increase in smuggling via western borders due to a ban on some items that include pasta, shampoo, cornflakes and fish.

“All these would be smuggled and the money to transfer through a reduction in formal remittances. The net external account impact [would be] too little”, an independent Economist Ali Khizar tweeted.

Perhaps, it may or may not cover the loss of forex reserves on smuggling of diesel due to massive subsidies, he noted.

These steps are directionally right but the government has chosen the easiest way to tackle pressure on FX reserves. The research report by Insight Securities believes that this measure is a temporary patch and much-needed reforms are required, as the government has to take tough decisions such as reversal in petroleum/electricity subsidies to bring IMF on board which is necessary to support the country's external financing needs.

June 27, 2022 (MLN): Pakistan has signed an agreement with France to get a suspension of loans worth $107 million under the G-20 Debt Service Suspension Initiative (DSSI) frameworks, a press release said today.