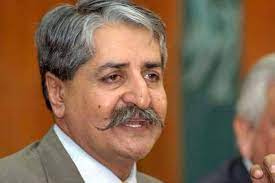 May 12, 2022: Federal Minister for Commerce, Syed Naveed Qamar said here that the Ministry of Commerce was working on a policy to enhance trade and connectivity with Central Asia, through Afghanistan and Iran.

The ministry has already taken several measures to materialize this policy, the minister said in a written reply to a question to National Assembly.

He said Pakistan and Afghanistan have finalized and implemented the main operational part of the Afghanistan Pakistan Transit Trade Agreement (APTTA 2021) which would ensure the free movement of trucks between the two countries.

He said an agreement between Uzbekistan and Pakistan on Transit Trade was signed on July 15, 2021, which provides free movement of trucks between Pakistan and Uzbekistan.

The transit trade agreements, he added, were also being negotiated with Kazakhstan and Tajikistan while Pak-Uzbekistan Preferential Trade Agreement (PTA) was signed on March 3rd, 2022.

The Agreement provides preferential access of products of one country in the market of the other, by eradicating trade barriers.

He said PTA was also being negotiated with Azerbaijan whereas Pakistan had also established Joint Working Groups (JWGs) on Trade with Uzbekistan, Kazakhstan, Tajikistan, Azerbaijan and Turkmenistan.

The JWGs would help to ensure economic cooperation by holding business forums, exhibitions, and seminars, and eradicating technical barriers to trade by harmonizing standards.

The minister said, Pakistan and Iran had established a framework of the Joint Trade Committee, under which economic cooperation in the fields of trade, banking, and customs are agreed.

Pakistan has also signed customs and banking cooperation agreements with Uzbekistan, Iran and Afghanistan and had been negotiating Mutual Recognition Agreements with Central Asian Republics on SPS and technical standards.

National medicine policy to be announced in next two weeks: Zafar Mirza