To note, on Nov 24, the rating agency noted that country’s recent policy adjustments and demonstrated access to external financing, as well as its commitment to a market-determined exchange rate, offset rising external risks from a widening current-account deficit. Ongoing reforms, if sustained, could create positive momentum for the sovereign’s ‘B-’ rating which it affirmed in May 2021 with a Stable Outlook.

In its latest report, it stated that the brightening economic outlook and prospects for policy normalisation are resulting in reduced rating pressures for Asia-Pacific (APAC) sovereigns.

Fitch recently upgraded Taiwan (AA) and the Maldives (B-), with the former benefitting from sustained export demand and the latter from tourism inflows. It revised the outlook on Australia to stable from negative last October on improved fiscal consolidation prospects.

However, it retained negative outlooks on India and Japan with high pubic debt ratios and uncertain trajectories, and the Philippines and the Philippines which has been especially hard hit by the virus. Ratings in some of the region’s frontier markets, such as Laos, and even more so Sri Lanka with rising default risks, remain weighed down by heavy external debt obligations against low foreign-exchange reserves.

“Economic growth across the Asia-Pacific region should broaden in 2022 with rising vaccination rates and tailwinds from exports. Domestic demand in emerging markets, which was held back over the past year, should strengthen, allowing Covid-19 relief measures to unwind gradually and fiscal deficits to narrow,” Stephen Schwartz, Head of APAC Sovereign Ratings said. 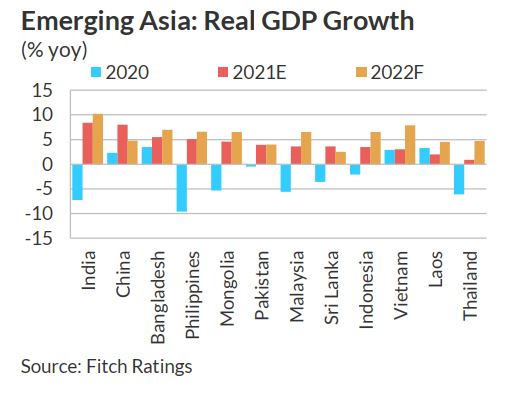 The rating agency projects fiscal deficits to narrow in nearly all APAC sovereigns in 2022, as relief measures unwind and revenue ratios rise with the recovery of domestic demand. The narrowing of deficits will generally be modest, however, as governments exercise caution in withdrawing support in view of fragile recoveries and risks to the outlook.

The report noted that consolidation strategies were delayed in APAC emerging markets in 2021, as authorities grappled with further outbreaks of Covid-19. For example, Malaysia (BBB+/Stable) rolled out a series of fiscal support packages in 2021. Indonesia (BBB/Stable) relaxed budget targets for 2021 and 2022, even though the authorities aim to bring the deficit back to within their 3% of GDP ceiling by 2023.

In developed markets, by contrast, support packages have been much larger and consolidation efforts are proceeding more steadily, where fiscal relief packages were larger relative to GDP than in emerging markets and where vaccine rollouts are more advanced.

On the monetary front, it is expected that monetary policies would remain accommodative, with inflation staying subdued in APAC, though it is anticipated that interest-rate hikes are likely to continue in South Korea and New Zealand as their recoveries solidify, and in ‘frontier markets’ facing external pressures such as Sri Lanka and Pakistan.

The report anticipates rate hikes to begin later in the year in emerging markets such as India and Indonesia. Japan’s accommodative stance should remain on hold. While rating agency expects some easing in China as the authorities seek to cushion the economic impact of other initiatives that are slowing growth. These include measures to contain property-sector financial excesses, a regulatory crackdown on internet-based companies, and the imposition of mobility restrictions in pursuit of “zero-Covid”.

Meanwhile, Fitch sees the sector outlook for APAC sovereigns in 2022 as improving, but China's economic slowdown stands among a number of factors that could pose challenges. Others include the potential for further Covid-19 outbreaks and new variants such as Omicron and difficult financing conditions associated with US monetary tightening and dollar appreciation. The path of policy normalisation could influence sovereign ratings in APAC, particularly for those on Negative Outlooks, such as India (BBB-/Negative), Japan (A/Negative) and the Philippines (BBB/Negative).

Unilever and GSK did not immediately respond to Reuters' requests for comment.

Unilever could eventually sell some non-core assets from the GSK portfolio to buyers including private equity firms, which could help fund an acquisition, the Bloomberg report added.

The benchmark palm oil contract for April delivery on the Bursa Malaysia Derivatives Exchange slid 35 ringgit, or 0.71%, to 4,921 ringgit ($1,175.87) a tonne during early trade, its lowest since Jan 5.

Bursa Malaysia will be closed on Tuesday for the Thaipusam festival.

* Exports from the world's second-largest palm oil producer during Jan. 1-15 fell between 32% and 45% from the same period in December, cargo surveyors said on Saturday.

* Dalian's most-active soyoil contract rose 0.1%, while its palm oil contract slipped 0.2%. The Chicago Board of Trade were closed for a public holiday.

A holiday in the United States made for thin trading, but that did not stop Treasury futures from sliding further and Brent crude hitting a three-year top of $86.71 a barrel.

Worryingly for the world's second-largest economy, retail sales rose only 1.7% year-on-year in December, missing forecasts for a 3.7% rise.

Industrial output did fare better and the economy as a whole grew little above forecasts at 4.0% in the fourth quarter.

"The cut was larger than expected, suggesting that the authorities have become more preoccupied about weakness in the economy," said Carlos Casanova, senior Asia economist at Union Bancaire Privee in Hong Kong.

"The latter (Omicron risks) will only start to be fully priced in the combined Jan-Feb data, as the most severe lockdowns started in late December."

The easing seemed to help China blue chips, which edged up 0.4% in the wake of the data.

The main feature of the market recently has been a rotation into value stocks and away from growth, particularly technology. The S&P 500 information technology sector, which accounts for nearly 29% of the index, has shed 5.5% this year.

With valuations still high, earnings will have to be strong to stop further losses. Overall S&P 500 earnings are expected to climb 23.1% this season, according to Refinitiv IBES, while the tech sector is seen up by 15.6%.

The market will be spared speeches from U.S. Federal Reserve officials this week ahead of their Jan. 25-26 policy meeting, but there have been more than enough hawkish comments to see the market almost fully price in the first-rate hike for March and rates of 1.0% by year-end.

There was also talk the Fed will start trimming its balance sheet earlier than previously thought, draining some of the excess liquidity from world markets.

Yields on cash 10-year Treasuries climbed to their highest in a year at 1.8% last week, while the implied yield on futures jumped to 1.86% on Monday.

A Bank of Japan (BOJ) policy meeting this week will bear watching the given talk it will revise up its outlook for growth and inflation, while sources told Reuters policy makers were debating how soon they could start telegraphing an eventual interest rate hike.

While a move is unlikely this year, financial markets may be underestimating its readiness to gradually phase out its once-radical stimulus programme.

This was one reason the yen rallied, with the dollar slipping 1.2% last week. On Monday the dollar had regained some ground to 114.45 yen still well above major chart support at 112.52. [FRX/]

"We continue to think that the greenback will strengthen again before long, as we expect strong cyclical price pressures in the U.S. to mean the Fed tightens by more and for longer than investors currently discount," argued Joseph Marlow, an economist at Capital Economics.

The risk of higher rates kept non-yielding gold restrained at $1,816 an ounce, while industrial and energy resources have benefited from resilient demand and limited supplies.

Oil prices have climbed for four weeks straight and such is demand that physical barrels of oil is changing hands at near-record high premiums.

January 17, 2022: China's central bank on Monday unexpectedly cut the borrowing costs of its medium-term loans for the first time since April 2020, while some market analysts expect more policy easing this year to cushion an economic slowdown, Reuters reported today.

The People's Bank of China (PBOC) said it was lowering the interest rate on 700 billion yuan ($110.19 billion) worth of one-year medium-term lending facility (MLF) loans to some financial institutions by 10 basis points to 2.85% from 2.95% in previous operations.

Thirty-four out of the 48 traders and analysts, or 70% of all participants, polled by Reuters last week predicted no change to the MLF rates in January, with the rest betting on a rate cut.

The world's second-largest economy has shown signs of slowing after a rapid rebound from the COVID-19 slump, with concerns about the financial health of property developers and the rapid spread of the Omicron coronavirus variant clouding the outlook.

"The PBOC's decision to ease early in January suggested that economic downward pressure intensified at end-2021 and room for improvements in the first quarter of this year is not huge," said Ken Cheung, chief Asian FX strategist at Mizuho Bank.

Cheung expects that the PBOC could deliver more easing measures this year than previously expected by market analysts.

Such expectations were also reflected in the bond market, with China's 10-year treasury futures rising to their highest level since June 2020 and the yield on China's benchmark 10-year government bonds falling more than 2 basis points in early trade.

Market analysts said the size of the rate cut and the timing were a big surprise, and they believe further monetary stimulus could follow.

"However, the 10-bps cut was larger than expected, suggesting that the authorities have become more preoccupied about weakness in the economy," he said, adding he also expects an additional 100 bps reduction to banks' reserve requirement ratio (RRR) this year.

With a 500-billion-yuan worth of MLF loans maturing on Monday, the operation resulted in a net injection of 200 billion yuans into the banking system.

The central bank also lowered the borrowing costs of seven-day reverse repurchase agreements, or repos, by the same margin to 2.10% from 2.20%, when it offered another 100-billion-yuan worth of reverse repos into the banking system. ($1 = 6.3524 Chinese yuan).

Palm down on profit taking

Banks: Back in the limelight