Will rising rates in west put RDA investment at risk?

November 12, 2022 (MLN): The most hyped Roshan Digital Account (RDA), one of the few avenues to attract foreign exchange in the land of cash strapped country, has started losing its charm for the investor fraternity as only $147 million have added in the month of October 2022 compared to $266mn inflows in October 2021.

Since the launch of RDA in September 2020, the country has been able to attract $5.3 billion through Naya Pakistan Certificates (NPCs) which offer attractive risk-adjusted returns over different maturities and Pakistan Stock Exchange. Analyzing the numbers available, a few months ago, inflows of over $200mn, close to $300mn, and even in June 2021, $310mn had been added in a month. However, in a parabolic move, the inflows are shrinking gradually as the number of inflows is increasing at a decreasing rate.

Finding out the possible reasons, MG Link News approached the experts who have been closely working on RDA since its inception and received trivial responses.

“Spread amongst other investment instruments, especially in the west are getting closer thus we see less inclination of inflows through RDA,” one of the commentators unveiled.

When we take a closer look at the dollar-based and PKR-based returns offered by the instruments under RDA i.e., NPCs, it was noted that during the whole period, the rates remained unchanged while, the returns on other instruments like US treasury bills have been increasing.

Resultantly, the inflows from Non-Resident Pakistanis (NRPs) were more inclined towards RDA through NPCs.

Thus, the spread is keep getting closer and the attraction of Non-Resident Pakistanis (NRPs) towards NPCs has started taking another route to park their money. 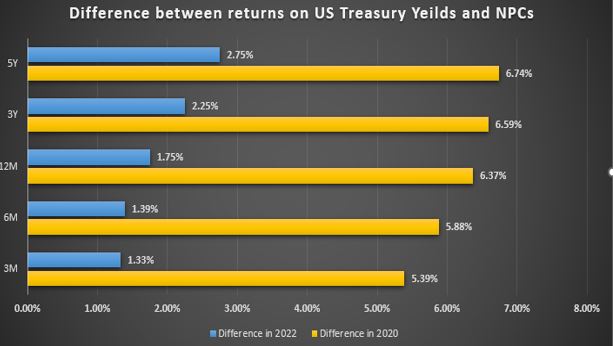 Recently, Fed made the sixth jumbo rate hike in interest rates to over 4% in 2022 to quash the fastest inflation in the last 40 years while signaling more rate hikes in days to come which will obviously keep the rising trend of returns intact. Keeping this in view, slowly and gradually, NPCs might lose all of their attraction if the central bank does not take the rate of return into consideration.

With regards to return in PKR, the T bills in Pakistan are offering noticeably higher returns for similar maturities at present. 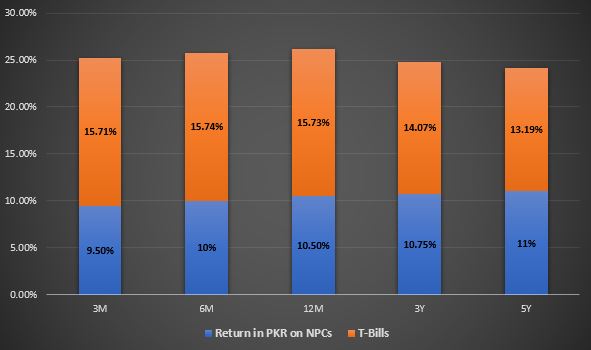 Since the potential of RDA has been harvested and the product is in the phase of natural normalization after witnessing remarkable growth given the present rate of return, the navigation through interest rate is the need of time if authorities do not want to close one of a few doors of foreign exchange.

It is pertinent to mention that the central bank is already working to advance this product by adding more features and covering more avenues after Roshan Apni Car and Roshan Samaji Khidmat such as Roshan Equity Investment, and Roshan Apna Ghar.

The financing is available in both conventional and Shariah-compliant variants at very attractive rates for a period of three to twenty-five years. The end-to-end digital process and simplified mechanism make it a convenient and fast process for Overseas Pakistanis to invest in Pakistan’s real estate sector or equity market.

Despite working aggressively on the innovative side, there is a dire need to increase the interest rate on NPCs to make RDA more attractive as the arbitrage rate amongst other instruments is getting narrowed plus instability in USDPKR is also a prime concern.

*The writer is a Senior Reporter at Mettis Global and can be reached at nilam.bano@mettisglobal.com