December 29, 2022 (MLN): Rising economic uncertainty gave bulls the opportunity to rule the domestic bullion market as people consider their trusted jewelers to keep safe-haven gold. However, they do not know that they are going to lose all in an effort to save some.  A big scam is being awaited to surface up!

Since domestic bullion falls largely under the cover of the undocumented economy which means that there is no legislation to be followed by the bullion market.

In simple words, the trusted jewelers are not obliged or answerable to anybody or authority for what they are going to do with people’s money which is being kept in the name of the trust.

The upward trajectory of demand for gold started after rumors about defaulting and the accounts in banks might get seized in that case.

Breaking all the previous records, the precious metal marked an all-time high of Rs192,000 per tola of 24karat on December 21, 2022, in domestic bullion (as per sources) which had caught everyone’s attention while in a surprise move, the All-Pakistan Sarafa Gems and Jewellers Association (APSGJA) did not release the gold rates on the same day quoting uncertainty and chaos as the primary reasons behind its decision. 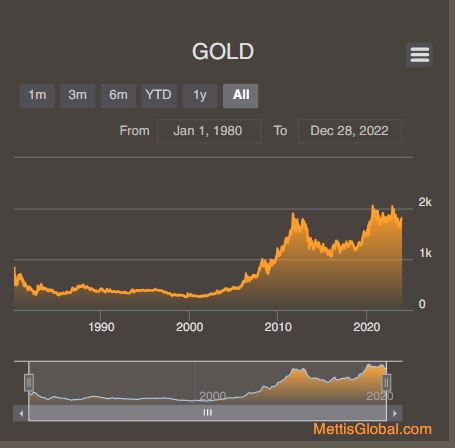 APSGJA President Haji Haroon Rasheed Chand, in a public message, confirmed the bullion rates were stopped intentionally because of the “uncertain market situation”.

Given this bullish ride, within the month of December 2022, the yellow metal gained over 12% or nearly Rs20,000 per tola.

When was this trust story started? And how it will turn into a Scam?

In the subcontinent, family Jewelers have been considered the most trustworthy entity for hundreds of years. And still today, the trust is there.

However, given the helter-skelter times when dollars become rare in the open market, investors and the general public prefer gold as a defensive investment against mounting inflation.

Here the factor of so-called trust comes in. The buyers of gold are giving their lump sum money to the jeweler and asking him to buy gold on their behalf of them from the market and keep it under the jeweler’s custody (on the basis of trustworthiness).

As per well-informed sources, this is being practiced by a large number of investors. Despite the limited amount of physical gold available in the market, the dealers of gold are taking money from everyone who appears at the counter to buy gold as a hedge. Thus, the price of gold kept surging in recent days.

Having said that, when this panic-like situation gets settled, and people will go and ask for their gold, they will get nothing as no gold against their money was bought. Scammers might fly away before anyone realizes the situation.

In other words, there is a possibility that dealers may not buy any gold against the general public or investors’ money and just exploit their sentiments by luring them. In the end, there will be another historic chaos will appear wherein all people would lose all of their money.

Gold is not regulated by any government entity

It is important to mention that Pakistani bullion is a piece of cake for scammers since there is nothing like a regulated body there.

The yellow precious metal being traded in the bullion market is completely unregistered as no legislation is available to be followed, Zahid Mansoor, Chief Business Officer at Pakistan Mercantile Exchange (PMEX) told MG Link News.

As a result, the national exchequer is losing over Rs200 billion as tax revenue which could be generated if the government registers domestic bullion under-documented economy.

Adding that, he said, “We have not yet received any directives from the government to legalize or register physical gold under commodity market.”

“PMEX has the capacity and the ability to centralize the gold being traded physically in domestic bullion. We are just waiting for the government’s nod in this regard,” he noted.

Haroon Chand in its public message clearly said that there is no such demand in the local market for gold but the speculators are taking advantage of the situation which took gold prices to exorbitant rates.

It is pertinent to mention that the association determines and notifies the gold rates by keeping in view its rates in the international market, the exchange rate, and the demand in domestic markets.

Speaking to MG Link News, Haroon Chand said, “Given the uncertainty, the price of gold may cross Rs200,000 per tola in the domestic bullion.

Talking about the trust factor, he advised everyone trading gold not to trust even your family jeweler, adding this, he mentioned that certain cases have already surfaced up and the affectees could not file the complaint officially as the sector is not documented.

“Considering the uncertainty and ongoing fraudulent activities, it is the need of time to document this sector,” he emphasized.

In the absence of any documentation, the gold is being smuggled which resulted in a loss of millions of rupees to the national exchequer, he underlined.

He also revealed that a delegation of the Financial Action Task Force (FATF) has expressed interest to visit Sarafa Market and intends to register dealers whose turnover is above Rs2mn per month.

Haroon Chand also suggested the government lift ban on gold imports. Upon asking, he said that the gold was officially imported in 2014-15.

On the other hand, the data issued by the Pakistan Bureau of Statistics showed that the country imported 35 kilograms of gold in the month of November 2022, worth $2.18 million, down by 11% MoM and 32% YoY.

To recall, the public went through a big scam in 2015 wherein the scammer deprived them of their hard-earned money in the Modaraba scam worth Rs8.2bn.

Need to regulate this market

All in all, the ongoing situation is inviting another historic scam in Pakistan, and to prevent the country from another such disaster, the government’s immediate intervention is the need of the hour.

In order to regulate the bullion market, the government should introduce a one-time amnesty scheme so that dealers/gold owners can fearlessly show their possessions to get themselves registered.

Countries like China and India are examples of The People’s Bank of China regulating gold in China and the Securities and Exchange Board of India (Sebi) in India.

Replying to the question pertaining to the gold custody, Zahid Mansoor said that the custodian of gold should be PMEX due to the traded nature of gold. Further, he added that sovereign gold is kept with the central bank.

On the other hand, President APSGJA was of the view that all the gold should be kept under the custody of the State Bank of Pakistan (SBP).

Not to forget the importance of digitalization, the authorities should go for digital gold to make the investment easy for the general public.

PrevPreviousPSX Closing Bell: Moth To the Flame
NextEFERT can produce urea up to 950,000 tons per annumNext
FOREX
EQUITY
COMMODITIES
FOREX