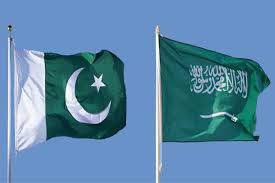 Ambassador of Saudi Arabia, Nawaf Saeed Al-Malkiy has said that his country was keen to further strengthen trade relations with Pakistan as both countries have great potential to promote bilateral trade in many areas.

He said that Saudi Arabia considered Pakistan a very important brotherly country and will stand shoulder to shoulder with it in every critical situation. He said both countries were facing some challenges and strong mutual cooperation was needed to cope with them. He said Pakistani media should play positive role in highlighting economic potential of their country.

He was addressing business community at Islamabad Chamber of Commerce and Industry. Mr. Abdullah Sabr, Director of Economic Affairs of Saudi Embassy was also present at the occasion.

The Saudi Envoy said that business visa regime on both sides was a problem and he had already discussed this issue with the relevant authorities of both countries to liberalize it for businessmen. He said Saudi Arabia was interested in CPEC and added Pakistan should improve security, roads infrastructure and facilities to attract foreign investment including from Saudi Arabia. He said lot of developmental projects were envisaged in Saudi Arabia under Vision 2030 and Pakistani investors should explore joint ventures and investment in his country. He said that after 3rd Dec: 2017, biometric verification for Pakistani Umrah aspirants would be free for three months. He assured that his Embassy would fully cooperate with Pakistani business community in visiting Saudi Arabia.

Speaking at the occasion, Sheikh Amir Waheed, President, Islamabad Chamber of Commerce and Industry said that cordial relations between Pakistan and Saudi Arabia should be translated into growing trade and economic relations as the bilateral trade of $2.5 billion was not reflective of their actual potential. He said Pakistan and Saudi Arabia were doing trade in limited items and they should focus on diversification of trade to further enhance trade volume.

He said many Pakistan products including value-added textiles, surgical instruments, sports goods, organic foods, financial services, insurance & IT services and entertainment products could find good market in Saudi Arabia and it should focus on importing these products from Pakistan. He said that given the manufacturing base of Pakistan, our country has much more to offer to Saudi Arabia and efforts should be made to exploit huge potential of bilateral trade lying unrealized between the two countries. He said Pakistani manpower was playing key role in the economic development of Saudi Arabia and Saudi Arabia should address all manpower related issues. He said Saudi investors should explore JVs and investment in CPEC.

Muhammad Naveed Senior Vice President and Nisar Mirza Vice President ICCI said that Pakistan was trying for a Free Trade Agreement with Gulf Cooperation Council and hoped that signing of FTA would give big boost to Pakistan's trade with Saudi Arabia and Gulf region.

They said Vision-2030 of Saudi Araba and CPEC also offered great potential for joint ventures and investment between the two countries and both countries should streamline business visas so that private sectors could fully exploit untapped business opportunities. They said frequent exchange of trade delegations and organizing single country exhibitions would help in improving trade relations.

Complete rice cultivation in July could be beneficial for growers: agriculture experts