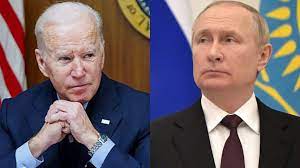 “President Putin has chosen a premeditated war that will bring a catastrophic loss of life and human suffering,” he said in a statement.

Russian troops and tanks pushed into Ukraine and airstrikes hit the country’s capital and more than a dozen other cities early Thursday after President Vladimir Putin said he ordered a military operation to “demilitarize and de-Nazify Ukraine” and bring its leaders to trial, as reported by Wall Street Journal.

Ukraine’s border service said its troops came under attack all along the country’s frontiers with Russia and Belarus as well as Crimea, it said.

Heavy shelling targeted the city of Mariupol on the Azov sea. Air-raid sirens sounded in Kyiv after 7 a.m. and the city’s airport came under attack.

Ukraine’s military said it shot down five Russian warplanes and one helicopter. Russia denied any of its aircraft were hit, it noted.