September 23, 2021 (MLN): Pakistani rupee (PKR) continued its downward journey on the second consecutive session, depreciating by 36 paisa against the greenback in today's interbank session as the currency closed the trade at PKR 169.03.

The rupee traded within a very narrow range of 43 paisa per USD showing an intraday high bid of 169.09 and an intraday Low offer of 168.80.

Expressing his views on the current situation of Rupee, Asad Rizvi, the former Treasury Head at Chase Manhattan said, “While the domestic unit takes a breather, but the threat still looms, as demand is not subsiding. The big question is how many monetary tools are left in SBP’s sleeves to defend PKR? How much Fiscal tightening is needed?”

“In my opinion, minus IMF it is still manageable,” he added.

In a series of Tweets, he mentioned that in yesterday’s T-bills auction, the cut-off yield was as per projection. The three months yield was up by 40bp and 6 months by 49bp. Though, inflation is likely to remain below 9% until December 2021, the market is sensing a sudden shift in SBP Policy stance.

Bank’s Treasury is of view that July forward guidance did not provide enough clues. SBP could have hinted at policy shift earlier through its various OMO Injections worth Rs2.1trillion, what worries is the Banks GOP holdings, the Stock is worth Rs12.5tr.

Bank’s investment is huge and the market is illiquid, which suggests due to its holdings banks P & L will be badly hit if the surge in yields does not stop.

“The timing of HIKE is very awkward and risky because in the last quarter of the calendar year banks run for fresh deposits that push rate higher. Whereas, prior to the meeting with IMF for tranche clearance, Hike, Rupee & Fiscal adjustment seen in other areas conveys an obvious message,” he noted.

He also stated that until the next Policy Announcement, there are over dozens of T-bills, PIB fix, and floating rate auctions.

“The market is likely to bid aggressively, as GOP holdings of Rs2.1tr are OMO injection & not banks funding. But tougher times are ahead unless well managed by the CB & Fiscal Managers,” he underlined. 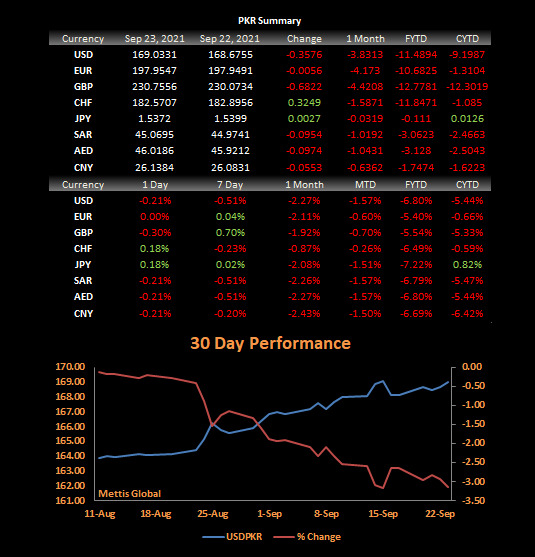 Meanwhile, the currency lost 68 paisa to the Pound Sterling as the day's closing quote stood at PKR 230.76 per GBP, while the previous session closed at PKR 230.07 per GBP.

Similarly, PKR's value weakened by 1 paisa against EUR which closed at PKR 197.95 at the interbank today.

On another note, within the money market, the overnight repo rate towards the close of the session was 7.15/7.25 percent, whereas the 1-week rate was 7.25/7.35 percent.

PKR depreciates by 2.8 rupees over the week

A new normal: UN lays out roadmap to lift economies and save jobs after...

SNGPL allows its domestic consumers to pay bills in Installments