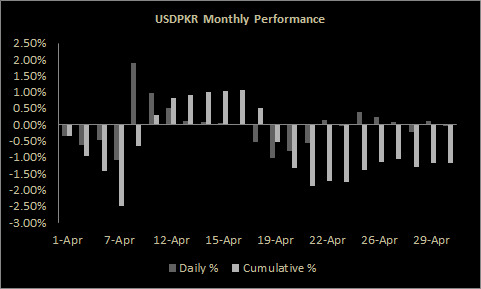 May 09, 2022 (MLN): Bleak macros along with political noise have made the ground most uncomfortable for the local unit in April 2022 as the Pakistani rupee (PKR) dropped by 2.2 rupees or 1.19% against the greenback in the interbank market while riding a seesaw pattern compared to 0.45% depreciation in April 2021.

However, in the previous month, the miserable currency lost its worth by Rs6 per US dollar or 3.27% against the notable appreciation in March 2021, wherein, the local unit secured its position by 3.50%.

After enduring a strong spell of depreciation owing to the No confidence vote and ouster of former Prime Minister Imran Khan, the domestic unit witnessed a rebound during the first two weeks of April due to clarity on the political front after Supreme Court's (SC) decision to restore National Assembly.

Meanwhile, the SBP’s bold move of increasing the policy rate by 250 basis points to 12.25% to counter the external shocks and inflationary pressures has also eased off some pressure from PKR.

In addition to it, SBP imposed a 100% cash margin requirement on certain items to control imported inflation and support the balance of payments.

However, the gaining streak could not last for long and the rupee took a hit on gloomy macros. The rising trade deficit on the soaring import bill, raging oil prices in the international market, and depleting foreign exchange reserves have created enough pressure on PKR.

There was a time when experts were of the view of declaring an economic emergency in the country as it was captured by economic and political upheaval.

As the newly formed government took the charge of cash strapped economy where it managed to hold constructive talks with the International Monetary Fund (IMF), the PKR again made a comeback, gaining over one rupee against USD in an intraday trade on April 25 in the interbank market.

“We had very productive meetings with the Finance Minister of Pakistan Miftah Ismail over Pakistan’s economic developments and policies under the Extended Fund Facility (EFF) program. We agreed that prompt action is needed to reverse the unfunded subsidies which have slowed discussions for the 7th review”, Mr. Nathan Porter, IMF Mission Chief for Pakistan, a statement by IMF said.

Now the new session of talks between Pakistan and the International Monetary Fund (IMF) will likely hold on May 18, 2022, in Doha.

According to the money market experts, in the wake of depleting foreign exchange reserves, the economy will once again get breathing space after the loan is sanctioned.

Going forward, based on the assumption that Pakistan successfully completes the seventh review of IMF and subsequently tranche is released followed by potential inflows from bilateral agreements, import bill starts tapering off and momentum in export growth continues, it is expected that PKR to recover in the near term, settling at around 182 per USD by June 2022 and then with annual 4% depreciation assumption, clocking-in at 186 per USD by December 2022, Sana Tawfik, Analyst at Arif Habib Limited said.

All said, a resurgence of coronavirus infections and uncertainty over the geopolitical and economic situation impact could see PKR forecasts change in FY23 and beyond, she added.

June 29, 2022 (MLN): The coalition government has started consultation on procuring Russian oil and gas at much cheaper rates than currently available in the international market.

In this regard, the Petroleum Division has written a letter to the head of four major oil refineries – Pak-Arab, National Refinery, Pakistan Refinery Limited (PRL) and Byco Petroleum.

The ministry has also sought cost and benefit analysis-based details of Transportation/freight rates for imports from Russia in comparison with normal imports from the Middle East.

“What will be the method of payment for crude oil purchased from Russia”, the ministry asked the oil refineries in a letter.

Moreover, the existing commitment of upliftment from the Arab Gulf region with respect to Term Contracts has also been requested.

Sources claimed that officials of the Petroleum Division have held separate informal meetings with heads of oil refineries. The coalition government will hold a meeting with four major refineries today (Wednesday), ARY reported.

Meanwhile, it is important to mention that former prime minister Imran Khan and his cabinet were ready to purchase oil at 30% cheaper rates compared to other suppliers. However, his government was ousted from power due to Russia's visit.