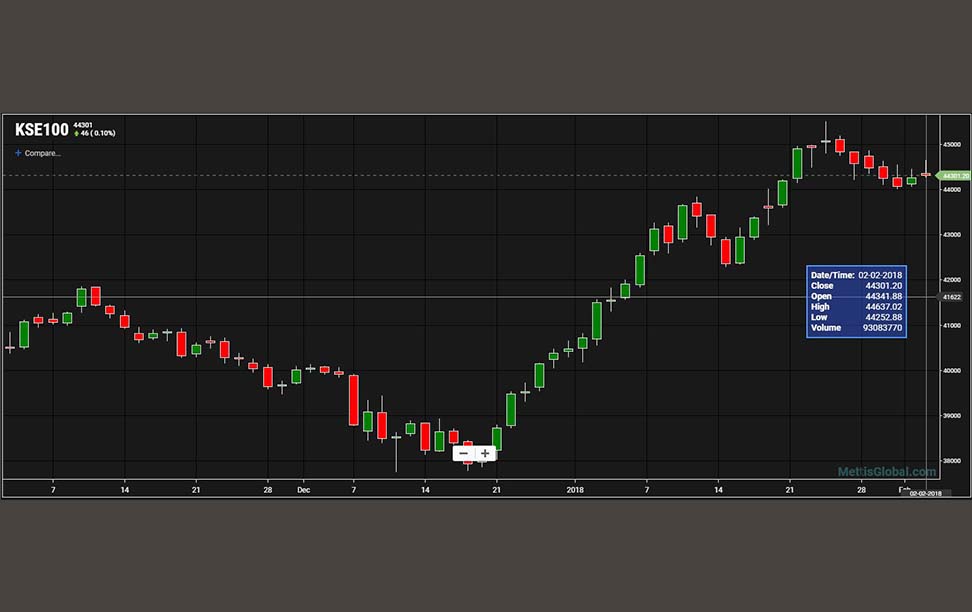 Pakistan’s Karachi Stock Exchange today closed the relatively un-moved after it gained just 45 points during the day. Chemical Stocks led the volume during the day as Lotte Chemical released financial results for the year.

Lotte Chemical Pakistan (LOTTE) today released financial results for the year ending December, 2017. The company reported a Revenue increase of 6.47% to reach Rs. 37.034 billion up from Rs. 34 billion during the same period last year. Company’s bottom line grew by 27% to Rs. 412 million against last year’s tally of Rs. 323.831 million. The company earnings per share clocked in at 0.27 per share vs. 0.21/ share last year.

According to figures released by the Pakistan Bureau of Statistics, weekly SPI for the combined group decreased by 0.19% compared to the previous week (Jan 25, 2018), meanwhile registering an increase of 1.69% compared to the corresponding period (Feb 2, 2017) last year.

The index movement was limited within the 384.14 points range.

46 companies closed up, whereas 44 were down at the day end.

Closing Bell: The day after!

Azgard-9 to resume operations at the previously closed facility in Lahore...

HUBCO clarifies that no agreement regarding Sukuk issuance has been executed...