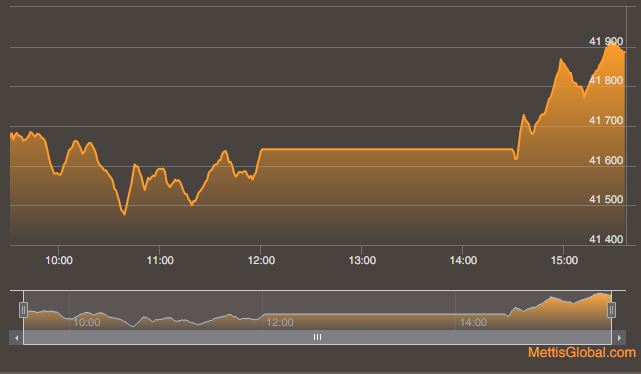 Pakistan Stock Exchange today continued on its weeklong rally after going through its worst week (last week) during 2017. Index has gained a significant momentum after the political storm slowly yet surely subsides as ex-PM Nawaz Sharif along with his family was indicted in the corruption cases by NAB courts. Index has also been buoyed on the back of Prime Minister's announcement to setup a stock market fund.

Engineering and Chemical stocks witnessed most turnover during the day as the index volume was around the same level as yesterday, hovering at 110 million levels.

Habib Bank Ltd. announced nine months earnings of Rs. 1.5 billion PKR against the 25.7 billion PKR during the same period last year. The bank profits declined after it paid off a 23.7 billion penalty imposed by the Department of New York Financial Services early in September. The bank agreed to settle the decision outside the court and agreed to pay a penalty of USD 225 million.

Index activity remained almost the same as of yesterday dropping merely by 2 million during the day. However, the value traded declined 7.5%, as investors weighed in on the market sentiment.

The index movement was limited within the 684.48 points range.

66 companies closed up, whereas 17 were down at the day end.

June 15, 2021 (MLN): The Pak Rupee lost ground to the dollar in an intraday session, opening weaker and losing further value. It has so far depreciated by 45 paisa since yesterday against the USD at the interbank market.