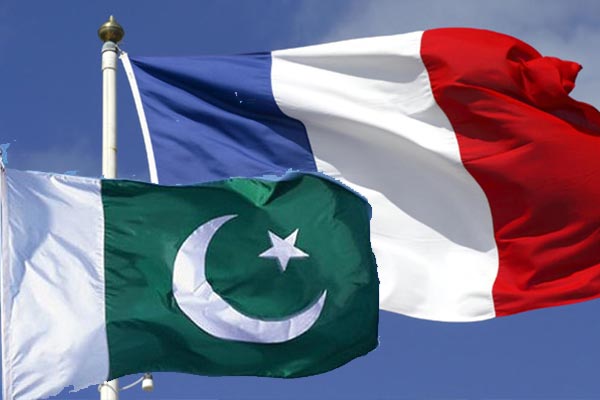 It also received briefings at French ministries of defence and foreign affairs and also visited French state Railways SNCF.    During the meetings, Senator Abdul Qayyum said Pakistan attached great importance to its relation with France being a key European country and stressed the need to further cement and expand the existing bilateral relations in the fields of commerce, trade and investments, scientific research, energy, environment, education and culture.

“We encouraged more official exchanges, ministerial visits leading to the visit of French prime minister and president to Pakistan,” he said.

He briefed his French counterparts about Pakistan’s efforts in curbing terrorism.

He said the Pakistani nation through unprecedented sacrifices had defeated the forces of terrorism and extremism, and today Pakistan was on the path of peace and development with an impressive growth rate, infrastructure development and improvement of social sector.

Senators also briefed their French counterparts about the situation in South Asia, in particular the human rights violations in the Indian occupied Kashmir.

The delegation also visited MEDEF and was received by M. Thierry Pflimlin who briefed the senators about the current state of business relations between Pakistan and France.

He said there was a renewed interest amongst French companies due to impressive economic growth and numerous investment opportunities in Pakistan.

During the meetings, both sides underlined the importance on parliamentary exchanges. It was noted that recent visits of parliamentary delegations from French to Pakistan in December last year had proved immensely beneficial to further strengthen and consolidate the existing parliamentary relations. Such visits provide a useful opportunity for better understanding of issues through open and candid dialogue.

The delegation also attended a session of the French Senate and took a deep interest in its proceedings.

Mar 02, 2021: Pakistan has improved its position on World Bank (WB) Ease of Doing Business Index for the second consecutive year, according to the annual report issued by Security and Exchange Commission of Pakistan (SECP).

As per World Bank’s latest rankings on ease of doing business for 2020, Pakistan has improved its position by 28 points from 136 to 108 which is an unprecedented improvement, report said.

Out of 6 reform areas acknowledged in 2020 report, the highest improvement of 58 points has been made in Starting a Business indicator where SECP is leading the reform process.

Pakistan’s ranking in this indicator has improved from 130 to 72 and is placed at 2nd position in South Asian countries in terms of ease of Starting a Business.

This improvement is primarily due to integration of SECP e-Services with the Federal Board of Revenue (FBR) and the Employees Old Age Benefits Institution (EOBI) at the Federal level and with Business Registration portals of Punjab and Sindh at the Provincial level.

As a result of this reform, number of procedures to start a business as recorded in the Doing Business Report 2020 have been reduced from 10 to 5 and Pakistan has been able to ranked at first in South Asia and 6th among the top ten reformers globally.

The administrative powers under the STA relating to operationalization of the STR have been entrusted to the Commission through the Financial Institutions (Secured Transactions) (Amendment) Ordinance, 2020. The SECP, with financial support from DFID (UK), has launched the STR on April 30, 2020.

The released funds include Rs310.88 billion for federal ministries, Rs137.8 billion for corporations, Rs29.3 billion for special areas, and Rs1.2 billion for the Earthquake Reconstruction and Rehabilitation Authority (ERRA), according to the latest data released by the Ministry of Planning, Development and Reform.

Likewise, Rs22.48 billion out of allocated fund of Rs29.4 billion has been disbursed to the Higher Education Commission, Rs294.5 million out of Rs350 million to the Pakistan Nuclear Regulatory Authority.

Similarly, the Revenue Division has got Rs6.46 billion, and the Cabinet Division Rs24.11 billion. Likewise, the government also released Rs18.52 billion out of PSDP allocation of Rs27.24 billion for development projects in Azad Jammu and Kashmir (AJK) and Rs 10.77 billion out of Rs. 15 billion for Gilgit Baltistan projects.

March 2, 2021: Pakistan Stock Exchange (PSX) and National Institutional Facilitation Technologies (NIFT) signed an agreement to collaborate in the development of a new payment and registration system by PSX.

PSX takes immense pride in announcing another important development for the capital market and its participants to digitally transform the Initial Public Offering (IPO) process through the E-IPO project. The E-IPO will be an automated system connecting investors and share registrars with brokers/ TRE Certificate Holders and banks through payment gateways including NIFT and the shares custodial company, CDC.

The digital portal will provide facility to investors (local, foreign, and institutional), TRE Certificate Holders, and even banks for submission of online subscription applications from anywhere in the world through the internet. The system is connected in real-time with Central Depository Company (CDC), payment gateways (e.g. NIFT and others), and shares registrars for providing end-to-end digitalization.

At the signing ceremony, Mr. Farrukh H. Khan, MD & CEO, Pakistan Stock Exchange, said, “The deployment of the new E-IPO system will open new vistas and expand the horizons for investors wanting to invest in new issuances through the convenience of a few clicks via the internet. This system will bring digitalization for investors at the front-end and will enhance the outreach of PSX, issuers and investors in terms of the IPO process as a whole. The connectivity that this system ensures between investors, share registrars, brokers, banks, gateway firms like NIFT and the shares custodians, CDC, is a great step forward for Pakistan Stock Exchange”.

Speaking at the occasion, the CEO of NIFT, Mr. Haider Wahab, said, “Pakistan is showing strong economic outlook for 2021 and beyond with positive market sentiments in the stock market, the regulator is geared up for providing state of the art digital products and services to the local investors. We are extremely excited to be part of PSX initiative to bring ease of participation in IPO digitally. NIFT ePay will help investors to make payments online for all the E-IPOs with a secure and seamless payment experience directly from their bank accounts expanding potential investors’ ability to digitally participate using NIFT ePay services”.

The E-IPO system will not only revolutionize the way investors and other market participants take part in an IPO but will also go a long way in establishing the digitalization of the IPO subscription process in Pakistan.

Dawood Hercules reports a 42% growth in earnings during...

The company saw a 10.27% improvement in net sales and a 10% increase in cost of sales, both of which resulted in a 10.9% growth in gross profit. Further relief was drawn from a 16% increase in other income and a 26.3% decline in non-core expenses.

While the company experienced a loss allowance on subsidy receivable from GoP amounting to Rs. 1.2 billion, this was somewhat compensated for by a 143% increase in share of income from associates.

DAWH also benefitted from a 39.7% decline in income tax expense.

March 2, 2021: The Oil and Gas Regulatory Authority (OGRA) has issued a price-revision notification of Liquefied Petroleum Gas (LPG) for the month of March.

According to the notification, the authority increased the locally produced LPG price by Rs.21.78 per cylinder of 11.8 kilograms.

After the revised price, the cylinder would be sold in the open market at Rs1,884.92 during the current month, which was available at 1,863.14 in the last month.

The commodity sale price per Metric Ton was Rs157,894.35 during the month of February.

Petroleum group worth USD 32.801 million exported during the month of March 2018