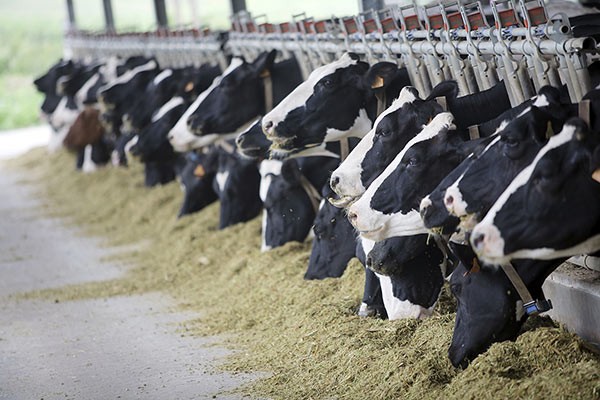 The delegation of Pakistan Dairy Association that called on Prime Minister Shahid Khaqan Abbasi at Prime Minister’s Office Islamabad on December 5, 2017 were grateful to the prime minister for awarding them and audience and listening to their challenges. They urged the prime minister to bring about key changes to ensure the industry thrives and provides much needed nutrition to the citizens of the country. Mr. Sikandar Hayat Bosan, Minister for National Food Security was also present during the meeting.

The delegation highlighted the following issues and recommendations for growth and capitalization of the potential of the sector:

After the passage of the 18th Constitutional amendment giving Provincial autonomy to the Provinces, various subjects including education, environment, health and foods standards became prerogatives of the provinces.

Provincial Food authorities were created and they have started making independent food standards which not only vary from Federal standards making body i.e. Pakistan Standards Quality Control Authority but also vary from international standards, creating serious problems related to trans provincial trade, dairy exports and complex compliance and multiple regulatory regimes, which are discouraging growth and investments in the sector

Recommendation: Harmonization of food standards at national level / Federal Level. Monitoring and implementation to be done by Provincial bodies as globally practiced.

Taxation regime: Pakistan is the 3rd largest milk producing nation globally. However, only 5% of it is processed and packed while the remainder 95% is unprocessed, unregulated and untaxed.

The zero tax rating regime was revoked in 2016 with an exemption regime coming into effect. This resultant increase in costs has widened the price gap between processed milk prices and loose milk prices has widened. This has resulted in a sharp decline of the industry as well as reversing the conversion of unprocessed milk into documented formal sector processed milk. Lower profitability and decline in volumes has severely impacted the investments in the sector and has marked the initiatives aimed in development of milk farming communities and cool chain infrastructure

Recommendation: Reinstate the zero rating regime by re-transposing milk and milk related products in the Fifth Schedule of the Sales Tax Act, 1990.

Regulatory Duty (RD) on Skimmed Milk Powder: The processed industry accounts for about 30% of powder imports, primary to manage the seasonality of milk supply as during summer milk production drops by 60-70% at farm level on account of poor fodder availability and lactating cycle. Second reason of imports of skimmed milk powder is unavailability of quality of milk powder required for specialized categories like infant milk etc.

Recommendation: Removal of RD and Excise for dairy processors

Minimum Pasteurization Law: Across the world and in developing countries milk is recognized as key source of nutrition and Governments are increasing regulation to safe guard consumer’s interest by introducing Minimum Pasteurization Law to ensure base line milk quality. Quality milk availability to the citizens of the country will mark and eventually reduce stunting and malnutrition rates amongst children. Minimum Pasteurization law will help the dairy industry to become compliant in exporting dairy products and hence boost exports.

Recommendation: Introduction of the Minimum Pasteurization Law under Federal Jurisdiction, adopted and implemented by Provinces. Business models of Turkey, Egypt, Indonesia and Vietnam are guiding models for us. The delegation was thankful to the prime minister for awarding them an audience and listening to their issues and assured them that as law abiding members of the industry, they would abide by all federal laws. The Prime Minister promised to take action to protect and promote the industry.

May 23, 2022: The dollar began the week on the back foot, following its first weekly loss in nearly two months, as investors cut bets on further dollar gains from rising U.S. rates and turned hopeful that loosening lockdowns in China can help global growth.

U.S stock market futures bounced sharply in early Asia trade and pulled the risk-sensitive Australian and New Zealand dollars along for the ride.

"We did have a sharp reversal of U.S. equity market weakness in the last hour or so on Friday, so maybe there's some momentum there," he added. "The U.S. dollar looks, for the time being, to be losing upside momentum."

"The dollar may be carving out a peak, given Europe’s resilience to the energy shock and potential easing of lockdowns in China," said Commonwealth Bank of Australia strategist Joe Capurso.

"Given the type of policy support, we expect investment to rebound faster than consumer spending," he said. "Investment is mining commodity-intensive (and therefore) very positive for commodity currencies such as the Australian dollar and Canadian dollar, in addition to the yuan."

Shanghai is edging out of lockdown and an unexpectedly big rate cut in China last week has been taken as a signal that authorities are going to provide support to the recovery.

The city of 25 million expects to lift its city-wide lockdown and return to more normal life from June 1.

The yuan had its best week since late 2020 last week and firmed to 6.6861 per dollar in offshore trade early on Monday.

The Canadian dollar rose for a third straight week last week and was a touch higher at C$1.2814 per dollar early on Monday.

Sterling leapt nearly 2% last week on the back of stronger-than-expected retail data and markets' broader re-think on whether global central banks are really lagging much behind the Federal Reserve. It was last up 0.3% at $1.2527.

Geopolitics is in focus in Asia this week as U.S. President Joe Biden tours the region, promoting greater U.S. economic engagement and seeking to push back against China's influence.

He meets Japan's Emperor on Monday ahead of talks with Prime Minister Fumio Kishida.

Australia elected a new government on Saturday, though the market reaction was muted as polls had predicted victory for the center-left Labor Party and it is not expected to shift the direction or pace of interest rate rises.

The Reserve Bank of New Zealand is expected to lift its benchmark cash rate by 50 basis points on Wednesday. U.S. Federal Reserve meeting minutes are also due on Wednesday.

May 23, 2022: Asian stocks came under pressure on Monday as persistent worries about inflation and rising interest rates dogged the global economic outlook and fresh selling in technology stocks weighed on Chinese markets.

MSCI's broadest index of Asia-Pacific shares outside Japan was flat after U.S. stocks ended the previous session with negligible gains for the day. The index is down 3.6% so far this month.

Uncertainty in market sentiment this week follows the S&P 500's meager gains on Friday of just 0.01%.

The Nasdaq declined 0.30% while the Dow Jones Industrial Average rose 0.03%.

Despite the marginal gains, the S&P 500 and the Nasdaq recorded their seventh straight week of losses, the longest losing streak since the end of the dotcom bubble in 2001.

The Dow suffered its eighth consecutive weekly decline, its longest since 1932 during the Great Depression.

Germany's producer price index for April rose 2.8% for the month, which meant annual growth was a persistently high 33.5%.

In Australia, the Labor Party ended a near 10 year rule of conservative government at a general election on the weekend

While Labor has promised climate, housing and enhanced social welfare reforms analysts do not believe the change in government will crate major implications for the nation's economy.

"In our view there was little proposed by the incoming government during the election campaign that at this stage requires us to revisit our economic forecasts," CBA economists wrote on Monday.

"Put another way, our economic forecasts and call on the RBA are unchanged despite the change of national leadership."

The concerns over global economic growth have prompted renewed support for gold.

"Gold prices saw the first weekly gain since mid-April as safe-haven demand was boosted by concerns over economic growth amid high inflation," ANZ analysts said in a research note on Monday. "A weaker U.S. dollar has also boosted investor appetite."

"The jury is still out as to whether gold has weathered the storm in the medium term, or is (it) merely rallying in response to a sustained pullback by the U.S. dollar," OANDA senior analyst Jeffrey Halley said.

The dollar index began the week on the back foot, following its first weekly loss in nearly two months, as investors cut bets on more dollar gains from rising U.S. rates and hoped that easing lockdowns in China can aid global growth.

"Before turning structurally bullish, I would need to see gold hold onto its recent gains in the face of dollar strength, and not dollar weakness," Halley said.

Bullion, seen as a safe store of value during times of economic crises, tends to become less attractive to investors when U.S. interest rates are raised because it yields no interest.

May 23, 2022: Oil prices rose in early trade on Monday with U.S. fuel demand, tight supply, and a slightly weaker U.S. dollar supporting the market, as Shanghai prepares to reopen after a two-month lockdown fuelled worries about a sharp slowdown in growth.

"Refineries are typically in ramp-up mode to feed U.S. drivers' unquenching thirst at the pump."

The U.S. peak driving season traditionally begins on Memorial Day weekend at the end of May and ends on Labour Day in September.

Analysts said despite fears about soaring fuel prices potentially denting demand, mobility data from TomTom and Google had climbed in recent weeks, showing more people were on the roads in places like the United States.

A weaker U.S. dollar also sent oil higher on Monday, as that makes crude cheaper for buyers holding other currencies.

Market gains have been capped, however, by concerns about China's efforts to crush COVID with lockdowns, even with Shanghai due to reopen on June 1.

Lockdowns in China, the world's top oil importer, have hammered industrial output and construction, prompting moves to prop up the economy, including a bigger-than-expected mortgage rate cut last Friday.

The European Union's inability to reach a final agreement on banning Russian oil for its invasion of Ukraine, which Moscow calls a "special operation", has also stopped oil prices from climbing much higher.

May 23, 2022: Malaysian palm oil futures gained on Monday as higher rival oil prices supported the market, with traders assessing the impact of Indonesia's move to reinstate a domestic sales policy.

The benchmark palm oil contract FCPOc3 for August delivery on the Bursa Malaysia Derivatives Exchange gained 58 ringgit, or 0.95%, to 6,167 ringgit ($1,405.10) a tonne during early trade.

Indonesia will reimpose a domestic sales requirement on palm oil, the government said last week after the world's biggest producer of the key edible oil reversed a ban on its exports.

Indonesia's resumption of exports will not blunt Malaysia's competitiveness in exporting the edible oil, the Malaysian commodities minister said on Sunday, pointing to the rival's loss of sales in India.

Exports from Malaysia during May 1-20 rose between 28% and 32.6% from the same week in April, cargo surveyors said last week.

Dalian's most-active soyoil contract DBYcv1 rose 1.2%, while its palm oil contract DCPcv1 gained 1.8%. Soyoil prices on the Chicago Board of Trade BOcv1 were up 0.2%.

Palm oil is affected by price movements in related oils as they compete for a share in the global vegetable oils market.

Palm oil may retest a resistance at 6,354 ringgit per tonne, as the bounce from the May 20 low of 5,925 ringgit looks incomplete, Reuters technical analyst Wang Tao said.