September 28, 2021 (MLN): Oil and Gas Development Company Limited (OGDCL) is the largest E&P Company in Pakistan with a diversified production base, where 70% of oil
and gas production emanating from 6 and 3 fields, respectively, as opposed to a more concentrated production base of other players.

The Company contributes around half of the crude oil and over a quarter of natural gas production towards the total domestic output.

The company recently disclosed its financial performance for FY21, where the company managed to earn a profit after tax of Rs91.53bn which was slightly 9% YoY lower than the net profits of Rs100.9bn reported in the last fiscal year. The company was unable to demonstrate the growth in net profits despite the modest surge in international oil prices along with PKR depreciation against the USD.

Alongside financial results, the company also announced a cash dividend of Rs6.9 per share i.e., 69% for FY21.

Looking at the company’s financial performance, despite the global economic recovery and uptick in demand for oil & gas, the oil and gas E&P giant saw its revenues grow by a slight 2.6% YoY to Rs239bn in FY21. The increase in revenues has come largely from a surge in oil prices by 3% YoY and an increase in oil production by 2% YoY. However, a dip in gas production by 4% YoY kept the company’s revenues in check.  To note, Arab Light, WTI and Brent avg. prices during FY21 stood at USD 53.6/bbl, USD 52.2/bbl, and USD 54.9/bbl, respectively.

The expense side also played a key role in declining the earnings for OGDCL. Where the operating expenses that account for over 26% of net sales jumped by Rs4.8bn or 7.4% YoY to Rs70bn mainly on account of salaries, wages and benefits and workover charges. while transportation charges soared by 10.4% YoY to Rs1.75bn. However, a decline in general and administrative expenses, finance cost and workers’ profit participation fund by 8%, 26.79% and 10.6% YoY respectively provided some respite to the company’s earnings.

Looking at the last 10 years particularly, the company has mostly seen a growing topline, except for FY15, FY16 and FY20, when it contracted by 18%, 23% and 11% respectively. Gross Profit margins show a mixed trend. After reaching a peak in FY13, profit margin followed a downward trend and reached its lowest in FY17, since then it started to grow gradually. 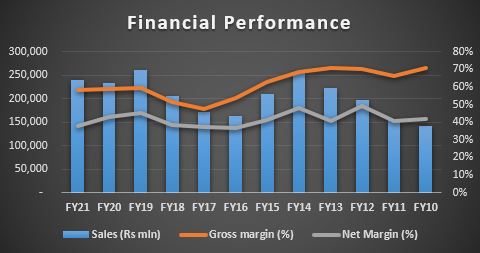 On the exploration front, OGDC has been aggressive and has been the most active covering 45% of the total area under exploration, comprising of 50 owned and JV exploration licenses and working interest in 8 non-operated blocks. During FY21, the exploration and prospecting expenditures of the company came down by 4.6% YoY mainly due to smaller exploration activities and lower dry wells incurred versus last year.

Looking at the Company’s exploration history, OGDC has not made sizeable discoveries recently compared to the past discoveries like Qadirpur, Nashpa, Kunar and Pasakhi wells. However, OGDC has spent around Rs75Bn over FY10 – 9MFY21 (excluding the cost of dry wells) for geological and prospecting expenditure, drilling 134 exploratory wells in this period, a report by Taurus Securities cited.

Going by the report, OGDC has reported 48 new oil and gas discoveries since FY10, along with 6 new discoveries in the outgoing fiscal year. The earnings impact of discoveries during FY21 is estimated to be Rs0.60/share. The reported discoveries have an expected cumulative daily production of 18 MMSCF of gas and 849 bbl. of oil, respectively, with estimated reserves of 10.32 MMBOE.

Moreover, recent gas and condensate discovery in Wali block, KPK is likely to be a sizeable discovery with expected oil and gas flows of 11.8 MMSCFD and 945 bpd, respectively. The estimated EPS impact of this discovery alone is Rs0.55/sh, it added.

The Other income of the company went down by 59% YoY to Rs13.979mn mainly due to a fall in interest income from cash and cash balances. On the taxation front, the effective tax rate came in at 29% compared to 30% in FY20.

Overall, the result is broadly in line with market expectations. According to Intermarket Securities, the lower–than–expected payout points to cash–flow constraints, even though circular debt build-up has significantly slowed and other Energy sector companies improved their payouts in 4QFY21 results. One plausible reason could be commitments for exploration, including investment in the recently acquired exploratory block in Abu Dhabi.

Lucky Cement to increase cement prices by Rs30 per bag

Rebutting the claim that talks with IMF have stalled, the Finance Division issued a statement saying the negotiations are moving forward.

During the early part of the week, investors resorted to panic selling mainly on the decision on waiving off the 10-Year tax holiday on refineries along with the hike in electricity prices by Rs1.68/unit. Furthermore, lack of clarity on the continuation of the IMF package as well as delay in the process to appoint a new Director-General of the ISI (DG ISI) also caused the KSE100 index to mark an intra-week low of 43,042 index level.

However, with Finance Minister assuring that the government would soon address concerns of the global lender and resume the IMF’s EFF, as well as PM’s statement allaying any rumours of a military-political divide, and the likelihood of civil-military leadership reaching consensus over the appointment of new ISI chief, the KSE-100 index posted two swift back-to-back bull runs, a report by Arif Habib Limited highlighted.

From a sector-specific lens, Commercial Banks emerged as the outperformers during the week amid the increased likelihood of further rate hikes in the upcoming MPS, adding 393 points to the index during the week, followed by Oil & Gas Exploration Companies (136 pts), Cement (98 pts), Fertilizer (90 pts) and Pharmaceuticals (28 pts).

The positive contribution from Cement is attributable likely hike in Cement prices of PKR25-PKR30/bag in the midst of historical high international coal prices.

Meanwhile, the KSE All Share Market Cap increased by a Rs8.66billion or 0.11% over the week, being recorded at Rs7.79trillion as compared to a Market Cap of Rs7.78tr recorded last week.

On the local side, major buying was reported by Insurance Companies ($12.2mn) followed by Mutual Funds ($3.4mn), and Other Organizations ($2.53mn). Other significant transactions included $3.35mn and $3.27mn worth of stocks sold by local Companies and Individuals respectively.

October 17, 2021 (MLN): The highlights of the important economic and business events that took place during the last week are in order so as to become acquainted with the recent developments in Pakistan’s economic and public policy.

October 17, 2021 (MLN): The highlights of the important economic and business events that took place during the last week are in order so as to become acquainted with the recent developments in Pakistan’s economic and public policy.

Lucky Cement to increase cement prices by Rs30 per...

October 17, 2021: Lucky Cement Limited (PSX: LUCK), Pakistan’s leading cement manufacturer and exporter has notified recently that the company is up to increase the price of cement by Rs30 per bag.

The increasing trend of coal prices internationally combined with escalating dollar rates, fuel, electricity charges, and transportation costs have resulted in increasing the production cost of cement by a considerable margin.

Accordingly, the management at Lucky Cement Limited is prompted to increase the price for all institutional customers by increasing Rs600 per ton (Rs30 per bag) on offered price.

The new prices will be effective from Monday, October 18, 2021, as per notification issued by the company.