November 18, 2021 (MLN): After a move to squeeze Rs170bn money supply in the economy by increasing CRR by 100bps to 6%, SBP is likely to increase policy rate at a much higher magnitude of 100 bps or above, in the upcoming MPC meeting, which will be the highest in almost 2.3 years.

This will also bring the real interest rates close to zero, after having stayed in the negative territory for over a year as the country combatted the economic shocks resulting from the pandemic outbreak.

The State Bank of Pakistan (SBP) on Tuesday preponed the upcoming Monetary Policy Statement (MPS) announcement, by a week, to Nov 19 2021, amid recent unforeseen developments that have affected the outlook for inflation and the balance of payments, and to help reduce the uncertainty about monetary settings prevailing in the market.

Since there were already a lot of speculations going on regarding an increase in policy rates as many market experts believed that it was a part of the IMF program, thus, bringing forward of the MPS indicates that SBP wants to clear speculations and give a signal to the IMF that will set grounds for a revival in $6.0bn support program.

To recall, at its meeting in September, the State Bank raised its benchmark interest rate by 25 bps to 7.25%, the first move it had made since slashing borrowing costs last year, and indicated that it could lift rates further in future. In its last forward guidance SBP stated that in the absence of unforeseen circumstances, the MPC expects monetary policy to remain accommodative in the near term, with gradually tapering the significant monetary stimulus provided over the last 18 months.

This is the signal that in the upcoming MPC meeting a more aggressive stance from the earlier gradual and calibrated likely to be witnessed as inflation fears are echoing more clearly than before. Inflation in Pakistan has increased notably with the resumption of economic activity and peaked at 9.19% YoY in Oct’21 caused by skyrocketing energy and food prices along with PKR depreciation. The average inflation during 4MFY21 remained low at 8.7% YoY compared to 8.9% recorded in 4MFY21. However, with the fading base effect, it has started accelerating concerns.

Moreover, on the external front, the trade balance remained in the deficit of $15.6bn in the first four months of FY22 due to a jump in the overall import of goods. This increase in trade deficit caused by rising imports too is fueling the domestic inflation level due to the impact of imported inflation. The weekly SPI data suggests that inflation will likely reach double-digits in November '21 due to the rise in food and fuel prices along with upward revisions in electricity tariff.

Besides mounting inflationary pressure, rising secondary market yields is also hinting towards an aggressive rate hike as the cut-off yield on the 3M T-bill has gone up by around 126 bps to 8.5% since September’21 (when the last monetary policy was announced). The yields on 6M papers currently stands at 8.97% as of Nov 16, 2021, near to the recent broad inflation print of 9.2% for Oct’21.  This suggests that prospects regarding aggressive rate hike have pushed short-term yields much higher in the secondary market. 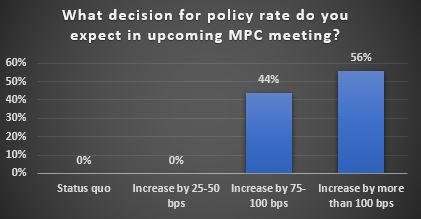 Muhammad Saeed Khalid, analyst at Shajar Capital said “MPC may remain introvert as it has already raised CRR by 1% each for daily basis and fortnightly basis. This may likely restrain MPC to hike policy rate not more than 75bps in Nov’21.”

Furthermore, by end of FY22, 89% of the respondents anticipate the policy rate to be increased by more than 150 bps while only 11% of the participants foresee it to increase by 150 bps during FY22. 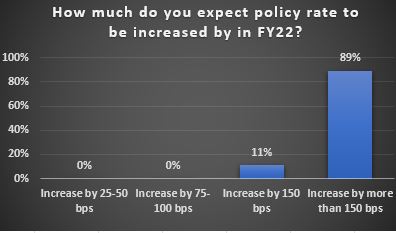 With regards to inflation, survey results showed that about 78% of the participants believe headline inflation during FY22 will average higher than 9% while 22% expect average inflation will remain within the range of 8% -9%. 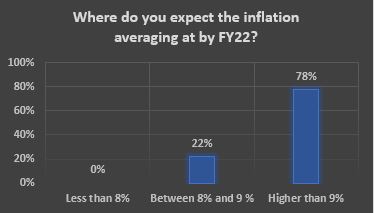 On the exchange rate front, the PKR is continuously showing a declining trend against the USD and is expected to remain under pressure amid ambiguity on Saudi Package and IMF-talk along with strong demand from imports despite increase in remittances. Pak Rupee depreciated by 11% during FY22TD and devalued by 4% since the last MPS. 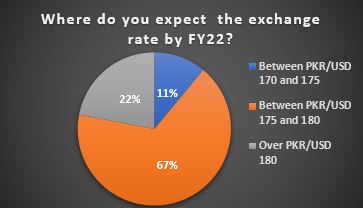