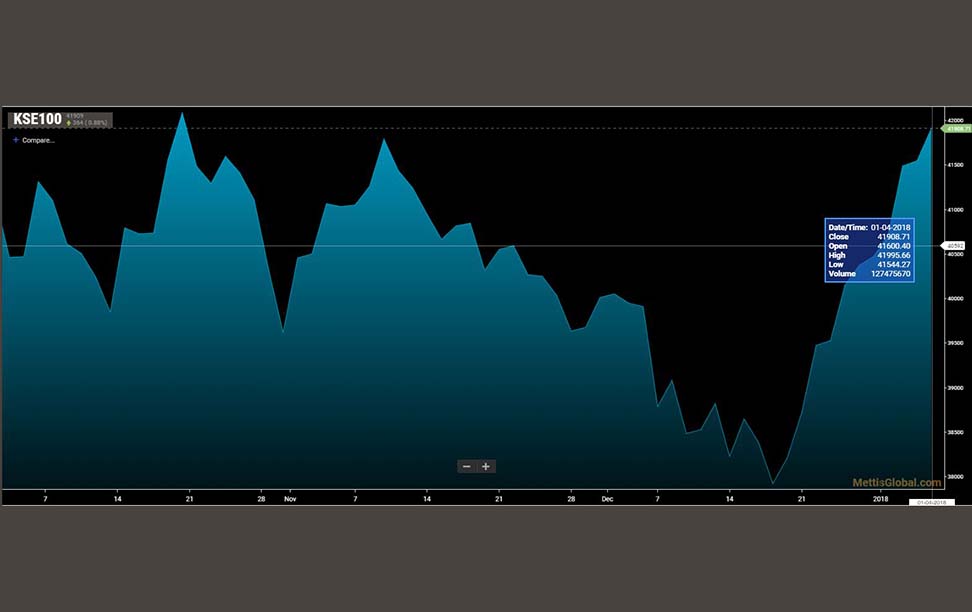 KSE – 100 extended again today after giving a relatively mute performance yesterday. The week’s positive sentiment has had local investors participate in the index off late. KSE All Share Index Volume reached 222 million shares increasing the value traded to reach 8.56 billion during the day.

In the company news today, Mughal Iron Steel announced today that they have gained approval from the Lahore Electric Supply Company to expand their existing 19.99 MW Grid Station Load to 59.99MW. The move would help the company achieve power independence allowing to run the operations smoothly for future production.

Oil prices remained stable today after reaching the 2 ½ year highs on the back OPEC led cuts and the ongoing demand surge across the world. Furthermore, Cement sector has witnessed a sales boom for the last four years, more so this fiscal as total dispatches reached 22.243 million tons in July-December 2017 against 19.806 million tons during corresponding period of last fiscal.

The index movement was limited within the 451.39 points range.

52 companies closed up, whereas 32 were down at the day end.

KAPCO’s earnings jump by 80% during FY20 despite lower revenues

Bank Islami witnesses 296% increases in half yearly profits, in the wake of increased...

Pakistan Railways be given precedence in Pakistan’s economy