May 26, 2022 (MLN): In a week-long consultation between Pakistan's team led by Finance Minister Mr. Miftah Ismail and IMF Mission at Doha on the seventh review, the multilateral lender has expressed concern about the fiscal and current account situation arising from government's actions especially electricity and fuel subsidies and other slippages, a press release issued by Finance Ministry said today.

The meetings identified areas of divergence and corrections required in the current account and fiscal deficit.

Mr. Nathan Porter, IMF's Mission Chief, also issued a statement at the conclusion of the meetings that says: “The mission has held highly constructive discussions with the Pakistani authorities aimed at reaching an agreement on policies and reforms that would lead to the conclusion of the pending seventh review of the authorities’ reform program, which is supported by an IMF Extended Fund Facility arrangement.”

Considerable progress was made during the mission, including the need to continue to address high inflation and the elevated fiscal and current account deficits, while ensuring adequate protection for the most vulnerable.

“In this regard, the further increase in policy rates implemented on May 23 was a welcome step. On the fiscal side, there have been deviations from the policies agreed in the last review, partly reflecting the fuel and power subsidies announced by the authorities in February,” the statement added.

The IMF team emphasized the importance of rolling back fuel and power subsidies, which were given by the previous administration in contravention of its own agreement with the Fund. The government is committed to reducing the overall budget deficit in FY23, the ministry said.

Speaking of talks with IMF, finance minister who just returned from Doha, said, “Our delegation had very useful and constructive discussions with the IMF team over the last week. We discussed significant slippages in FY22, caused in part by the fuel subsidies given in February 2022.” 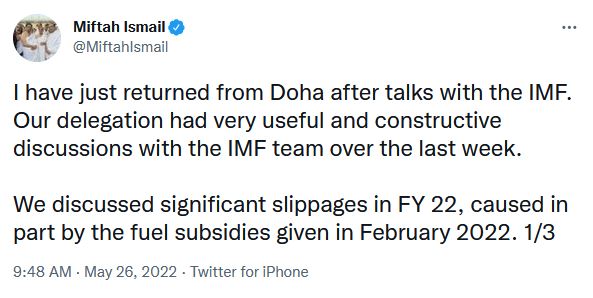 “We discussed targets for FY23, where, in light of high inflation, declining forex reserves and a large current account deficit, we would need to have a tight monetary policy and consolidate our fiscal position. Thus govt is committed to reducing the budget deficit in FY23,” he added.