Computer industry is the future of Pakistan, says Haroon Akhtar 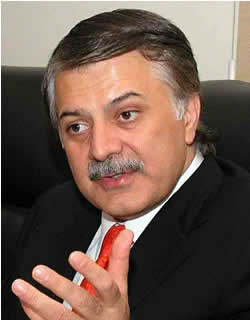 Special Assistant to the Prime Minister on Revenue Mr. Haroon Akhtar Khan has said the government is ready to incentivize the local computer industry in view of the growing demand and use of computers, laptops and notebooks in the country.

“The computer industry is the future of Pakistan and the government is committed to providing it all possible incentives so that every person in the country can afford to buy a computer at affordable rates,” he said while talking to a delegation of All Pakistan Computer Association at the FBR House here. Association's Chairman and founder Munawar Iqbal led the visiting delegation while senior Members of the FBR were also present.

The delegation briefed the Special Assistant to the Prime Minister on the current state of local computer industry and expressed their satisfaction with what they described as an end to the smuggling of computer parts in the country. They also appreciated the government's initiatives of  slashing half of the withholding tax on e-commerce and the permission for opening of dollar accounts in the country.

The delegation submitted that while the government had always extended its support to the local computer industry, there was a need for more incentives and policy measures so that the local industry and local assembling of computers could flourish and boost its contribution to the national economy.

Haroon Akhtar Khan assured the delegation the government would welcome any proposals by the Computer Association to boost their industry, and called for preparation and submission of a set of realistic and workable proposals within the next couple of months so that the same could be deliberated upon before being made part of the federal budget. “We want to protect and promote the local industry so that the import bill on the purchase of computers can come down and the local industry can also enjoy a competitive edge vis-a-vis multinational companies currently supplying computer machines and spare parts in the market,” he said