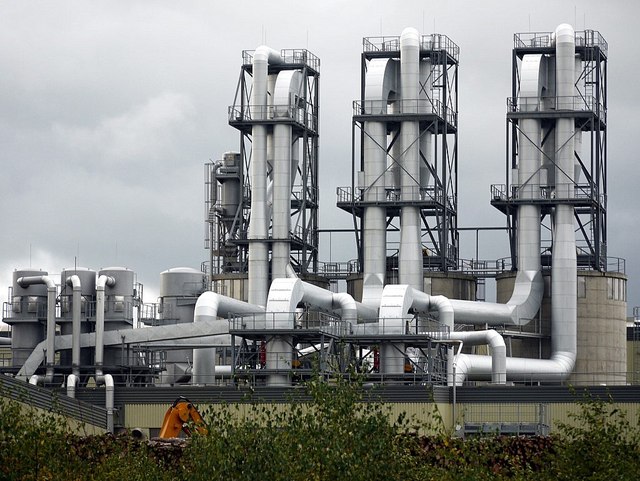 Oct 01, 2019: Wall Street stocks tumbled Tuesday as a dismal report on manufacturing exacerbated fears that the slowing US economy could tip into recession.

Stocks had opened the session higher but fell sharply after the Institute for Supply Management rated US manufacturing activity at its weakest level since the Great Recession.

“There's a growing recognition that the spread of negative economic impulses around the world is starting to land on US shores in a meaningful way.”

The ISM's index fell 1.3 points to 47.8 percent in September, the lowest since June 2009 and well below the 50 rating that separates growth from contraction.

The institute pointed to trade conflicts as the biggest factor.

“Global trade remains the most significant issue, as demonstrated by the contraction in new export orders that began in July 2019,” Timothy Fiore, chair of ISM's manufacturing survey, said in a statement. “Overall, sentiment this month remains cautious regarding near-term growth.”

Analysts have pointed to upcoming trade talks between Beijing and Washington as critical to the market's fortunes in the coming period.

Other key potential catalysts include the third-quarter corporate earnings period and upcoming Federal Reserve meetings that could lead to lower interest rates.

The company announced it will furlough 6,000 workers in Mexico due to the strike, while JPMorgan Chase estimated the strike has cost the company around $1 billion so far.

McDonald's fell 2.6 percent following a downcast note from JPMorgan, which said the company's sales are trending below expectations.

February 25, 2020: The Cabinet Committee on Privatization (CCOP) was briefed here Tuesday that the privatization process of SME Bank Limited and Pak Reinsurance Co. Ltd (up to 20% divestment) was moving ahead in a relatively faster manner and was expected to be completed in the required time frame.

The CCOP meeting, which was chaired by Adviser to the Prime Minister on Finance and Revenue Dr. Abdul Hafeez Shaikh, was given an update on the privatization program, according to press statement issued by the Ministry.

On the revival status of Pakistan Steel Mills, the committee directed the Privatization Commission to complete all the standard requirements in a regular but expeditious manner, the statement said and directed it to keep on updating the government on any issues that might surface during the smooth running of the process.

On the proposal of the Privatization of the Guddu Power Plant (747 MW), the Ministry of Privatization informed the committee that it had received EoIs from Financial Advisers and parties had been shortlisted for issuance of request for proposals.

Other issues related to the transaction were also discussed and the CCOP directed that there was a need for further discussion on the project between NEPRA, Power Division and Ministries of Finance and Privatization.

They were directed to come up with a joint proposal in the next meeting of CCOP for moving ahead in the transaction so that it might complete within the given time frame.

For divesting shares of OGDCL, CCOP directed that the matter required further deliberation.

The committee directed that all the relevant stakeholders including the Ministry of Energy to come up with a presentation on the proposal in the next meeting.

The Chair directed that all the processes related to the privatization process may be carried out in a transparent but expeditious manner so that all the targets are achieved within the given time frame.

February 25, 2020 (MLN): Pakistani rupee (PKR) depreciated by 4 paisa against US Dollar (USD) in today's interbank session as the currency closed the day's trade at PKR 154.26 per USD, against yesterday's closing of PKR 154.21 per USD.

The rupee endured a relatively dull trading session with very little intraday movement, trading in a range of 9 paisa per USD showing an intraday high bid of 154.28 and an intraday Low offer of 154.22.

Meanwhile, the currency lost 92 paisa to the Pound Sterling as the day's closing quote stood at PKR 200.19 per GBP, while the previous session closed at PKR 199.28 per GBP.

Similarly, PKR's value weakened by 44 paisa against EUR which closed at PKR 167.49 at the interbank today.

Hi-Tech Lubricants gets OGRA’s permission to set up 35...

February 25, 2020 (MLN): The Oil and Gas Regulatory Authority (OGRA) has granted permission to Hi-Tech Lubricants Limited to proceed to Apply/Acquire No Objection Certificates (NOCs) from concerned departments for setting up of up to a maximum number of 35 Retail Outlets in the KPK Province.

The approval has been granted with instructions that Retail Sales through Petrol Pumps can only be started after completion of necessary Storage Infrastructure, third party Inspector Report confirming that the Storage/Depots at Nowshera meets the OGRA’s notified technical standards.

The above information was disseminated by the company via notification to Exchange.

MoU with KSA in offing to formalize manpower export:...

February 25, 2020: Pakistan is planning to sign a Memorandum of Understanding (MoU) with Kingdom of Saudi Arabia (KSA) to formalize export of its manpower which envisaged the gulf state as a prospective employment destination.

“The MoU is likely to be signed during the forthcoming visit of Prime Minister Imran Khan to Saudi Arabia,” a senior officer in the ministry of Overseas Pakistanis and Human Resource Development (OP&HRD) told APP on Tuesday.

After the signing of MoU, Pakistani emigrants choosing Saudi Arabia as a potential destination for employment would start getting Standardized Labour Contract (SLC) from their employers.

He said the agreement, once signed, would help evolve a mechanism for early dispute resolution between Pakistani labourers and their foreign employers.

It would also help both countries in exploring new avenues in the field of the workforce.

To a query, he said Pakistan’s manpower export through ‘Musaned’, a digital platform launched by the Kingdom to facilitate the labour recruitment process and ensure the protection of workers’ rights, would also become possible after signing of this agreement.