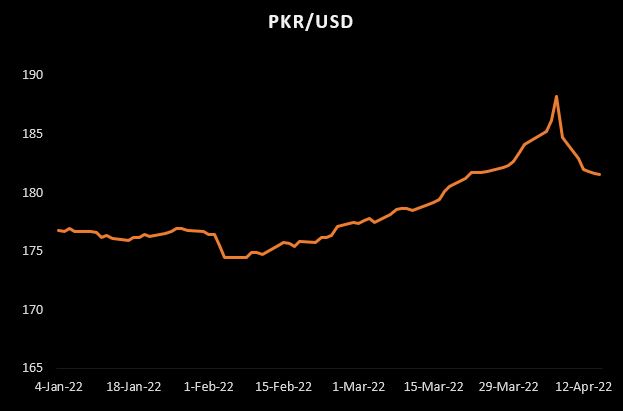 April 15, 2022 (MLN): While responding to the clarity on the political landscape and bold measures of monetary tightening by SBP, the Pakistani rupee (PKR) witnessed a phase of smart recovery against the US dollar in the interbank market as the local unit has settled at PKR 181.58 on Friday, observing a notable gain of 6.59 rupees during six sessions.

However, PKR observed a gain of only 10 pasia at the end of today's session on the back of depleting foreign exchange reserves.

Throughout the day, the rupee endured a volatile trading session with quotes being recorded in a range of 1.1 rupees per USD showing an intraday high bid of 182.60 and an intraday low offer of 181.60.

To recall, Pakistan's lower house of parliament ousted Imran Khan from the premiership in a no-confidence vote in the early hours of Sunday, following which PML-N President Shahbaz Sharif was elected as the new prime minister in National Assembly’s session on Monday.

Meanwhile, massive monetary tightening by the central bank to counter the external shocks and inflationary pressures has also supported the rupee from further fall.

In addition, the capped demand for dollars from importers as they were waiting for some more correction on the political front.

In an interview with Bloomberg during the outgoing week, the Governor State Bank of Pakistan (SBP) Reza Baqir said that Pakistan is working to draw a $3 billion balance from the International Monetary Fund (IMF).

However, Pakistan will have to pay $2.5bn on account of external debt servicing in the last quarter of FY22. These payments are likely to put pressure on PKR against the greenback in the coming days.

On the other hand, the currency experts believe that the domestic unit is undervalued while the dollar is overvalued due to its demand.

Shaukat Tarin, the former Finance Minister in his latest press conference stated the same that PKR is undervalued. The statement was later supported by former FM Ishaq Dar who said that PKR can strengthen to 160 per USD if the economy is steered in the right direction.

From July’21 to date, the local unit has lost Rs24.03 against the USD. Similarly, the rupee fell by Rs4.8 in CY22 with the month-to-date (MTD) position showing an up of 1.03%, as per data compiled by Mettis Global.

On another note, within the money market, the State Bank of Pakistan (SBP) conducted an Open Market Operation (OMO) in which it injected Rs3.169 trillion into the market for seven days at 12.29%.