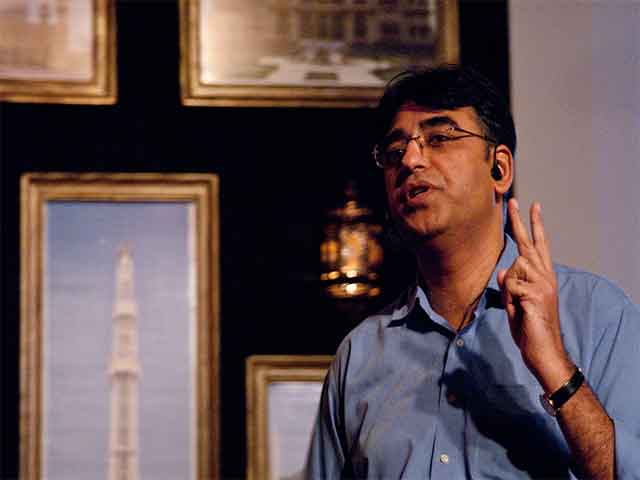 December 02, 2021: Pakistan offered the Chinese investors huge opportunities to develop a deeper understanding of the investment opportunities in the textile sector, Minister for Planning, Development, and Special Initiatives Asad Umar said on Wednesday during a meeting with the China Chamber of Commerce for Import and Export of Textiles and leading Chinese textile companies and investors.

“Pakistan wishes to have win-win cooperation with the Chinese investors”, he added.

Special Assistant to the Prime Minister on CPEC Affairs Khalid Mansoor, and some textile investors in Pakistan participated in the event organized by the China Pakistan Economic Corridor (CPEC) Authority.

Asad Umar stated that the event had been organized to highlight to the Chinese investors, the comparative advantage of Pakistan in the textile sector.

Khalid Mansoor briefed the participants on the measures being taken by the government to facilitate the investors.

He said that the legal framework was being further improved to make it easier for investors to start and run their operations.

Highlighting the importance of industrial cooperation, he noted that this segment of CPEC holds great potential and significant work was underway to make full use of it.

A detailed presentation on the textile sector of Pakistan was given to Chinese entrepreneurs and investors wherein various aspects of comparative advantages of Pakistan were explained in detail.

The presentation included comparative data of the region for transportation, labor, utilities, and other costs for the investors. It also highlighted the favorable market access situation for the country’s products in foreign markets.

The facilities and incentives available to investors in CPEC SEZs were also discussed in detail.

The Chairman of the Chinese Chamber greatly appreciated the online exchange and said that it was very informative for the participants. He said that investors’ visits would be arranged as soon as the travel restrictions are phased out.

The embassy of China in Islamabad and Pakistan’s Embassy in Beijing also joined the session. Meanwhile, representatives of a number of large Chinese textile companies participated in the session.

An official source told APP here on Sunday that the decision has been taken for the interest of overseas job seekers to reduce the load of unemployment in the country.

To a question, he said that job seekers could easily search details of overseas job opportunities with Licensed Overseas Employment Promoters as some mafias were looting the innocent youth in the name of jobs in foreign countries.

He said recently, the Ambassador of Kuwait had held a meeting with Advisor to the Prime Minister on OP&HRD Muhammad Ayub Afridi and discussed bilateral relations and matters of mutual interests.

The Advisor has appreciated the step of the Kuwaiti government for opening work visas for Pakistanis. He asked the Ambassador to enhance the job quota for Pakistanis youth as Pakistan has potential manpower to meet Kuwaiti market requirements.

They reiterated for close coordination between a relevant official of both countries regarding data sharing of migrant workers in order to ensure the protection of their rights.

January 17, 2022: Oil prices rose on Monday, with Brent crude futures at their highest in more than three years, as investors bet supply will remain tight amid restrained output by major producers with global demand unperturbed by the Omicron coronavirus variant.

The gains followed a rally last week when Brent rose 5.4% and WTI climbed 6.3%.

Frantic oil buying, driven by supply outages and signs the Omicron variant won't be as disruptive as feared for fuel demand, has pushed some crude grades to multi-year highs, suggesting the rally in Brent futures could be sustained a while longer, traders said.

"If (investment) funds increase allocation weight for crude, prices could reach their highs of 2014," he said.

The Organization of the Petroleum Exporting Countries (OPEC) and its allies - OPEC+ - are gradually relaxing output cuts implemented when demand collapsed in 2020.

But many smaller producers can't raise supply and others have been wary of pumping too much oil in case of renewed COVID-19 setbacks.

Worries of a Russian attack on neighbouring Ukraine that could disrupt energy supply also lent support to prices.

U.S. officials voiced fears on Friday that Russia was preparing to attack Ukraine if diplomacy failed. Russia, which has massed 100,000 troops on Ukraine's border, released pictures of its forces on the move.

U.S. crude oil stockpiles, meanwhile, fell more than expected to their lowest levels since October 2018, but gasoline inventories surged due to weak demand, the Energy Information Administration said on Wednesday.

Sources told Reuters China plans to release oil reserves around the Lunar New Year holidays between Jan. 31 and Feb. 6 as part of a plan coordinated by the United States with other major consumers to reduce global prices.

Telenor to divest stake in Myanmar’s Wave Money to...

January 17, 2022: Norwegian telecom firm Telenor has agreed to sell its 51% stake in Myanmar's Wave Money, a digital payment service provider, for $53 million to a subsidiary of Yoma Strategic, the companies said in a joint statement on Monday.

The subsidiary, Yoma MFS Holdings Pte Ltd, is to be funded by a consortium of investors led by Singapore-listed Yoma Strategic, the companies said.

The sale price values Wave Money at about $104 million. That compares with a valuation of about $150 million in mid-2020 when the companies had first signed a deal for Telenor to divest its stake for $76.5 million.

Yoma said the new deal took into account factors including the economic and business developments in Myanmar since the previous announcements and potential synergies for Wave Money to collaborate with the company's other businesses.

Telenor wrote off the value of its Myanmar operations last year following a military coup in February, and in July agreed to sell its telecoms business in the Southeast Asian nation to Lebanese investment firm M1 Group for $105 million https://www.reuters.com/business/media-telecom/telenor-sells-myanmar-operations-m1-group-105-mln-2021-07-08. That deal is still awaiting approval from Myanmar authorities.

Wave Money was launched in November 2016 as a joint venture between Telenor and Yoma Bank, which is part of First Myanmar Investment (FMI). FMI and Yoma Strategic are part of tycoon Serge Pun's Yoma Group.

In 2020, Wave Money processed $8.7 billion in remittance and payments. The business has seen a significant recovery in volumes since June 2021 with the trend expected to continue, the companies said in a statement.

According to Commissioner, Rawalpindi Division, Gulzar Hussain Shah, all-out efforts would be made, utilizing all available resources to complete the project within shortest possible time frame.

All the preparations to start the construction work of the project were in full swing which were being completed on fast track policy, he added.

He said the land acquisition process for Lai Expressway & Flood Channel project worth Rs 24,960.70 million had almost been completed.

The Revenue Department and the Land Directorate of the Rawalpindi Development Authority were also working on this project, he said adding, the Lai Expressway project would be completed under public-private partnership.

He informed that senior officers of RDA worked day and night to complete PC-I to acquire land for Leh Expressway till Oct 14, last year.

China coal output hits record in Dec and in...

January 17, 2022: China's coal output hit record highs in December and in the full year of 2021, as the government continued to encourage miners to ramp up production to ensure sufficient energy supplies in the winter heating season.

China, the world's biggest coal miner and consumer-produced 384.67 million tonnes of fossil fuel last month, up 7.2% year-on-year, data from the National Bureau of Statistics showed on Monday. This compared with a previous record of 370.84 million tonnes set in November.

Since October, authorities have ordered coal miners to run at maximum capacity to tame red-hot coal prices and prevent a recurrence of September's nationwide power crunch that disrupted industrial operations and added to factory gate inflation.

The most-active thermal coal futures contract on the Zhengzhou Commodity Exchange, for May delivery, was up 2.82% at 708 yuan per tonne at 0239 GMT on Monday. Prices have more than halved since hitting record highs in October last year.

Coal traders in China shrugged off an Indonesian coal export ban as stockpiles at power plants were strong and power demand was set to weaken for the upcoming Lunar New Year holidays.

Coal supply was guaranteed, the state planner has said, even as coal inventories were "slightly fluctuating" from a record high of 168 million tonnes struck on Dec. 22, it added. They remained above 160 million tonnes, exceeding levels in the prior year.