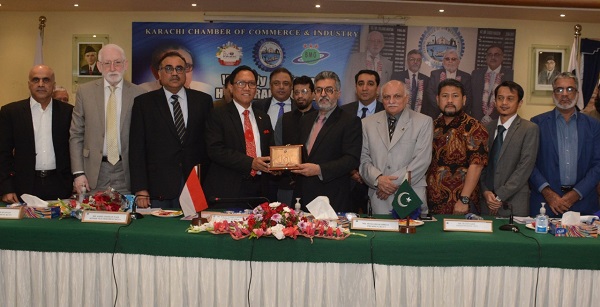 November 16, 2021: Consul General of Indonesia Dr. Jun Kuncoro Hadiningrat has said that Indonesia wants to further develop trade and economic relations with Pakistan by boosting cooperation between the business communities and encouraging linkages between the youth of both the brotherly countries.

Exchanging views at a meeting during his visit to the Karachi Chamber of Commerce & Industry (KCCI), the Indonesia CG said that Indonesia was also keen to promote cooperation in the IT sector hence, a webinar titled “Indonesia-Pakistan IT Updates – The Development and Challenges” was organized recently under the auspices of Indonesian Consulate which was a big breakthrough in which the IT experts from both sides stressed the need to promote digital economy between the two countries.

Indonesian Consul General stated that Free Trade Agreement (FTA) between Indonesia and Pakistan when materialized will certainly be a great initiative and advised the business community of KCCI to enlist the products that have the potential to increase the bilateral trade.

The Indonesian CG also highlighted the importance of education cooperation as one of the instruments in promoting bilateral relations between Indonesia and Pakistan, especially in terms of people-to-people contact so that they could understand each other’s culture.

He was of the opinion that cooperation between Indonesian and Pakistani universities will pave the way for more inclusive bilateral relations in the academia and education sectors of both countries. “We need to promote interaction between the younger generation of both countries as they don’t know much about each other”, he said and appealed KCCI to look into the possibility of promoting such interactions as well.

He said that Indonesia lays special emphasis on improving trade and investment ties with the business community of Karachi keeping in view the huge contribution to the national exchequer and the key role being played by this city in the economic development of Pakistan.

Earlier President KCCI Muhammad Idrees, while welcoming the Indonesian CG, pointed out that the bilateral trade was in favor of Indonesia during 2020, Pakistan exported goods worth $195 million while the imports increased to $2.4 billion, indicating a trade balance of $2.2 billion in favor of Indonesia. “We have no problem with this as Indonesia is our brotherly country but I believe that effective strategies and practical steps have to be taken by both sides to make trade balanced”, he added.

He also noted that Indonesia intends to invest in power projects and oil and gas exploration as well which will facilitate Pakistan to learn from Indonesian expertise in producing electricity through coal. “We firmly believe that Indonesia along with the ASEAN countries is a huge market with great potential for Pakistani products and the businessmen should focus on these countries to enhance trade and exports”, he said, adding that CPEC can also attract foreign investment and all regional countries including Indonesia would certainly benefit from this promising project.