December 30, 2021 (MLN): Inflation- the silent wealth killer has been brutally slashing the purchasing power of Pakistanis no matter what their income class is. The more efforts economic managers are putting to find a way out for the economy from the inflation clutch, the more it sinks deeper.

The excitement to know about the upcoming Consumer Price Index (CPI) numbers for the month of December has been wearing off in the market since the reality is known and experienced by everyone. However, we have made our estimations, and unsurprisingly, the numbers not only would be in double digits but the magnitude is also going to be expanded.

This would bring 1HFY22 average inflation to 9.8% as against 8.86% YoY in the corresponding period last year.

On a sequential basis, the CPI would likely surge by 0.2% compared to the 2.98% MoM increase in the month of November’21 in line with the expectation put forth by the Ministry of Finance that states, “Inflation will soften in December’21.”

However, YoY inflation is expected to remain double-digit in December but slightly less than last month’s number, it added.

This increase in inflation is mainly derived from electricity charges, fuel, house rent, transport, and non-perishable food items among the largest contributors. The price adjustments were directly and indirectly induced by a recent exceptional increase in international commodity prices and exchange rate movements.

For the past three weeks, the Sensitive Price Index has been declining sequentially before rising slightly during the week ended December 16, 21. The major respite was witnessed in essential food items namely tomatoes, potatoes, onion, chicken, and sugar as the prices of said items dropped by 44%, 20%, 16%, 23%, and 9%, respectively.

This is expected to seep into general inflation where the calculations suggest a decline of 1.2% MoM in food inflation. However, due to a higher base, food inflation will likely remain in double digits at 12.8% for December’21, as noted by Wajid Rizvi, Head of Strategy and Economy at JS Global.

To note, the SBP has revised its inflation outlook in the latest Monetary policy announcement in light of the recent inflation outturns to 9-11% for FY22 from the previous 7-9% as it continues to soar to 11.5% in November against 8.7% on average in the prior four months.

Throughout the year 2021, SBP increased the policy rate by 275 basis points but the real interest rate is still hovering in the negative territory at 2.8%. 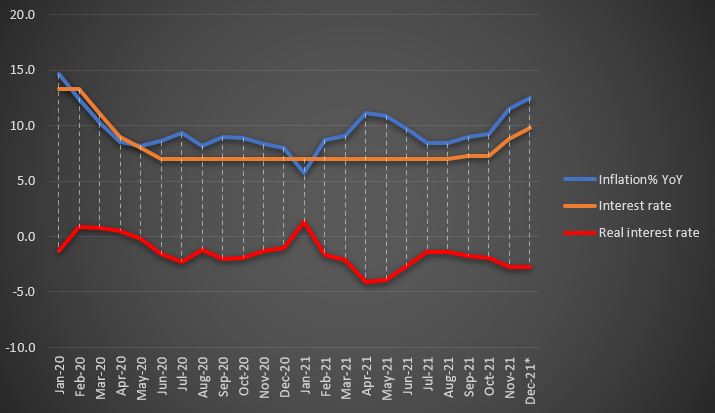 In the backdrop of cooling down oil prices in the international market, the government on December 15, 2021, had declined the petroleum prices by Rs5 per litre against the proposed reduction of Rs 11 per litre by the Oil and Gas Regulatory Authority (OGRA).

Meanwhile, the government has also increased OMC dealer margins which took away Rs5.5 per litre of the proposed decline. The reduced fuel prices by only 2% on a sequential basis has only a 1% impact on the transport index.

Meanwhile, the upcoming mini-budget/budget amendment bill is being presented to the special committee of the cabinet for approval today, will likely impose a unified GST regime and withdraw the tax exemption of Rs350 billion will ignite more inflationary pressure in months to come.

Going forward, the inflationary pressures have not subsided with the recent decline in essential food prices. Since international oil prices continue to ease over emerging demand concerns after the spread of Omicron triggered travel restrictions across Europe and other regions, there is a possibility that the decline will be subdue by the monthly Rs4 per litre hike in petroleum levy of fuel rates as well as the increase in the sales tax if any.

Moreover, January 2022 is slated to witness the stipulated house rent index adjustment which keeps inflationary expectations elevated as we enter CY22. Some respite may engender as we move beyond Jan-2022 while more decline in international commodity prices can trigger as global central banks move to reduce the pace of asset purchase programs and/or increase rates, Wajid Rizvi said.

Nonetheless, the MPC in its latest outlook said, “As global commodity prices retrench, administered price increases dissipate, and the impact of demand-moderating policies materializes, inflation is expected to decline toward the medium-term target range of 5-7 percent during FY23.”

With regards to monetary policy, the SBP communicated that it would likely keep the policy rate “broadly unchanged in the near term”, believing the recent monetary policy actions are sufficient to moderate demand pressures in the coming months and meet mildly positive real interest rates in the medium term- unless future inflation and current account deficit (CAD) data suggest otherwise.