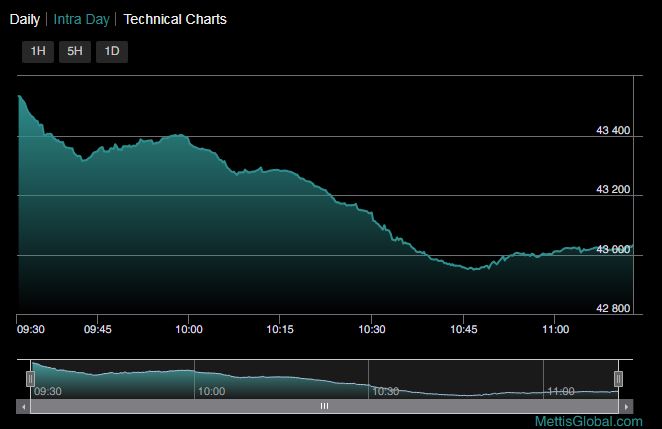 Commercial Banking Sector was down by 114.04 points, Cement sector since the open has lost 93.40 points, Oil and Gas Exploration Companies Sector is negative by 88.45 points; the sectors continue to bleed due to a negative sentiment prevalent in the market.

SSGC seeks approval of price hikes as the petitioner has asked the authority to approve a price increase of Rs 109.03 per MMBTU with effect from July 1 in its tariff for the financial year 2018-19.The OGRA has asked consumers to furnish their comments on the petition. The OGRA has also decided to hold public hearings in Karachi on May 14 and Quetta on May 16. The ERR for financial year 2018-19 has been worked out requesting an increase of Rs 39.030 billion (Rs 109.03 per MMBTU in SSGCL prescribed price effective from July 2018) in indigenous gas business and Rs 10.5 billion are required in RLNG business which include Rs 10,251 for transportation business and Rs 254 million for distribution of RLNG to SSGCL customers., according to a report on Business Recorder.

Moreover, Textile Package is also expected to be announced next week. Finance Minister Miftah Ismail Saturday said the government will announce a export package next week with a view to increase exports to $27 billion in the next fiscal year. The government will release around Rs. 100 billion to exporters under the sales tax refunds before the end of its tenure, he assured the members of Council of All Pakistan Textile Associations (CAPTA) at a meeting held at the PHMA House.

Moreover, on the request of defence authorities, the federal government has finally ordered immediate suspension of unauthorized operations at two key oil installations at Kemari in Karachi being carried out by private oil marketing companies (OMCs) without prior security clearance, it emerged on Sunday.

Furthermore, The Economic Coordination Committee ECC has approved the financial restructuring of PIA after a detailed review of PIA's Strategic Business Plan 2018-22.

Fertilizer sector is likely to act positive as fertilizer industry has warned of a further increase in urea prices as government is looking reluctant to release pending subsidy claims, which could prove a political setback for the current PML-N administration in upcoming general elections. Furthermore, Fertilizer manufacturers have informed the government that companies may further increase the price of urea by Rs200/50kg bag in case the government failed to release the unpaid subsidy worth Rs20 billion to the industry.

Hascol Petroleum gets a new CEO

First, the Board of Directors has decided that the Company may undertake the business of REIT Management Services under the Real Estate Investment Trust Regulations, 2015, in combination with its existing business, subject to the prior approval of Securities & Exchange Commission of Pakistan ("SECP").

For this purpose, the Board has also approved the necessary alterations in the  Memorandum of Association of the Company, subject to the prior in-principle approval of SECP and subsequent approval of the shareholders by a special resolution.

Second, the Board has approved the merger of JS LCF and JS VF (collectively referred to as the "Merging Schemes" with and into JS GF (the 'Surviving Scheme).

The approved merger is subject to the approvals by the unitholders and Trustees of the schemes, Securities and Exchange Commission and other regulatory requirements, after which the net assets of JS LCF and JS VF will be transferred to JS GF on the effective date to be announced by the management company in due course.

As a consideration, the unitholders of IS LCF and IS VF will be issued units of IS GF based on the swap ratio of the effective date of the merger.

The management of the company further stated that the merger will give the unitholders of surviving scheme to benefit from economies of scale due to lower expense ratio, resulting in fulfilling the investment objectives and policies more economically and efficiently.

Meanwhile, it is important to mention that “the investment amount of all the unit holders will remain unaffected except for the impact of capital gain tax, where applicable. The units of the surviving scheme will be issued to the unitholders of the merging schemes (as consideration) in accordance with the swap ratio to be determined on the basis of the net assets of each of the schemes on the effective date,” the notification said.

Hascol Petroleum gets a new CEO

February 24, 2020 (MLN): The Board of Directors of Hascol Petroleum Limited has appointed Mr. Waheed Ahmed Shaikh as the Chief Executive Officer in place of Mr. Salem Butt with effect from March 4, 2020.

It maybe noted that Mr. Saleem Butt had submitted his resignation as CEO of the Company due to personal reasons, which was accepted by the Board subject to ninety days’ notice as per his employment contract commencing from December 20, 2019.

Mr. Shaikh has extensive experience in the Energy sector encompassing business management, supply chain management, and operations management. Mr. Shaikh was previously the Chief Executive Officer of Al-Dabbagh Group and played a pivotal role in the acquisition of the Petroleum Corporation, Al-Dabbagh Group’s wholly-owned entity, and turning around the company into a highly successful business.

Prior to joining Al-Dabbagh Group, he spent 12 years working in Shell Pakistan Limited, where he held various senior positions in their downstream oil business in Pakistan.

Sale of DAP registers a substantial decline of 41%...

DAP offtake during January 2020 decreased in Punjab, Sindh, and KP by 32, 75 and 14 percent respectively, whereas it increased by 36 percent in Balochistan.

All Asian Stock Markets down including Pakistan

Urea offtake witnesses a drop of 53.6% in January

Going by the data released by National Fertilizer Development Centre, urea offtake during the month decreased by 58, 55 and 25 percent in Punjab, Sindh, and KP respectively. Its offtake increased by 42 percent in Balochistan.

Auto sales decline across the board in FY20

No plans to discontinue issuance of 5,000 notes: Finance ministry

Murad takes up deduction of Rs. 6 billion from Sindh Government Account with FBR,...

JS Investments to undertake business of REIT Management Services with its...