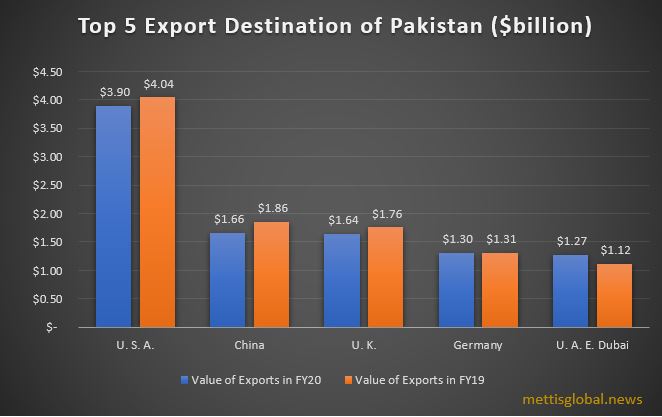 China appeared as the second major destination country in FY20 wherein Pakistan exported goods worth $1.66 billion against the exports of $1.85 of FY19, down by 11% YoY, followed by the UK with $1.63 billion.

According to the export data released by SBP, USA remained as a top export market during the month of June with exports reaching $308 million against the exports of $237 million of May’20, showing a significant increase of 30% MoM on an account of gradual lifting of lockdown restrictions and reopening of economies. While on a yearly basis, Pakistani exports to the USA decreased by only 2%.

In the month of June’20, the other countries which contributed a large proportion to Pakistan Export earnings are UK, China, Germany, UAE (Dubai), and the Netherlands.

The second major destination country in June’20 is the United Kingdom wherein Pakistani exports to the UK increased by 39% MoM and 8% YoY to stand at $146 million.

This was followed by China, wherein the total exports to China during the said period were recorded at $128 million against the exports of $124 million of May’20, showing an increase of 3% MoM. On a yearly basis, exports to China dropped by 19%.

Among other countries, Pakistani exports to UAE (Dubai) stood at $102 million, up by 30% MoM while showing a marginal decline of 1% YoY, followed by the Netherlands with $74 million. The exports to Afghanistan were recorded at $63 million, the data revealed.