HomeForexPKR jumps by over four rupees in early trade
Forex

PKR jumps by over four rupees in early trade

August 10, 2022 (MLN): Extending its gain further, the Pakistani rupee (PKR) on Wednesday gained over four rupees in the interbank market with trades being reported at 220 against the greenback compared to the previous close of 224.04 per USD.

Owing to the improving economic fundamentals, the domestic unit is keep on appreciating against the dollar. Along with better-performing macros, the export proceeds have played a vital role in the ease in dollar demand.

On the upside, the United Arab Emirates intends to invest $1 billion in Pakistani companies across various sectors, the state news agency (WAM) reported citing an official source in Abu Dhabi.

The UAE is keen to continue cooperation with Pakistan "in various fields, which include gas, energy infrastructure, renewable energy, health care," the agency added.

In an interview with CNBC, he stated that there were concerns regarding Pakistan getting into Sri Lanka-type situation but with significant change measures, the situation has been avoided. 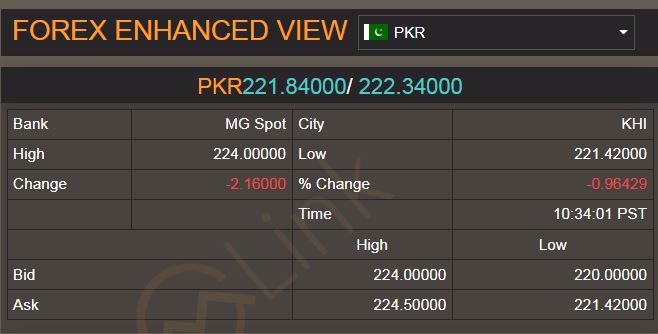 PKR at interbank gains Rs2.16 against the greenback