PKR: Gone to Rack and Ruin 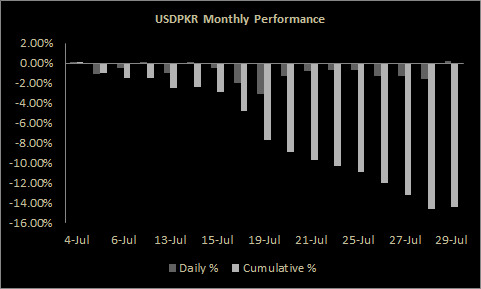 August 03, 2022 (MLN): The first month of FY23 remained full of hard knocks to the already troubled Pakistani rupee (PKR) as it plummeted by 34.52 rupees or 14.42% during the month, witnessing an all-time low of 240 per USD on July 28, 2022, during intraday trade and all the credit goes to economic uncertainty on the absence of IMF tranche in times of fast melting foreign exchange reserves and political noise.

The local unit has been on a choppy trail for a long on economic fundamentals but it started falling precipitously over the past four months, after the ouster of former Prime Minister of Pakistan Imran Khan. Since the coalition government has taken a charge in April 2022, the local unit has been crushed by over twenty rupees or 11%.

Earlier, the Chinese $2.3 billion were gained the major attraction in the interbank market and PKR saw some respite but all the marginal gains have been lost due to continuous delay in IMF tranche, melting reserves that are currently standing at $14.4bn.

Zafar Paracha, President of Exchange Companies Association of Pakistan (ECAP) told Mettis Global, “No significant measure by the government to halt the freefall of PKR indicates that currency depreciation may be a part of IMF agreement.”

While saying so, he suggested the government curtail their unnecessary expenditures so that the country could keep away from further debts.

Otherwise, the country will face a deteriorating situation of law and order just like Sri Lanka, he added.

It clearly reflects that market strings are in IMF’s hand. To regain stability in the interbank market, and the confidence of traders and foreign banks who have clearly refused to open the LCs for Pakistani importers, IMF’s tranche is crucial.

During this whole blood bath, all the eyes were on the State Bank of Pakistan (SBP) as traders, economists, and analysts were waiting for its intervention to arrest the PKR’s slide to the bottomless pit.

However, SBP termed this strong depreciation a feature of a market-determined exchange rate system.

Under this system, the current account position, relevant news items, and domestic uncertainty together determine daily currency fluctuations, it said.

As per the latest development, Dr. Esther Perez Ruiz, IMF’s Resident Representative for Pakistan on Wednesday said, "Pakistan has completed all prior actions for loan review."

So, technically this development should unlock the tranche of $1.177 billion, bringing total disbursements under the program to about $4.2bn which would further improve the dollar PKR parity.

The government on the other hand, in an attempt to arrest the prevailing uncertainty in the market, issued a rare joint statement with the central bank on July 31, saying that the rupee is expected to gradually strengthen as the current account deficit is expected to narrow going forward.

The reason behind this expected respite is the drop in import bills due to the decrease in oil prices.

While refuting the rumors that a particular level of the exchange rate has been agreed upon with the IMF, the Ministry of Finance and SBP called them completely unfounded.

As the current account deficit is curtailed and sentiment improves, we fully expect the Rupee to appreciate, the statement further added.

Similarly, Federal Minister for Finance and Revenue Miftah Ismail also said the same in the later press briefings and interviews. In his recent interview with Bloomberg, he was of the view that Pakistan sees a way out of its current economic crisis without descending into default.

He attributed this development to the progress on a stalled IMF loan as well as spending cuts.

Dollar is bullish across the board:

Another group of analysts is of the view that PKR is “No exception” as the greenback has been bullish against almost all the major currencies.

Along with PKR, the recent bullish rally of the dollar has crushed other major currencies as well. Especially, the slide of the Euro against the USD also remained in the limelight during the whole month.

As Russia threatens to cut off gas to the west and inflation rates soar, sparking fears of a European recession, the Euro and the greenback have become equal for the first time in 20 years.

Globally, the US dollar has surged by 12% in the last 6 months to a 20-year high, as the Fed has aggressively raised interest rates in response to rising inflation.

Speculators in a sweet spot:

It has been observed that economic experts, analysts, and presidents of different currency forums have been highlighting the presence of the element of speculation but no significant action has been taken to remove this element from the market.

Lack of confidence in the market amidst political uncertainty and the absence of IMF tranche keep strengthening the element of speculation which resulted in the seesaw pattern.

The business community also claimed that commercial banks are involved in the speculation of dollar. Hence, they called for the intervention of the Competition Commission of Pakistan (CCP) to resolve this issue.

The businessmen also demanded to appoint an SBP governor and in their response, Finance Minister assured the appointment of a governor in days to come. However, no development has been observed yet on that front.

According to the latest IMF’s statement pertaining to Pakistan’s fulfillment of all the major conditionalities, and the government hints at improving the economic fundamentals of the country, the local unit will take a breather in days to come.

Particularly, right after the arrival of the IMF tranche, PKR may see some strong appreciation as a result of a significant decline in chaos going on in the interbank market.

Experts are of the view that PKR is undervalued against the US dollar as soon as the political and economic uncertainties start wiping off, it should move back to 190-192 per USD.

“Given the macroeconomic situation, PKR should not be above 190 per USD in short-term while in long-term I foresee PKR at 160 per USD,” Zafar Paracha said.

Speaking to Mettis Global, Malik Bostan, President of Forex Association of Pakistan said, “There are notable developments underway that would support PKR to gain back its ground in coming days.”

The coalition government is in talks with Saudi Arabia to enhance the oil facility on delayed payments facility to $3.6bn from the existing $1.2bn facility.

United Arab Emirates (UAE) has also offered to buy minority shares in publicly-listed companies at a negotiated price in response to Pakistan’s request for fresh loans, he added.

He also suggested that the government should avail of the option of barter trade with Afghanistan to avoid the outflow of dollars.

For the import of oil at cheaper rates, the authorities should get in touch with Iran. This way, the government would be able to save $24bn.