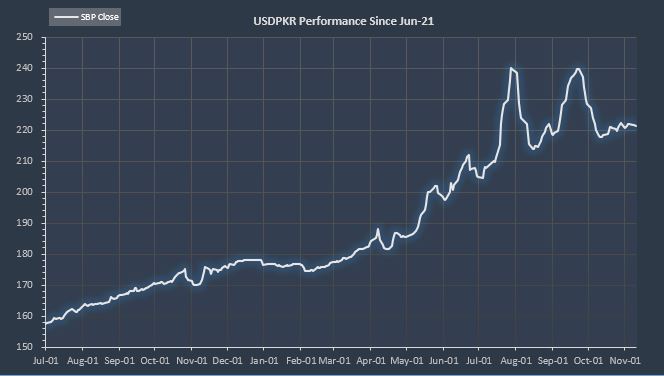 November 10, 2022 (MLN): Resting on stable ground on the back of optimism created by the positive news flows, the Pakistani rupee (PKR) managed to gain 23 paisa against the US dollar in today's interbank session as the currency settled the trade at PKR 221.42 per USD, compared to previous session's closing of PKR 221.65 per USD.

The demand for the dollar remained dimmed in today’s session mainly due to the presser issued by the central bank in which it warned that with the help of the Federal Investigation Agency (FIA), joint action against illegal foreign exchange operators and speculators across the country.

SBP and FIA have jointly initiated action against illegal foreign exchange operators in Pakistan. To this effect, joint teams from SBP and FIA shall identify and take penal/legal action against the perpetrators so as to curb speculation and the grey market.

In addition, the positivity has further strengthened on the approval of $500 million co-financing for Pakistan under Building Resilience with Active Countercyclical Expenditures (BRACE) program by the board of the Asian Infrastructure Investment Bank (AIIB).

Meanwhile, the currency gained 2 rupees against the Pound Sterling as the day's closing quote stood at PKR 252.49 per GBP, while the previous session closed at PKR 254.49 per GBP.

Similarly, PKR's value strengthened by 6 paisa against EUR which closed at PKR 221.7 at the interbank today.

On another note, within the money market, the State Bank of Pakistan (SBP) conducted an Open Market Operation (OMO) today, in which it moped up Rs18 billion from the market for 1 day at 14.98%.

Rupee appreciates by 26 paisa against greenback

SBP rebuts placement of any restriction on LCs