HomeForexPKR climbs up by 15.3 rupees in a week
Forex

August 05, 2022 (MLN): Owing to the positive triggers such as a positive statement by the IMF pertaining to the fulfillment of all the conditionalities, and the lower import volume recorded in July 2022 which narrowed the trade deficit by over 40%, the Pakistani rupee (PKR) gained 15.3 rupees in five sessions against the greenback to close the week’s trade at PKR 224.04 per USD.

Maintaining its gaining streak, in today’s session, the local unit has appreciated 2.1 rupees compared to yesterday's closing of PKR 226.15 per USD.

The rupee endured a highly volatile trading session with quotes being recorded in a range of 47.39 rupees per USD showing an intraday high bid of 225.24 and an intraday Low offer of 224.00.

The strong appreciation of the rupee reflects an improvement in liquidity in the interbank market on the back of higher export proceeds. In addition to it, the notable decline in imports which narrowed down the trade deficit played a vital role in order to improve market sentiments.

Federal Minister for Finance and Revenue Miftah Ismail stated on Monday, "Government’s efforts to reduce imports have now finally started showing results and the government is keen to work on making the economic crisis less."

On the same day, in an interview with Bloomberg, while giving a clue of upcoming stability he said that Pakistan sees a way out of its current economic crisis without descending into default, thanks to progress on a stalled International Monetary Fund (IMF) loan as well as spending cuts.

Meanwhile, on the IMF front, Dr. Esther Perez Ruiz, IMF’s Resident Representative for Pakistan on Wednesday said, "Pakistan has completed all prior actions for loan review."

So, technically this development should unlock the tranche of $1.177bn, bringing total disbursements around $4.2bn which would further improve the dollar PKR parity.

On Friday, in a session with capital market participants at PSX, he said, “With import curb, PKR saw a massive recovery and it will see further respite in days to come.”

He also added that he would not allow imports to rise for three months and, in the meantime, the government will come up with a policy.

“I understand that growth will be reduced for a bit but I have no other choice,” he noted.

Talking about the outlook of the domestic unit, Malik Bostan, President of Forex Association of Pakistan said, the rupee’s stability and duration of the bull run depend on the political situation. If the government does not go for early elections, the certainty will prevail in the market and the rupee will bounce back to 180-190 per USD.

He also appreciated the efforts being made by the State Bank of Pakistan (SBP) to remove the volatility in the exchange rate and the difference between the interbank rate and the rate offered by Exchange Companies (ECs) and banks to their customers. 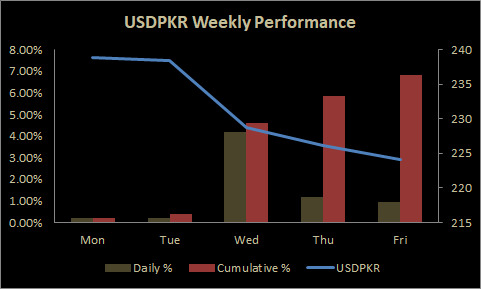 Meanwhile, the currency gained 2.5 rupees against the Pound Sterling as the day's closing quote stood at PKR 272.44 per GBP, while the previous session closed at PKR 274.91 per GBP.

Similarly, PKR's value strengthened by 1 rupee against EUR which closed at PKR 229.2 at the interbank today.

On another note, within the money market, the central bank conducted an Open Market Operation (OMO) in which it injected Rs996bn into the money market through reverse repo purchase.

PKR gains 84 paisa against US dollar in a week