Home Forex PKR appreciates by 1.2 rupees over the week 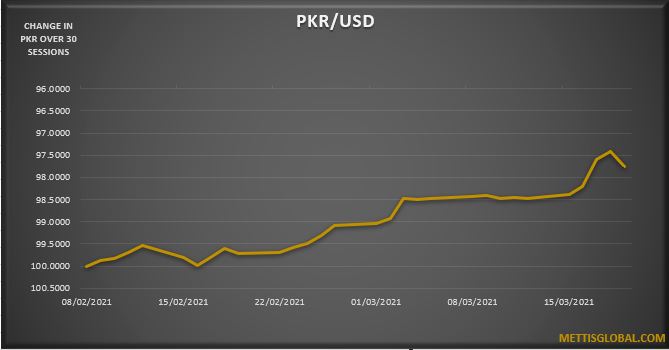 On Friday, the demand for dollars remained higher than the supply which dragged the rupee lower against the greenback. Commenting on the bounce-back of USD in late trading hours on Thursday, Asad Rizvi, Former Treasury Head-Chase Manhattan Bank said on his Twitter account, ‘Yesterday late USD surge was witnessed. Normally such moves occur on Short Covering/CB buying of $. Oil is a big BIG-TICKET item, but yesterday there was no OIL-related payment. Large Local & a Foreign Banks were buyers.’

According to some analysts, the central bank was likely buying dollars to prop up its reserves, however, there was no independent confirmation.

The rupee traded within a very narrow range of 75 paisa per USD showing an intraday high bid of 156.10 and an intraday Low offer of 155.50.

During the week, the currency has gained 1.2 rupees against the greenback, as the previous week was concluded at PKR 157.14 per USD.

Meanwhile, the currency lost 38 paisa to the Pound Sterling as the day's closing quote stood at PKR 217.48 per GBP, while the previous session closed at PKR 217.1 per GBP.

Similarly, PKR's value weakened by 16 paisa against EUR which closed at PKR 185.89 at the interbank today.

On another note, within the money market, the State Bank of Pakistan (SBP) conducted an Open Market Operation in which it injected Rs.1,220 billion for 7 days at 7.04 percent.

PKR appreciates by 61 paisa over the week

Pakistan in the process of renegotiating TAPI gas price with TPCL